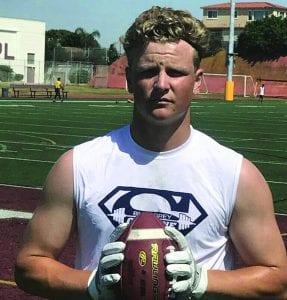 Hearing the distressing news of the passing of 17-year-old William Burton left me dismayed.

I didn’t know William personally but I knew of him.

Among other things, I cover the Valley Center football beat and as a result, I had the chance to watch Burton in action on two occasions this past season. In a regular-season game, the Jaguars got the best of Burton’s Granite Hills team (29-7) in late September. But the Eagles exacted major revenge approximately two months later with an impressive 49-30 Division II quarterfinal playoff win over the host Jags.

In both those contests, Burton was conspicuous. At 6-foot-five and 240 pounds, no one on the field filled out a uniform quite like William did – his No. 19 white jersey seemingly casting a large shadow that was clearly indicative of his superior talent.

Whether he was on the receiving end of a pass or being a meancing disruptor along the defensive line, Burton was a force to be reckoned with. His physicality and brute strength were tangible and transmitted all the way up to the press box.

How accomplished was Burton as a gridster? Well, not only did he lead the Eagles in receptions (28) and receiving yards (287) but he was also an absolute beast on the other side of the ball, recording 18 tackles for loss which included 5.5 sacks. William’s prowess was such that he was a San Diego All-CIF first-team selection as a defensive lineman.

Burton’s football future seemed exceedingly bright with schools such as Washington, Oregon State and UCLA having expressed interest in possibly bringing him onboard. Moreover, the versatile Burton had also made waves as a hard-throwing lefthander for the Eagles baseball team and was entertaining the thought of perhaps trying to participate in both sports at the collegiate level.

Tragically, because of an ill-fated car crash, he’ll never be given the chance to maximize his athletic potential. Cruel fate saw to it that he’d wouldn’t be given his full shot, be in on the field or more importantly, in the game of life.

Whenever any youngster is the victim of any sort of death, be it natural or not, it engenders a feeling of profound sadness and a haunting wistfulness of what might have been. And for me, being a sportswriter, a young athlete’s untimely end carries with it a particular sense of poignancy and loss.

By all accounts, Burton was every bit the winner as a person as he was in the sporting arena. Known to own a positive spirit as well as being fun-loving, well-liked, articulate and loyal, the influence that William exerted over both his school and community is reflected by the heartfelt outpouring being expressed in the aftermath of his death. A great part of his legacy will be told in the many lives that he genuinely touched and affected in the East County.

As someone who truly lived the meaning of student-athlete (Burton carried a 3.5 GPA), William also talked of answering to a higher call, that of possibly joining the military. Had that been the case, America would have greatly benefitted from having such a stout soldier who had demonstrated real leadership potential.

Going into any sort of detail involving the circumstances of accident that would claim his life seems rather pointless at this stage. It certainly won’t alter the terrible outcome, nor will it in any way ease the crushing anguish that his surviving parents and two brothers are now experiencing. Heartbreak of this type can never really be understood or fathomed by those fortunate enough to escape its horrific clutches. It leaves in its wake a devastation and emptiness so extreme that it brings people to their knees and gouges out a massive wound that won’t ever coalesce. There are events in the human experience that one can never get over and a catastrophe of this magnitude ranks right at the very top of that list.

As I read and heard about the misfortune that struck down William, my mind immediately drifted back to an eerily similar situation many years ago that befell another young man of great promise. His name was Kevin and like Burton, he was a multi-sport standout with a glowing future laid out before him. Having already been accepted to Notre Dame, he was never to enjoy the high of wearing a Fighting Irish uniform thanks to another damnable car crash.

At the time, I was playing prep basketball in the same league (Western) that Kevin also participated in. Soon after his passing, I remember talking with the star pivot man of Madison High prior to a game. We both shook our heads in disbelief, still unable to process the fact that a passionate competitor that we both greatly admired was no longer around. We mused about the injustice of it all and how it brought the specter of mortality into our lives, something teenagers seldom think about or reflect upon.

As we exchanged a handshake before the tip-off, there was no mistaking that neither of us would ever forget Kevin’s death – a death that would somehow always resonate in our lives, no matter the encroaching fog of father time.

So when I heard of William, the image of a focused Kevin – raven-black hair, as athletic as can be and determined beyond words – came flooding back. He stood there right before me as he had in the prime of his youth. It was almost as if I’d once again have the chance have a go at him, one-on-one. As I always knew, his memory had never left me. It just needed a trigger to instantaneously bring it back to the surface.

Two tragic and dumfounding events – yes, separated by a significant continuum of space and time – but nonetheless, defined by the same gut-wrenching result.

A pair of special young men denied the chance to reach their full bloom and leave an even more pronounced impact on a world crying out for their contributions. It doesn’t get much harsher than that. Both William and Kevin should be alive and well as this is being written. That fact that they aren’t speaks to the unpredictable vagaries of life and its often inherent unfairness. Their premature deaths can never be reconciled and their loss will forever trouble all of us who simply ask WHY!