At Pegah’s Kitchen they know your name 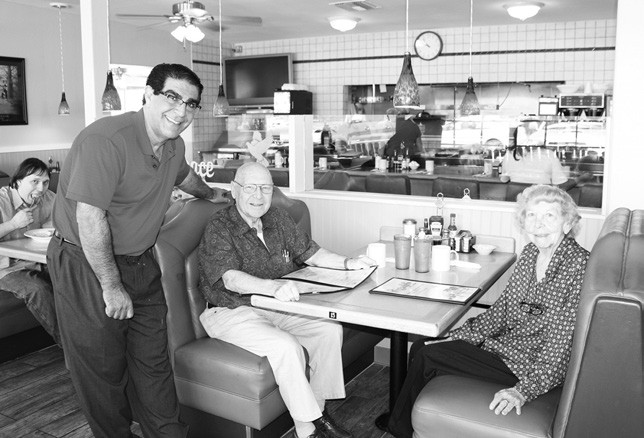 It’s like “Cheers,” except it’s Pegah’s, and good classic diner food instead of beer. But everybody does know your name.

Well, maybe not everybody, but at Pegah’s Kitchen, (formerly the Westside Café), the waiters and the owner probably will be greeting you by the time you come in a couple of times for the classic American diner fare.

“I try not to let anyone walk out of here unhappy because I want their business!” declares Fred Soleimani, who, with his wife Sara, is the owner and manager of Pegah’s. The name derives from their daughter, Pegah (they have two boys and one girl). “We called the first restaurant we opened in Kansas City, Pegah’s,” recalls Fred. The name Pegah means “dawn.”

Fred came to the United States from Iran in 1979 in pursuit of an engineering degree. However, 1979 was the year that the Shah was overthrown during the Iranian Revolution and he decided to stay. During school he had to work to pay for his college education and he became involved in the restaurant business. “I loved it!” he recalls.

He got his engineering degree, all 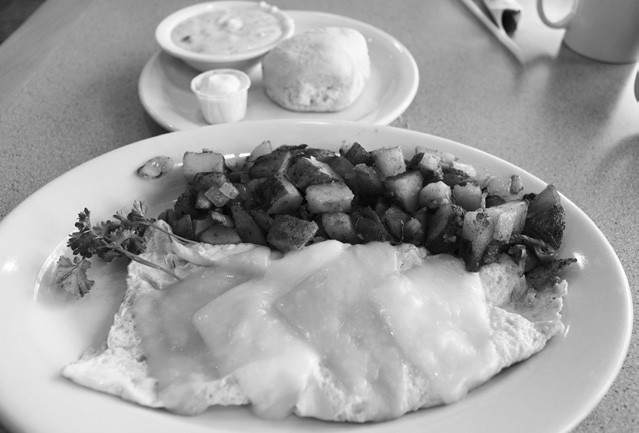 Hearty fare: The cheese omelet, home fries with a side of biscuit and gravy.

right. But given the turn that his life took in the restaurant business, has never had an occasion to use it.

Fred came to love the kind of food that you find in classic American diners, such as chicken fried steak, omelets, Reuben sandwiches, biscuits and gravy and such fare has always been served at the restaurants he has owned. They are open for breakfast and lunch only. “I’m comfortable with it,” he says.

And so, obviously, are his customers. Many are repeat customers, some coming almost every day. They come, Fred Soleimani believes, for the “good food, good atmosphere and good service. I try to make customers comfortable.” He smiled, “Everyone says the restaurant business is a hard one—but not for me. I enjoy it.”

He greets customers by name. “One customer told me that he comes here because he doesn’t like sitting off by himself. People here greet him by name.”

Asked what dishes are the most popular at Pegah’s, Fred thought for a minute and then said, “Our omelets are really good and the country friend steak and eggs is a big seller.” 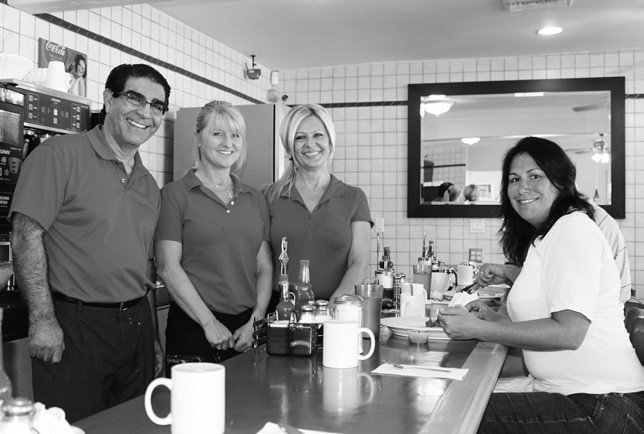 Fred Soleimani and his staff banter with a customer.

can attest to the fluffiness of the cheese omelet that I tried and the crunchy potatoes of the home fries that accompanied it. The country gravy that comes with the biscuits and gravy is also very tasty.

I dropped by the table of Dean & Lucille Key, a seasoned couple who said that they visit the restaurant two to three times a week, and also frequent the San Marcos location. Her favorite meal is the “Super Bird,” which is a sandwich heavy on the turkey, and his is the huevos rancheros.

There is a special every day and 80% of the dishes are homemade with the freshest ingredients available.