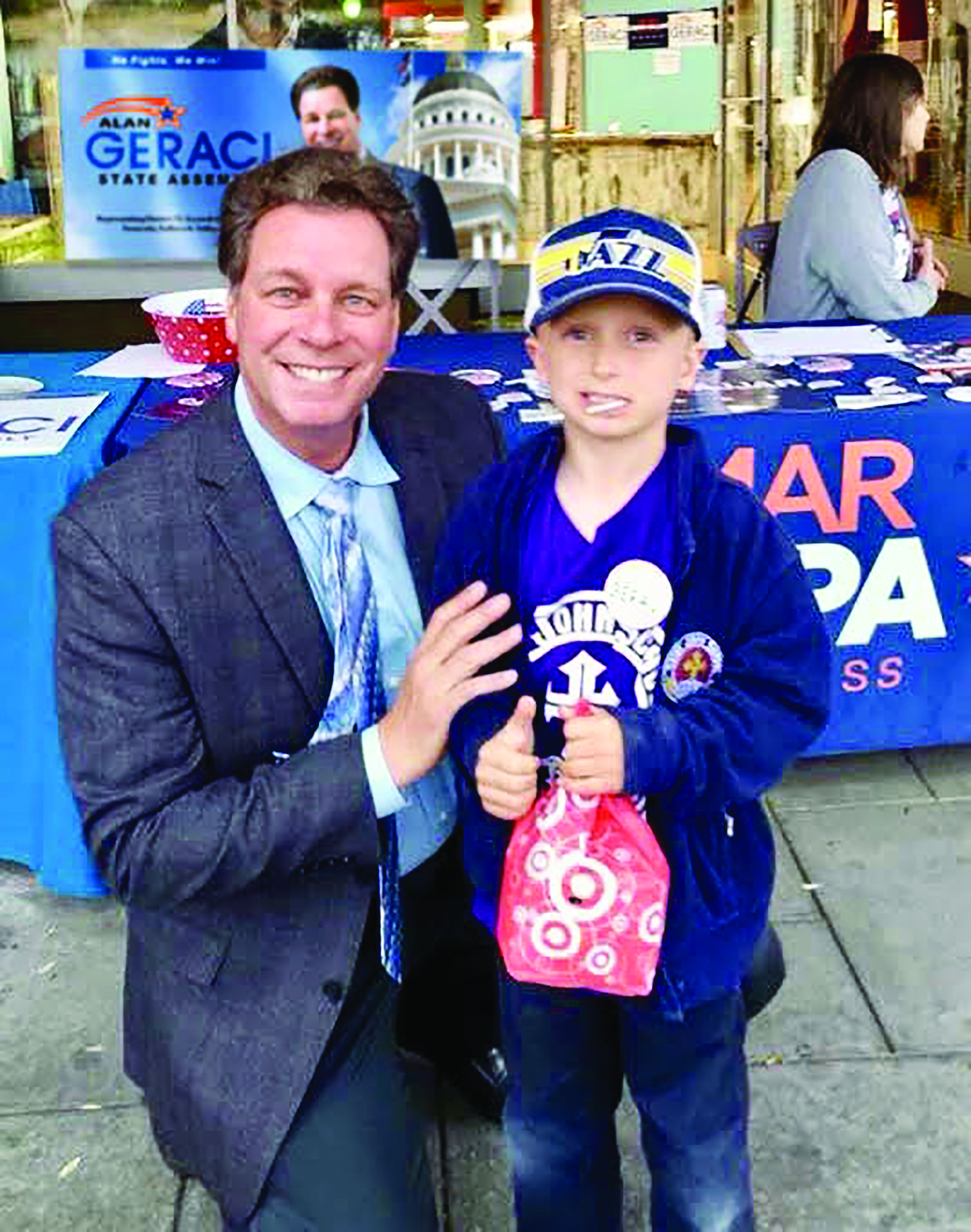 Alan Geraci outside his Escondido campaign headquarters during Cruisin’ Grand with first grader James, who told Alan, “I’m going to ask my entire class to vote for you.” Note: James’s Mom, Sarah is a supporter and took the photo giving Geraci permission to use it for publication.

Asked why he is running for the 75th Assembly District currently represented by Marie Waldron, Alan Geraci began, “I’m running because in my view the district has been unrepresented by the current representative. She has been nonresponsive to the community’s needs. She doesn’t have town hall meetings. The one thing I have heard in the five larger community areas is ‘We don’t see Marie Waldron anywhere. She is non-responsive to our letters. We can‘t visit her office and we don’t know what she is or isn’t doing for us.’ As a constituent I had asked her position on a number of bills and got no response. I was tired of it and decided that last year I would run because our residents deserve more.”
Geraci’s main theme when discussing his opponent is her alleged non-response. “I first learned of her when she was a sponsor of an Escondido city ordinance in 2006 to make it illegal for landlords to rent to undocumented immigrants. That ordinance was challenged in court and a federal judge issued a permanent injunction to overturn that law,” he says. “It cost the city over 250,000 in attorney fees. I hear that story from residents in Escondido even today.”
He adds, “I think one of the reasons she has been non-responsive is that she is apparently afraid to fly so she drives. It cuts into her ability to serve the district. To understand the depth of the bills, she submitted a $30,000 expense bill because of her mileage. I don’t think that is right for the taxpayers to pay because she doesn’t want to fly. It was the largest travel expense bill ever submitted.” Geraci says he cannot personally vouch for the previous statements. “These are things that people tell me as to why she is unresponsive,” he says.
Geraci claims he has never seen Waldron in the district. “The only time I’ve ever seen her is in Sacramento, where I ran into her and said, ‘Finally we meet.’ ”
He charges that Waldron’s Escondido office is almost always locked and it says on the door that she sees constituents by appointment only.
This is Geraci’s first run at a public office, other than as a delegate to the Democratic Party convention. In defining his campaign, Geraci says, “The largest issues in my view are economic issues: health care, affordable housing, mitigation of traffic and transportation issues and homelessness, followed by proper funding of our public schools.”

Health Care
Geraci supports a single payer health payer system. “California has a bill that has passed the Senate and is sitting in the Assembly awaiting action: Healthy California ACT SB 562. It’s a very good bill and obviously gained the support of the Senate.”
The bill, “pools medical, medical and other existing sources into a trust.” The bill lacks $40 billion in funding. “That can easily be made up by implementing the bill, driving down the costs of healthcare—including pharmaceuticals—eliminating the middle men—including insurance—and streamlining healthcare so that the services are provided for everybody,” says Geraci.
Geraci proposes to fund healthcare by amending the California Constitution, specifically Proposition 13, “to properly reassess properties that corporate America holds.” Disneyland, for instance, has been paying the same assessment it paid when Prop. 13 was passed in 1978. Changing that, he says, “would appropriate $85 billions of lost revenue, which could be earmarked for health care and public schools.”

Transportation
Geraci proposes what he calls a “smart growth plan.” “Under this plan we’re going to do things that create an environment for private developers working with our cities and counties to sponsor the development of projects that work for the market place and affordable housing.”
The plan, he says, would include infrastructure requirements for schools, libraries, roadways and mass transit. “Included in this plan is planning how to tackle homelessness in each community as part of the problem—and mass transit issues.”
Geraci proposes a Sprinter light rail line from Temecula, through Escondido and down to Mission Valley. “It’s in the books,” he says. }It needs the political will to get it into the political structure. People in Temecula are ready for that because they are commuting too.”
The easements are laid out in the median for I-15 he says. “The whole median has been earmarked as an easement and the electrical easement is in. It would just take the will to ease the traffic burden. It would probably need to be built in segments from Temecula to Escondido, and then to Poway and then to Mission Valley.”
This transportation plan is laid out in detail on Geraci’s website: www.geraci4assembly.org

Affordable Housing
“Affordable housing is another super issue because it affects all of California, including our district,” says the candidate. “In studying this I realized this is probably the biggest economic issue in California, which is now the fifth largest economy in the world. We currently have in our grouping of counties general plans that dictate how construction is done. San Diego County has had one since the 70s. The problem is the municipalities have been routinely creating exceptions to the general plan, allowing development that violates the general plan, without taking into account infrastructure, roods and traffic mitigation.”
His district and the county “have a big problem,” says Geraci. “They allow the building of market priced homes. The average home in our district is $570,000 and in the state it’s $480,000. People graduating in college saddled with student debt can’t enter the job market and afford to buy a market home and so end up having to rent or live with their parents. It’s becoming a larger problem in our region.”
It is also a cause of homelessness, he says. “I include homelessness in my Smart Growth Plan. It transcends housing and includes mental health treatment, which we need to address. I was surprised to learn that Escondido is the number two city when it comes to homelessness,” Geraci says.
“One only has to travel on the I-15 or I-5 to see that the construction of market price homes is causing traffic problems. More importantly, is that most new construction isn’t including affordable housing that will serve lower and moderate families,” says Geraci.
In his home town of San Marcos, “the city council authorized new homes throughout the Twin Peaks area burdening the entire community because there is insufficient housing to serve lower income residents. There are not enough schools and not enough libraries and roadways and certainly mass transit is dismal.”
The problem, he says, “Is that California is projected to grow to 50 million by 2050. Since 2005 we have been building 308 new units per 1,000 new residents so we have reached the point where the issue is statewide and is a huge problem for our state if we don’t tackle the problem.”
Geraci brings to this problem his background as Deputy City Attorney for the city of San Diego. “I worked in the real property division and I was taking on projects of assembling land to save some of the open space in the city. I was able to assembly enough land so that the 5,800-acre Mission Trails Regional Park is preserved in perpetuity for the San Diego City.” It is the sixth largest municipal park in the U.S.
Geraci also worked with the city’s redevelopment agency that transformed the old Horton Plaza and created Seaport Village. “My turf was the Marina District, and the homes that surround Horton. What I learned as an attorney is the tools of how you bring together the private sector with the public sector and enhance a region and eliminate blight by joining the private public interest, using tax credits. Developers love that. These things result in great projects that are important to the public such as rail , affordable housing and other infrastructure.”
While Deputy City Attorney, Geraci was Trial and Appellate Deputy in charge of the criminal division, supervising 35 prosecutors. “During that time (around 1985),” he says, “I saw a need to expand the criminal division’s work in domestic violence. I lobbied the city manager and city council to allow us to form the first domestic violence unit for the City Attorney’s office.” This unit had investigators and police officers who assisted in serving victims of domestic violence.
He adds, “The unit is now one of the most revered domestic violence units in the state. It grew after I left into something truly special.”
During his time as Deputy City Attorney Geraci also with the gang violence task force and liaised with the Narcotics Task Force.

Public Schools
“Public schools is a very important issue to me,” says Geraci. “My adult children are teachers. I’m very much aware of the problem.” The problem can be broken down into two parts, he says. 1) “We don’t have enough schools in my district. There is a shortage of schools in seventy-five percent of the district.” 2) Funding for schools. “We fall very short on the proper funding of our schools. The Prop. 13 amendment by itself will help in getting proper funding to our schools. I want to see our schools safe and make sure we have enough schools for our communities.” He notes he has been endorsed by the California Teachers Association and California Superintendent of Public Instruction Tom Torlakson.
On the other hand, says Geraci, “Marie Waldron is the queen of the charter schools. I am not a supporter of charter schools as it takes money away from public schools. I do understand the value of a properly placed public schools. But I don’t like how our schools are being shorted by improperly funding charter schools instead. They don’t have the same accountability and school structure that is required. There is some legislation pending that would change that. Waldron takes a lot of money from the charter schools.”

Public Safety
“I care about public safety,” says Geraci. “California is doing a very good job in gun ownership. We lead the nation and I’m happy we have good gun laws. In 17 out of 17 chances to vote in favor of public safety issues bills Marie Waldron voted 17 times against public safety gun laws that would enhance the community’s safety. Including allowing guns on school campuses. She voted against keeping all guns off campuses. She votes for the NRA position 100 percent of the time.”
He adds, “I support the Second Amendment and the responsible ownership of guns in our district by making sure that public safety concerns are paramount, which includes training and registration and insuring that the liability of using guns is in place as well.”