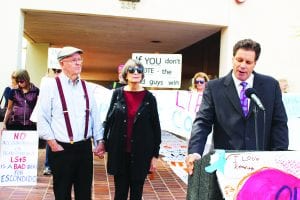 Alan Geraci, a San Marcos attorney who is also the Democratic candidate for the 75th Assembly District, is representing two local residents in their lawsuit against the city council’s approval of outsourcing the Escondido Public Library to Maryland-based Library Systems & Services (LS&S.)  The lawsuit was filed this week.

The announcement was made by the Save Our Escondido Library Coalition Tuesday morning at 11 a.m. About 50 members of the Coalition then walked the short distance from the Escondido Library to the City Clerk’s office in City Hall to serve the city papers filed previously in the Vista Courthouse.

Geraci said the city was being sued “for violating the law in privatizing this library.” He added that the city council “has usurped the authority of the library board of trustees . . . The City of Escondido has broken the law. By forcing privatization of our library, the City Council failed the community, failed the library workers, and failed to follow the law.”

The papers were hand served by Escondido native Brenda Townsend, who said during the press conference, “We will continue to fight as long and as hard as we have to, to make this Mayor and Council accountable to the people of Escondido and give us back our library for the public good.”

Geraci represents Roy and Mary Garrett, longtime Escondido residents, who claim the city violated the Ed Code in August when it approved of outsourcing the library to Library Systems & Services out of Maryland.

“This action challenges the City of Escondido’s decision, Resolution 2017-139, through its City Council, on or about October 18, 2017, as void as a matter of law as an ultra vires act. Petitioners claim that the Municipal Library Act requirement, codified at California Education Code § 18910, that its public library shall be managed by a board of library trustees and such lawful management responsibility may not be usurped by Respondent, through its council. A Writ of Mandate is required to order Respondent to comply with the law.”

Before the march, Geraci introduced the Garretts, and Debbie Resler, president of the Save Our Escondido Library Coalition. John Donel, senior librarian at the Escondido library, who recently submitted his resignation, effective December 2, also spoke.

Geraci said the lawsuit “asks for a writ of mandamus [aka writ of mandate], which is an extraordinary remedy, and not like a regular lawsuit.” He said he would ask the city attorney to stay the execution of the council’s action until a judge can hear the case, and that if the city refuses, he will ask for an injunction. 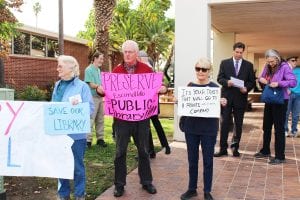 Library activists. In the background attorney Alan Geraci confers with Save Our Library Coalition Laura Hunter.

The Times-Advocate asked for a comment from City Attorney Michael R. McGuinness, who pointed out: “The lawsuit is filed only by Roy and Mary Garrett; no other plaintiffs or groups are named in the case.”

McGuinness said, “The sole cause of action contained in the 7-page Petition is pursuant to California Education Code §18910 and incorrectly premised on the theory that the contract for library services with LS&S is inconsistent with the Library Board of Trustee’s role in managing the library.”

The City Attorney added, “The lawsuit is without merit because the law does not support the interpretation Mr. Garrett assigns to the statute.  Moreover, the contract terms make it clear that the Library Board, which has assigned itself an advisory role with the City, will play an integral role in the oversight of the library and will likely be more involved in decision-making than ever before.  Mr. Garrett does not even attach a copy of the contract to the lawsuit as he likely agrees that the contract does not support his claims.  I have addressed the specifics of this claim in my letter to the Library Board of Trustees dated September 11, 2017.”

McGuinness promised to “aggressively defend the action and potentially seek sanctions for this frivolous lawsuit.”

He added, “By the way, Mr. Garrett includes in his lawsuit allegations regarding Education Code §19104.5.  See ¶16.  Subsection (a) of this statute makes it clear that it only relates to a city withdrawing from a county library system.  He was told in the past that this section does not apply to these circumstances, admitted to me his error, and yet included this reference anyway.”

Geraci, who is running for Marie Waldron’s 75th Assembly District seat, learned about the issue when he was attending a meeting of the local Democratic club, where he signed a petition against it.

According to the literature available from Save Our Library Coalition, Geraci, a San Marcos attorney, is a “consumer champion . . . who successfully fought big banks on behalf of hundreds of homeowners during the foreclosure crisis.” He defended over 300 families from foreclosure against “predatory practices caused by the great recession in 2008.” 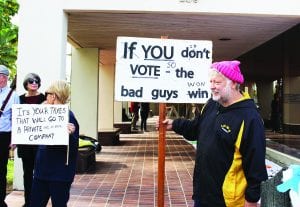 Library activist exercising the age-old right to comment on local politics by connecting it to national politics.

Roy Garrett, one of the plaintiffs, spoke briefly.  “The council majority destroyed our branch library in the face of virtually universal local opposition. Now the city manager, the mayor and City Council majority have broken faith with all the Escondido residents, taxpayers, volunteers, library employees and donors who created and nurtured this heart of our city, our 100-year-old public library, and turned it into a profit center for a corporation. Neither the law nor the citizens of Escondido can allow this to happen without challenge.”

Save Our Escondido Library Coalition President Debbie Resler told the group, “Our community has been consistent and clear; we do not want a private corporation with a bad reputation ruining our library.  Thank you, Roy and Mary Garrett, and Alan Geraci for standing up for the people of Escondido to help us legally stop this unconscionable action on the part of the Mayor and the City Council majority.”

The concluding speaker was John Donel. “As a lifelong public employee who has always worked to meet the needs of the public, I cannot in good conscience continue to work for a city government that has dishonored what it means to be a public servant,” he said.

Donel continued, “The decision to allow a poor-quality company with non-transparent management and financial practices, like Library Systems & Services (LS&S), to make a profit from a free public library, has already had a negative impact on library staff and services, as nearly 100 years of professional staff experience has been lost since the process of privatization began.”

The Coalition points out that the outsourcing was opposed by over 4,000 petition signers (anyone, not just a resident of the city, could sign) the American Library Association, and the Escondido Library Board of Trustees. The Coalition also claims that “Since the decision to move forward with the LS&S outsourcing, many experienced librarians have quit in protest.”

Several times during the run up to the October vote by the city, Roy Garrett admonished the council that it was violating the Municipal Library Act requirement of California Education Code § 18910, that its public library shall be managed by a board of library.

Garrett has crossed swords with the city in court before. In 2006, he successfully challenged the city’s ban on renting to illegal immigrants. The city settled the case, essentially backing down. 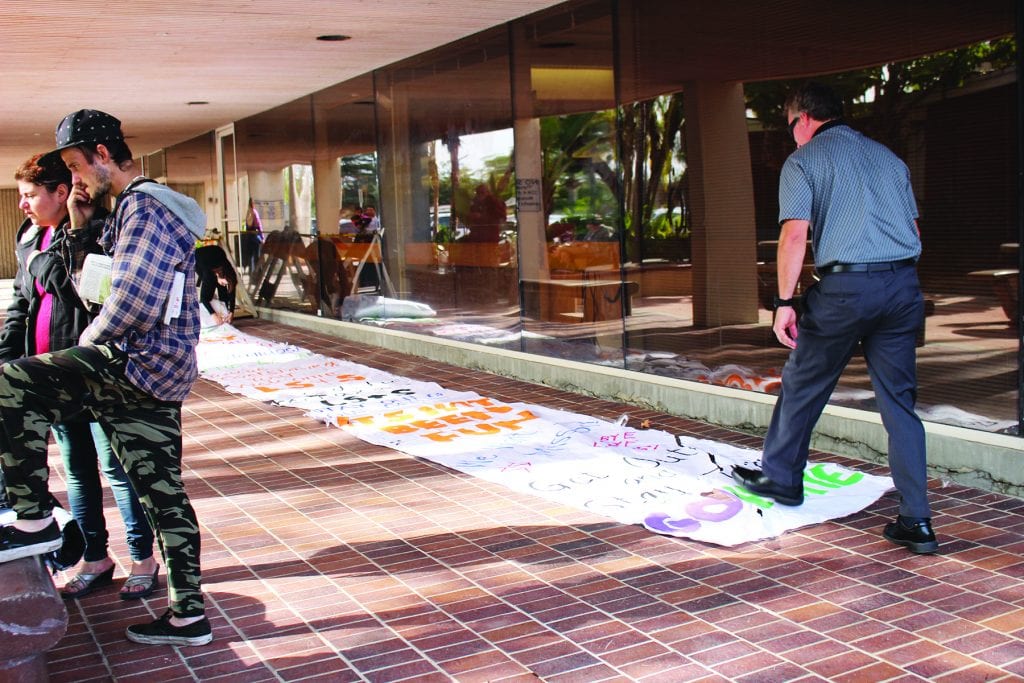 Members of the Save Our Escondido Library Coalition roll out a long handmade sign Tuesday morning shortly before the press conference. 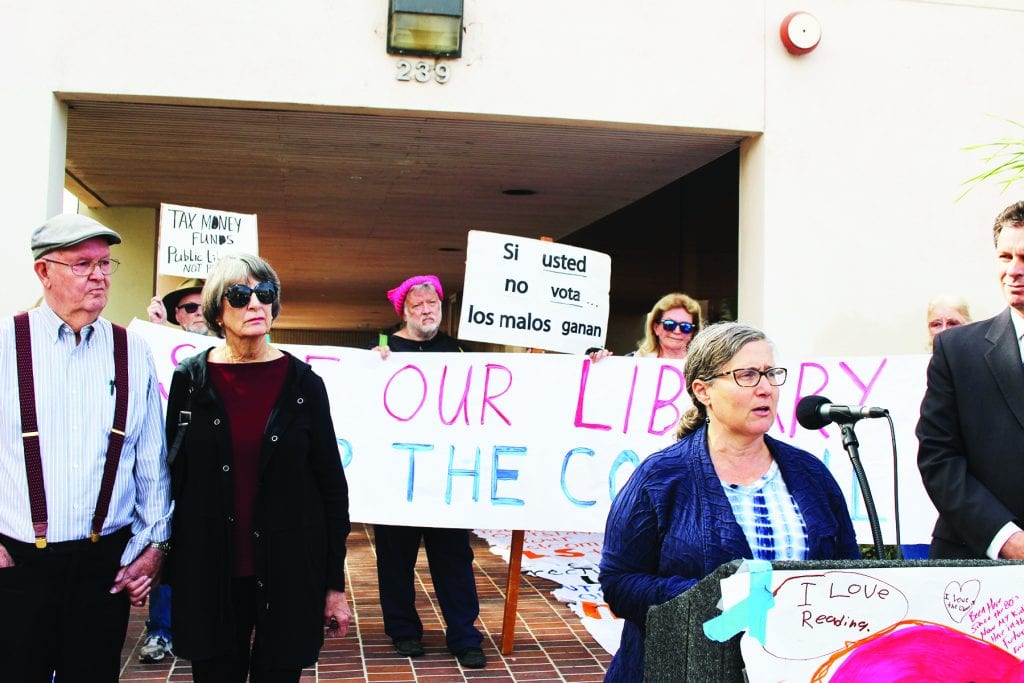 Roy and Mary Garrett, plaintiffs in the lawsuit, and Debbie Resler, president of the Save Our Escondido Library Coalition (speaking.) 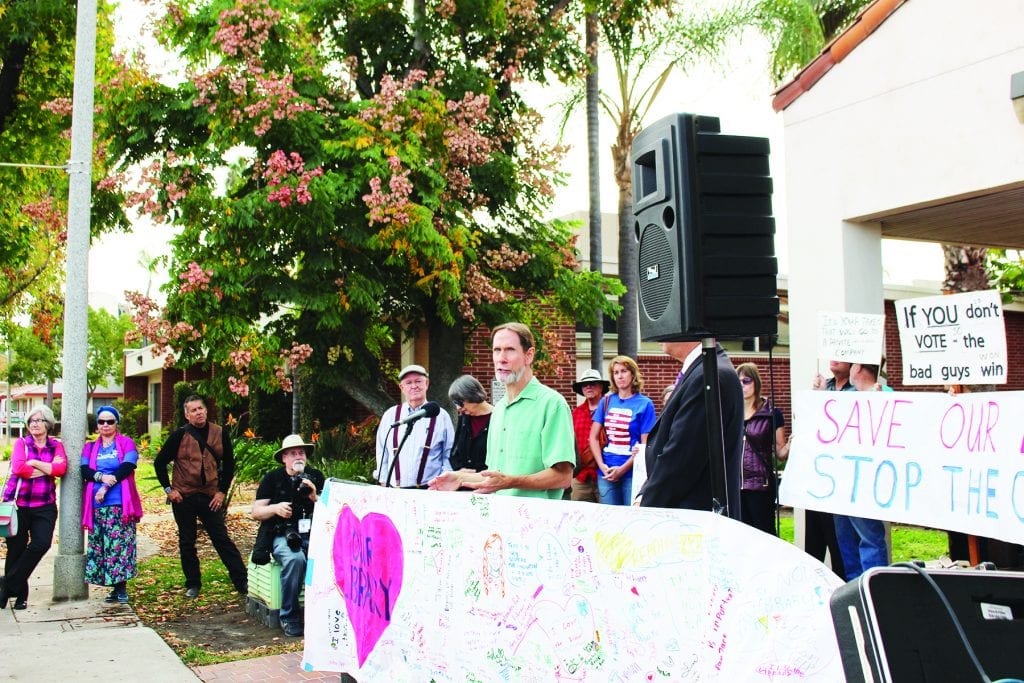 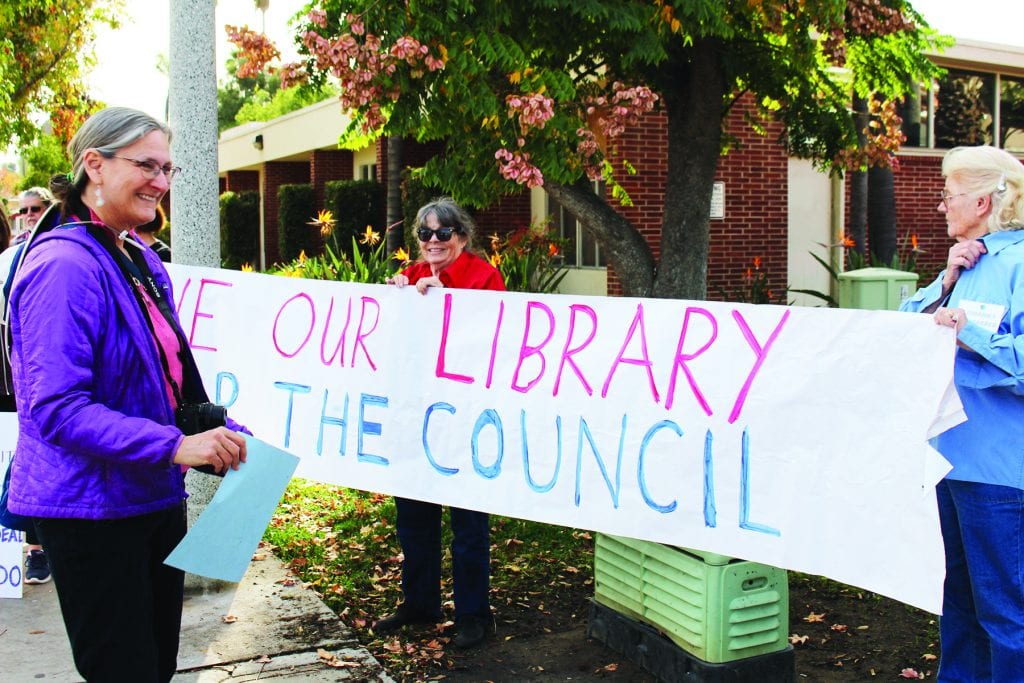 Laura Hunter, one of the leaders of the Save Our Library Coalition, admiring one of the signs supporting the lawsuit.