Artist Stephen Fishwick: It’s taken him 40 years to be this fast! 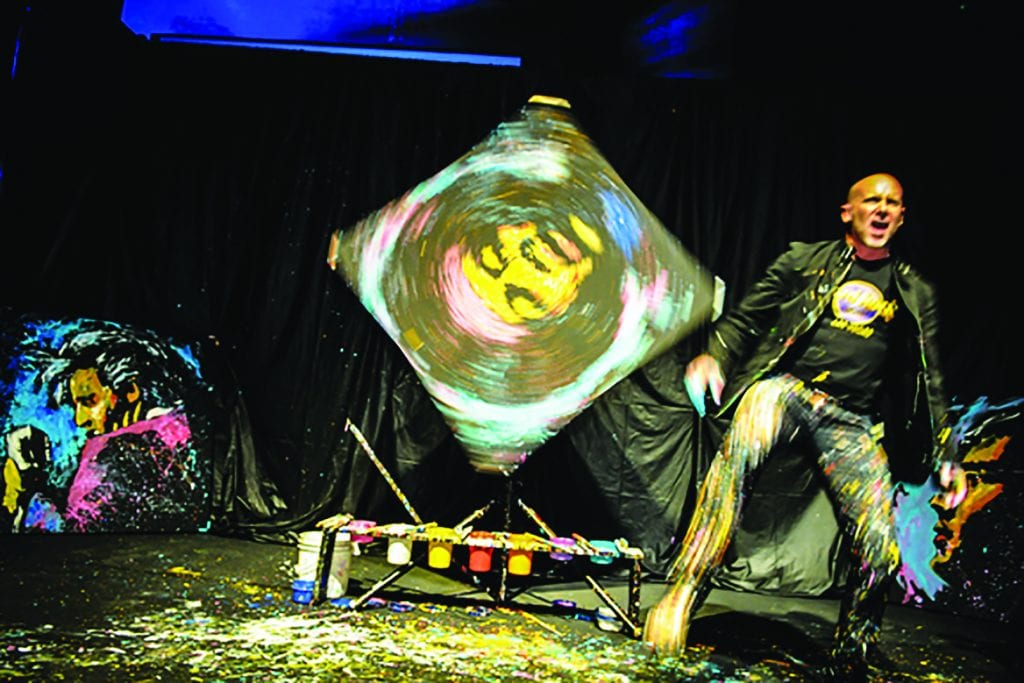 Performance art—Stephen Fishwick says it took him 40 years to learn how paint this fast. He always paints to appropriate music. In this case that means Jimi Hendrix.

Ask an artist to explain how he is able do an amazing painting and he might say, “talent and hard work.”  Stephen Fishwick—who produces paintings that can be auctioned off for several thousand dollars—during 15 minutes of high energy performance art— has a different view. “People ask me all the time how do you paint so fast and I say, ‘All it takes is forty years!’ ”

I caught up with Fishwick in his studio, which is set on the second floor over the Lexus car dealership. It’s a studio that is instantly welcoming, that says, “come in and look around. We’re friendly.” No paintings in expensive frames. No snooty art snobs behind the counter. Nothing stern about it.

That’s forty years of hard work AND practice, by the way.  The talent part Fishwick isn’t so fast to claim, although obviously that’s a major factor. “When people ask me about myself—it’s work. Not god given talent. It’s forty years of practice year after year.”

But he HAS been painting since he was 7 years old. “I had a mom who was an artist. As soon as she saw I was interested I had all the art supplies I needed,” he recalls. 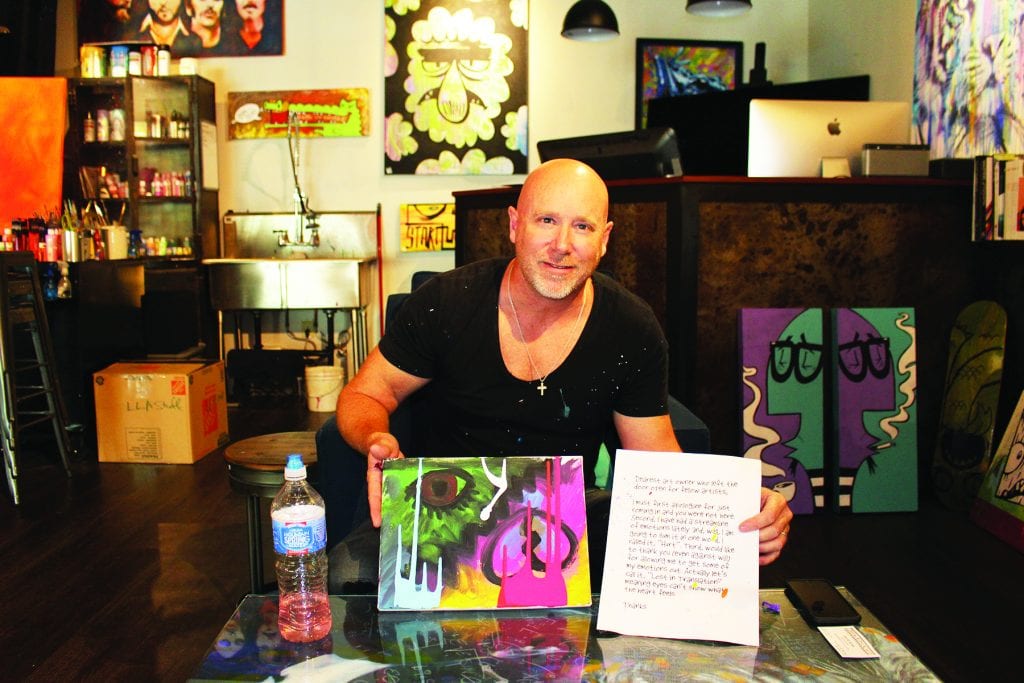 Fishwick with a painting that was done in his studio at night by someone who left a note thanking him. The note says “Dearest art owner who left the door open for fellow artists. I must first apologize for just coming and you were not here. Second, I have had a streamline of emotions lately and well I am going to sum it in one word, I called it, “hurt.” Third, would like to thank you (even against will) for allowing me to get some of my emotions out. Actually, lets’ call it, ‘lost in translation.’ Meaning eyes can’t show what the heart feels. Thanks.”

Fishwick has had his gallery on the second floor of the Lexus dealership for three and a half years. He is known for his high energy painting exhibitions where, right before your eyes, he produces spectacular paintings in just a few minutes. He calls these entertaining spectacles “Art Attack, a Full on Creative Assault” and they are a wonder.

Stephen Fishwick was born just outside of Cleveland, Ohio in the small farming town of Jefferson. His family owned a small farm surrounded by big commercial farms. He and his three brothers all went to work at neighboring farms when they were about 12 years old.

Drawing and painting animals caused him to develop a deep feeling for animals, so that one of his first major fundraisers—in 2004— was to benefit endangered species. Over the past several years Fishwick has raised more than $1 million for various causes.

Fishwick’s first works were mostly drawings of farm animals, and of Spiderman, (young Stephen was a big fan.) He got a summer job as a quick sketch artist and quickly became a caricature artist at the Cedar Point Park in Sandusky, Ohio.

From high school, he entered the Art Institute of Pittsburg only to drop out in less than a year—just in time to avoid getting an art degree that would have been almost immediately obsolete in the face of the computerization of the commercial art world. 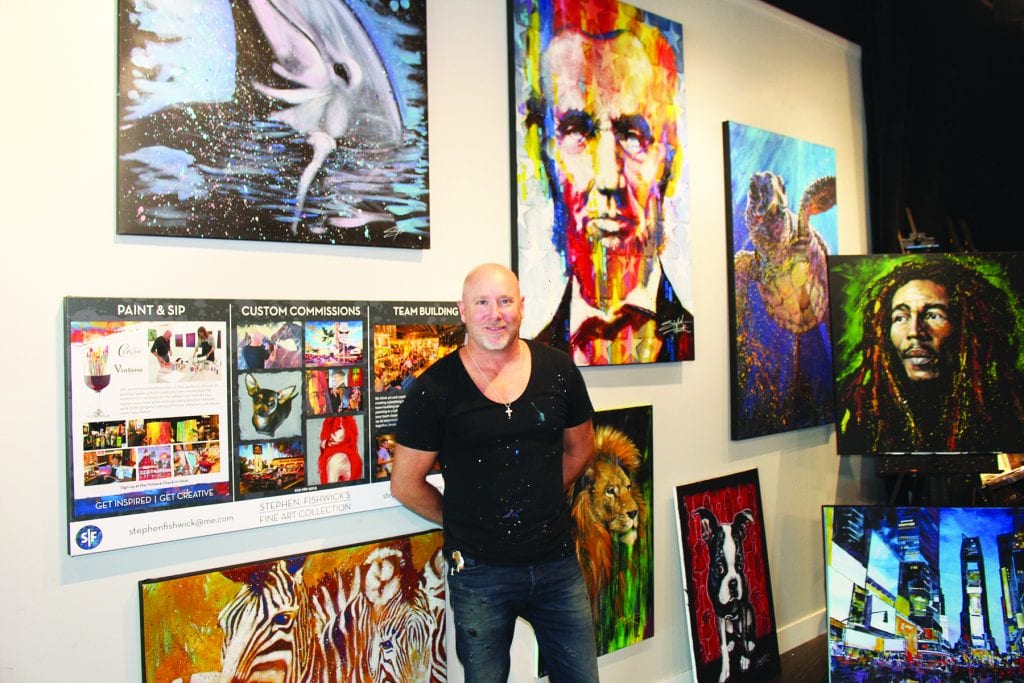 Fishwick’s studio is the opposite of a foreboding gallery where paintings are locked away from the people who view them. Visitors are welcome to walk in, look, and even pick up a brush and sit down at an empty canvas and start painting.

“I had no interest in commercial art or designing ads. I was hired as an artist,” he recalls. A year after leaving high school he was a professional artist for Kaman’s Art Shoppes Inc., which supplies artists to theme parks all over the U.S. He was sent to work at parks such as Sea World of Orlando or Sea World San Antonio and in 1994, to San Diego Sea World. Eventually, he managed large teams of artists, something he did for 21 years.

“In a sense, I feel like they gave me a Ph.D. in business,” he says. The problem eventually came to be that he was more manager than artist. “It had nothing to do with art,” he recalls. So, he left to be a fulltime artist in 2010.

He had been headed in that direction for some time. In 2007 the San Diego Zoo approached him to do a show to highlight the plight of endangered species. During two summers of shows he did as many as 50 paintings in a few weeks to benefit animals.

Although he likes to do bravura exhibitions of rapidly executed paintings in front of audiences, including positioning the canvass upside down so audiences have to screw their heads around to make out what is taking shape—it typically takes him from 45 minutes up to a couple of weeks to do a painting.

When he does a performance, he practices the painting several times. “It’s similar to a musician playing a song. They are going to practice it and play it until it’s right. If someone gave me a new image I would practice it several times,” he says. 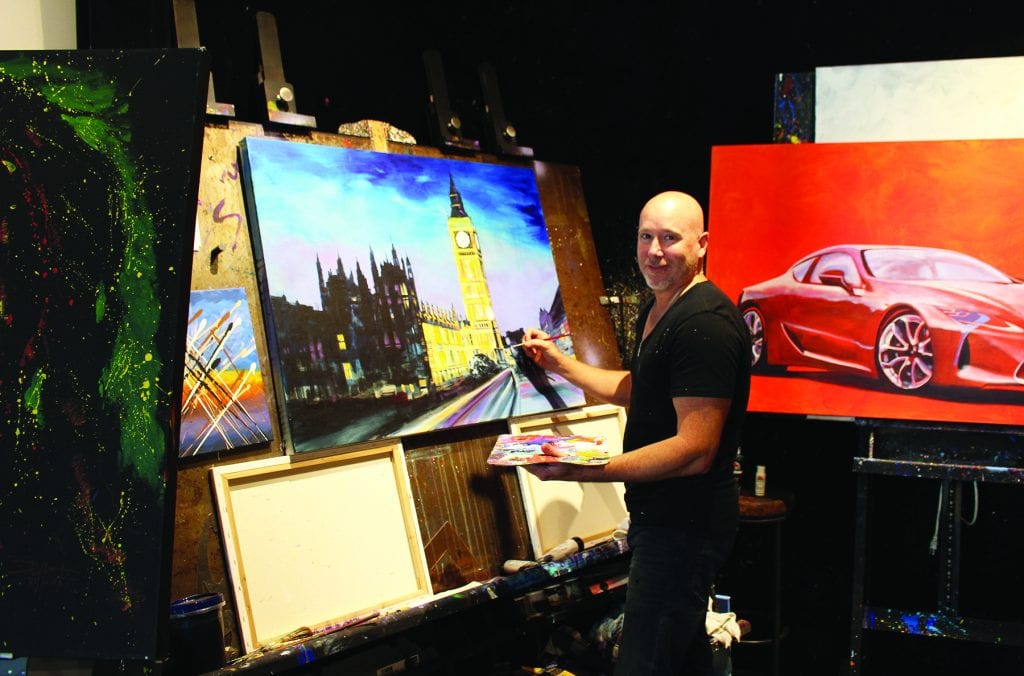 The artist at work.

He works with estates, like the estate of Elvis Presley, Jimi Hendrix, Bob Marley, Kiss and AC:DC to produce works of those icons. He is also a fine artist for Disney, producing gallery-quality paintings for Disney stores and galleries.

“What is your white whale?” I asked him.

Taken a little aback by the question, Fishwick thought for a long moment. Finally: “Breaking into the fine art world as a name like Thomas Kincade. Being in that upper echelon. Even though fine art is not what I make the most money doing, it is what I put the most effort into.”

Fishwick has never liked commercial art. He also eschews the computer, except for a little dabbling now and then. His canvas is— quite literally— the canvas, not the computer monitor, and his medium is oils and acrylics. “I prefer touching the canvas.”

Although he wants to be known for his fine art, he dislikes the world of art and the false narratives that artists and publicists spin that include terms such as “world famous” and “world renowned” that are used to set prices.

“We know who the Impressionists are for an arbitrary reason. A guy who wrote a book about art took all of the artists like Monet, Cezanne, Matisse and Renoir and classified them as that. They didn’t call themselves Impressionists,” he says.

He seems to consider himself to be a work in progress. “I constantly surround myself with artists who are better than me. I seek the company of people who make me really grow,” he says.

Although his work has been compared to the great sports artist Leroy Neiman, Fishwick says, “I don’t see it. Style wise, not so much. ” He admits to drawing inspiration from Norman Rockwell, Salvador Dali and John Singer Sargent, but strives for a style all his own. Almost everything he does is of human or animal figures.

Fishwick is proud of the $1 million plus he has raised over the years for various causes. He’s always on the lookout for worthy organizations.

One of the most remarkable things about Fishwick’s studio is that he keeps it open all the time, even in the evening. Anyone is welcome to wander in and pick up a brush and start work on one of the blank canvases he keeps available all the time. It’s totally free. It’s also rewarding for him. “All the time they produce talented work,” he says.

“It helps this building to have a unique experience for people to come in and do while they get their cars worked on.”

He set up his studio that way in part because he doesn’t like how stern so many art galleries can be. He wants his studio to be welcoming.

Life for Stephen Fishwick is often the life of a globe trotter. On one recent trip he did performance art in Las Vegas, Beirut and Japan, all in one 25-day trip. He visits the Middle East and Europe frequently.

Unlike some artists, Fishwick doesn’t let politics infect his work. “I’m socially very conscious of what’s going on in the world, but I want to be positive and not negative,” he says.

If he has any message for other artists it is this: “The word talent is a crutch for people not to try because they don’t think they have it.”

You can find more of Stephen Fishwick’s work by visiting his website; stephenfishwick.com, or come on down to the Lexus dealership and walk into his studio. You might even want to pick up a brush while you’re there.

2 responses to “Artist Stephen Fishwick: It’s taken him 40 years to be this fast!”