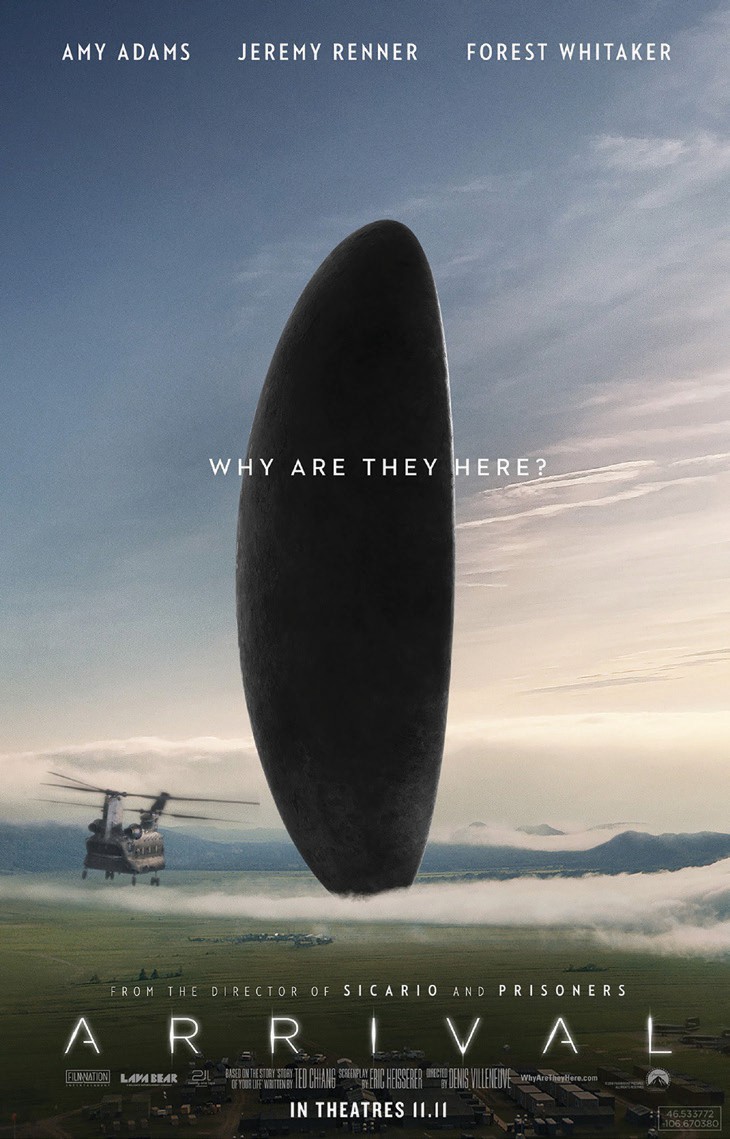 “Arrival” opened three weeks ago to some of the best reviews of the year and Best Actress Oscar talk for Amy Adams. The problem was that the film was weirdly limited in its release, playing on only 2,300 screens in the country when most new wide releases play on over 3,000. I didn’t see it then because it opened with less money than the second weekend of “Trolls.” I didn’t see it the last two weeks because it got creamed by the opening weekends of “Moana” and “Fantastic Beasts and Where to Find Them.” And now that I have seen it (as it has expanded to 2,900 screens), I have to say that I don’t see why it’s getting so much praise.

The film sees Earth visited by aliens that don’t behave like typical movie aliens. For starters, they never leave their ships because they can’t handle the planet’s air and gravity. Humans have to come aboard their ships once every 18 hours, go through a nauseating gravitational shift, use a cruel old-fashioned method of determining if the air is breathable, and talk to the aliens from behind glass. The aliens also don’t touch down at national landmarks, with the one American vessel of their 12-vessel fleet hovering a few feet above rural Montana. Perhaps most importantly, they haven’t yet invented one of those universal translator devices that lets us hear them in English. We’re going to have trouble communicating with them, and it’s going to lead to some misunderstandings.

Dr. Louise Banks (Adams) is called in to help with that last part. She’s a linguistics professor enlisted by the military to interact with the aliens and try to understand their language, which takes the form of entire sentences written as circles with no definite beginning or end. She and her partner Dr. Donnelly (Jeremy Renner) spend months teaching and learning basic concepts like “Hello” and “Human.” Experts working with aliens who settled over China believe that the aliens told them to use a weapon, which might mean that they plan to use a weapon on humans or that they want humans to use weapons on each other. Louise thinks that the more malicious interpretations are too much of a stretch given the aliens’ apparent peacefulness. She thinks that by “weapon,” the aliens mean “tool” or maybe “gift.”

The film has been praised for its complexity, how it doesn’t give viewers all the answers, forcing them to think for themselves. I’m pretty sure that this doesn’t refer to the leap in logic of how the Chinese apparently taught the aliens the concept of “weapon” without also teaching them “tool” so that they’d know the difference. More likely it refers to a subplot about Louise having visions of raising a daughter who dies of an illness. Did this happen in the past? The future? A possible future? A separate timeline? Does it hold the key to the aliens’ purpose now? Those are the deep questions posed by the movie, which challenges the characters’ (and the audience’s) conception of time.

I don’t mind that chunks of “Arrival” are missing or non-linear. I do mind that the film is so in love with a twist at the end that the characters are practically winking to each other over how clever it is. But that’s not my biggest problem with the movie, my biggest problem is that it’s slow. I know I’m supposed to admire Louise for being patient when the rest of the world is ready to lose its head, but this movie desperately needs to put a spring in its step. It’s not bad by any stretch; it does play with some interesting concepts, it is successful with its dry humor, and the performances and special effects are all respectable

(love those spaceships shaped like Go stones), though perhaps not as award-worthy as I was led to believe. Maybe my expectations were unrealistic after three weeks of constant critical commendation.

“Arrival” is rated PG-13 for brief strong language, Its running time is 116 minutes.