Arrests made in Kennedy death 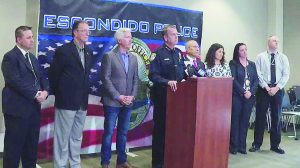 Thursday the Escondido Police Department held a press conference to announce that two suspects in the death of Escondido resident Catherine Kennedy had been arrested the day before.

The suspects are a 16-year old minor and a 24-year old man, who is suspected of being the shooter who fired the fatal bullet that struck Mrs. Kennedy in the head as she was driving home from a Tuesday night Bible study on East Grand Avenue.

During the press conference, Chief Craig Carter clarified a misconception, which was that Mrs. Kennedy had been shot in cross fire. Both males were from the same gang and are thought to have been firing towards an apartment complex.

Carter emphasized that the identification of the suspects was made through the cooperation of law enforcement agencies from the region and throughout the state.

Speaking of Mrs. Kennedy, Chief Carter said, “This is not something she signed up for and that has been a driving force of everyone involved in this investigation—to bring justice to Catherine Kennedy.”

He said that he met with her husband, Kevin, and daughter, and “They were very appreciative of the hard work” that went into apprehending the suspects. He said they asked to be given “peace” by the media during services that were held on Friday.

He praised the community for coming forward to give the police information in the case. “They were individuals from the apartment complex and all walks of life.” He said it is flat wrong that residents of the community were afraid to come forward because of fears of being turned over to immigration authorities. “That is not the case . . .This community is not afraid to come forward and tell us what we need to know in cases like this,” he said.

He said he is hopeful that community members will continue to come forward with information in the case. He noted that they were holding back some information from the public during the on-going investigation. He wouldn’t, for instance, confirm whether the suspects had been on the run when they were arrested.

He confirmed that a weapon believed to be the one used in the shooting was recovered from outside of San Diego County.

He said, “almost every investigative tool was used,” in finding the suspects. “Some people came forward with info from months ago that they thought might be relevant.”

Mrs. Kennedy was murdered on March 7, 9:09 p.m. while driving her car through the middle of a violent gang confrontation.

On March 15, the EPD made two arrests in this gang-related crime, a 24-year-old male adult believed to be the shooter, and a 16-year-old male juvenile.  Both have been charged with murder and other charges are forth-coming from the District Attorney’s Office.  The adult was arraigned Friday afternoon at the Vista Courthouse, Department 14, and the juvenile was arraigned on Monday, at the Juvenile Courthouse.

After meeting with Chief Carter, Kevin Kennedy issued this statement: “We would like to commend the Escondido Police Department on these arrests and ask that you respect our privacy as we continue through the grieving process in light of this new information,” said Kevin Kennedy.