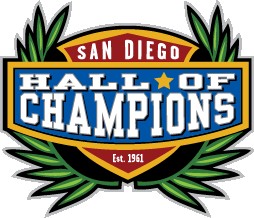 High school seniors in certain sports were allowed to sign National Collegiate Athletic Asso­ciation letters of intent on Novem­ber 11. Incoming military academy freshmen do not sign letters of in­tent, nor do athletes entering Ivy League, NCAA Division III, or oth­er non-scholarship programs, but the Hall of Champions utilizes the simulated signing to recognize the transition of those student-athletes into college sports.

Seniors who do not sign a letter of intent during the early signing period will be able to sign during the period beginning February 3, which is also the earliest day foot­ball, boys water polo, and soccer players may sign NCAA letters of intent, and the Hall of Champions will have a ceremony that day.

The November 11 signing cer­emony included four San Marcos High School seniors. Chloe Ever­ing will play volleyball at the Uni­versity of Albany. Lindsay Lad­man will swim at the University of Pennsylvania. Johnny McWilliams will continue his basketball career at Fresno State. Ryli Quinn will be on the University of San Diego la­crosse team.

Calvin Christian senior Sara Wa­genveld will be a two-sport athlete at Azusa Pacific University, participating in volleyball during the fall and track and field during the spring.

Mission Hills senior Madison Stanich is headed to Durango, Col­orado, where she will play softball for Fort Lewis College.