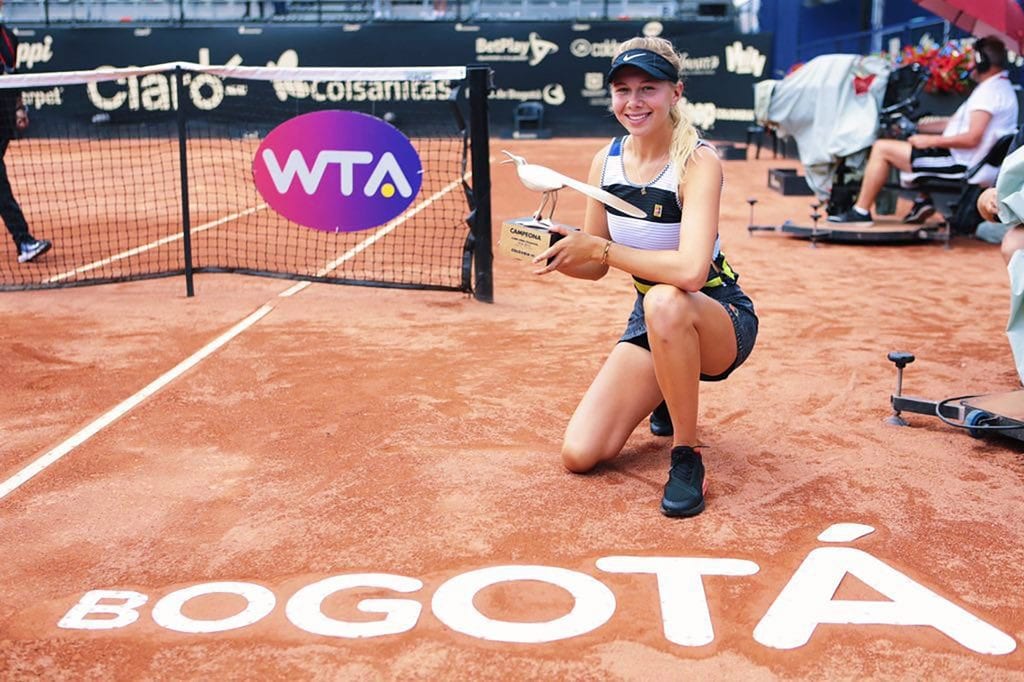 There are plenty of good reasons to spend some of your entertainment dollars on the San Diego Aviators, the local entry in the World Team Tennis circuit.

Not only is the play compelling and spirited, but the atmosphere down at the Omni La Costa Resort and Spa, where the Aviators host their home matches, is caffeinated and lively. In many respects, what transpires on the Show Court and in the seats that surround it could qualify as a real happening. Moreover, there’s a perceptible energy that’s generated by the engaged players and an animated crowd that gets totally juiced whenever breathtaking shotmaking is produced.

So yes, there are justifications galore to make every effort to catch the Aviators in action, even if you have to travel some distance or go out of your way to make that a reality.

But despite all the pluses that the Aviators have to offer, I must candidly admit that the primary motivation for this reporter’s presence at last Friday night’s match with the Orange County Breakers was quite simple. I wanted to see a wunderkind in the flesh – someone who is being touted as a can’t-miss star and a player seemingly destined to be a Top 5 talent in the not-so-distant future.

The young lady in question answers to the name of Amanda Anisimova, born in New Jersey but someone who’s spent her formative years nurturing her game in the tennis mecca of Florida. At the age of 17 and armed with a potent forehand and a crisp two-handed backhand, she has already accomplished some mighty heady stuff.

At one time as a junior, she was ranked No. 2 in the world, won the 2017 Junior U.S. Open and was a girls’ finalist at the French Open.

Her foray into the pro ranks has been just as noteworthy, replete with a number of headlines. She garnered a title in Sacramento and advanced to three other ITF Finals in 2017. Last year saw her  beat the acclaimed and highly-ranked Petra Kvitova in the third round at Indian Wells, earn a runner-up finish at the WTA’s Japan Women’s Open and crack the Top 100 list.

And the change in the calendar to 2019 did nothing to impede her gathering momentum. Early this year, Amanda did some serious damage Down Under at the Australian Open where she whipped No. 11 Aryna Sabalenka en route to a quarterfinal berth. Not long after, Anisimova captured her first WTA title with a win at the Copa Colsanitas in Columbia.

Things got even more intoxicating for the young American at the French Open when she rode her precision groundstrokes all the way to the semifinals, thanks in large part to a memorable takedown of the world No. 3 and defending champ Simona Halep. That victory took on even more significance when Halep went on to win the just completed Wimbledon Championships in mid-July.

Even though she won’t turn 18 until the end of this month, Anisimova has already earned well over a million dollars in prize money, racked up 73 match wins on the WTA circuit and gives every appearance of being a solid bet to become the first teenager since Maria Sharapova to capture a Grand Slam event.

On the court, the fresh-faced and blond-haired Anisimova is impossible to miss. At 5’ 11”, with long legs and a lean physique, she looks quite equipped to handle the physical demands of her sport. Just as importantly, she possesses a poised and focused demeanor that belies her age and suggests she won’t be easily rattled. Yes, she can emote but even that is done in a rather controlled manner. At least on the surface, Anisimova presents a maturity that could be unnerving to those who must cross rackets with her.

Anisimova came into Friday’s play with WTT experience having previously toiled for the Philadelphia Freedom—so the unique format of the event was no surprise to her. In WTT play, five sets are contested, those being men’s and women’s singles and doubles as well as mixed doubles. Among the more novel concepts of the league are that sets are won with five games and let serves are played.

Though her professional experience in doubles is rather limited, Anisimova nonetheless paired up with teammate Arina Rodionova to take on the OC duo of Nicole Gibbs and Andreja Klepac. Yes, there were moments of sublime artistry like when Amanda angled an ace, loaded up on a crosscourt winner, ripped a forehand down the line and dropped a touch lob right into the corner, but there was also a missed volley and some unforced errors. Meanwhile, Gibbs and Klepac beautifully meshed their games and were, for the most part, having their way while rolling to a 5-2 win.

But in the women’s singles that concluded the evening’s play, Anisimova clearly found her rhythm and showed off much of her arsenal while downing the gritty and versatile Gibbs.

Despite Anisimova’s loss in doubles, it appeared that having that opportunity to unlimber and get loose definitely helped in her singles matchup. It wasn’t long into the faceoff with Gibbs that Amanda’s penetrating strokes began paying big dividends. Whether she was authoring a whacked forehand winner down the line or smashing a hard backhand that was exquisitely placed, Anisimova was unquestionably bringing the heat.

Bending her knees and sometimes getting noticeably low, Anisimova was equally adept at producing punishing shots off both wings. The velocity, consistency and accuracy of her groundstrokes was impressive and it soon became apparent that trying to outhit her from the baseline was basically a losing proposition.

Anisimova also displayed a nice swing volley, a willingness to employ a drop shot and an effective serve that featured both location and kick. Her return of service was another definite plus.

No, it hadn’t been an errorless performance. There had been a few glitches that need to be ironed out but on balance, her effort was generally first-rate and worthy of the hype that had preceded her. And what made Anisimova’s 5-3 victory all the more satisfying was that in Gibbs, she had defeated a gutsy opponent blessed with athleticism, an admirable variety of shots and a perceptible élan.

Moving forward, Anisimova figures to continue generating plenty of buzz as her game becomes more nuanced and refined. In addition, if she can add a bit more firepower to her serve, then Anisimova will become even more of a frightening foe to her future opponents.

Thus, based on her current No. 23 world ranking and what she showed at La Costa, there can be little doubt that Amanda Anisimova’s rise to stardom seems all but assured.