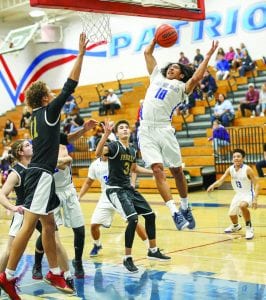 Acrobatic Damien Miller climbs high to rip down a rebound against the Lancers. Miller enjoyed another standout all-around game that included 18 points on the offensive end.

The Orange Glen boys’ basketball team is surging and giving every appearance that it is hitting its stride at just the right time of the season.

On January 17, the Patriots captured their third straight game and made it six out of the past eight with a convincing 77-62 victory over visiting Francis Parker. With this momentum-sustaining win, the Pats upped their seasonal record to a noteworthy 13-6 while improving their mark in the Coastal League to 2-2. For the vanquished Lancers, their ledger fell to 6-5 for the season and 1-3 in the CL.

Racing out to an early 16-4 lead, the Pats never looked back and the closest the Lancers ever got from that point on was a distant nine points.

Though OG received solid contributions for others, this triumph was primarily a two-man collaboration. Demonstrating an ability to score from both in deep and from distance, savvy forward Angel Nieves topped the stat sheet with an impressive 27 points.

Meanwhile, all-around guard Damien Miller was his usual show-stopping self, doing virtually everything a player can do on a basketball court. Miller’s 18 points barely hinted at the wide-ranging impact he had on the eventual outcome.

Right from the opening tap, the Patriots went up-tempo, used a hounding man-to-man defense and found shots from in tight and beyond the arc to forge a 19-10 first-quarter lead. The dynamic Miller scored on a left-handed layup, a sweet turnaround jumper in the lane and then a 3-point bomb from straightaway.

Angel N. made his mark by tallying the game’s first five points which came on a soft-touch flip from down low and a left-corner trey that showcased his funky but nonetheless effective spin on the ball. Another Nieves, a freshman answering to the name of Adam, was also a key contributor during this stretch with a pair of determined follow-up hoops.

The second period saw more of OG controlling the flow of play and continuing its superiority at both ends of the court. The Pats were able to expand on their margin and fashioned a 39-24 edge at the break. Again it was Miller and Angel inflicting a lion’s share of the damage with each registering seven points.

While Miller was doing his thing by burying a 3-pointer, a mid-range jumper and a nifty follow-up basket right at the buzzer, it was the elder Nieves who kept pace with his teammate by scoring on a nice lean-in, a howitzer from downtown and an off-handed layup.

Hardly resting on their laurels, the Pats continued to put the pedal to metal during a rousing third-quarter offensive explosion that saw them at one time own a 25-point advantage. Nieves remained red-hot as he added nine more points to his total, the most remarkable of which coming on back-to-back trifectas that hit nothing by net from the left forecourt. 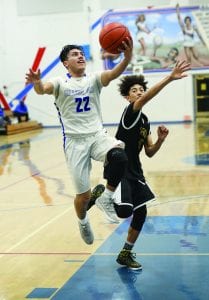 Entering the final quarter up by 22 points, OG had matters well in hand and everything from there on seemed rather anticlimactic because Nieves and Miller made sure the Lancers were kept comfortably at bay by combining for a final five baskets down the stretch. In some respects, the final count of 77-62 didn’t quite reflect the dominance that OG had exhibited during lengthy stretches of the contest.

Though it had hardly been their night with many of the Lancers having been hurried into turnovers, rushed shots and defensive breakdowns, there was one FP player who truly stood out. Freshman guard Daryl Sledge Jr. proved to be a revelation with his athleticism and aggression on his way to a productive 17-point outing.

The reasons that the Patriots are winning at a .684 clip are many and varied. But at the top of the list is their remarkable relentlessness.

Coach Chris Featherly has done a terrific job of getting his players to compete with effort and passion at all times. There is absolutely no let-up in the Pats. Whether they’re harassing an opponent with a hawking defense, constantly moving and cutting on offense or quickly jumping out in transition, OG appears to be comprised of players who were cut from the same cloth as the Energizer Bunny. It is this commitment to supreme hustle that usually allows the Patriots to negate what might be perceived as an inherent height disadvantage since only three OG players measure out at six-foot-one or taller.

Moreover, by incorporating such an energetic style, bodies need to be kept fresh and Featherly ensures that’s the case by having developed a rotation that goes at least eight deep and sometimes beyond that.

Though Miller and Angel Nieves were clearly the headliners against the Lancers, other Pats have been key factors throughout the course of the season. Shooting forward Caedon Palmer has plenty of range, can operate inside if needed and is averaging in double figures (10.7 PPG). Andres Tovar is a reliable guard who knows how to produce points (13.5 PPG) and play steady. And Nieves the younger, who finished with 10 points versus Parker, is a smooth operator capable of elevating, scoring and making his presence felt.

As for Angel (9.3 PPG)), the scoring outburst that bedeviled FP certainly demonstrated the potential that this junior possesses. Not only can he step back and confidently drill treys, but this Nieves knows how to expertly utilize his sturdy body to position himself in low and get high-percentage attempts. Equipped with a nice assortment of moves once in the post, Angel can be a handful to stop once he’s in tight

And finally, there’s the one-of-kind Miller – the very personification of versatility. Name it and Miller—he of the long flowing hair—can do it at an extremely high level. Where to start? A deft ball handler, Miller’s court vision is expansive and keen. Constantly seeking to get teammates involved, he is adept at setting them up with creative and unselfish passes (9.6 APG). A gifted scorer (16.6 PPG) with considerable range, he can stroke from downtown, hit on pull-up jumpers or attack the hoop and finish with a flourish at the rim. In fact, there are few if any guards of his height (5’9”) in the entirety of San Diego County who can sky and soar like Damien. His forays to the hoop are not only exciting but often leave onlookers struck with amazement. 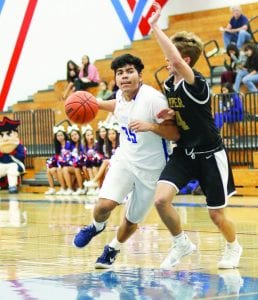 OG junior forward Angel Nieves powers his way past FP’s Hunter Penrose on his way to the basket. Nieves was an offensive heavyweight for the Pats, scoring a team-high 27 points.

In addition, Miller is a tenacious defender, a splendid rebounder (8.8 RPG) and an accomplished thief given his knack for coming up with steals (3.4 SPG). Miller’s multi-dimensional skills are perhaps best reflected by the fact that he leads the Pats in every major statistical category.

Simply stated, Miller is OG’s igniter and catalyst, the signature player who sets the tone and gets the Pats into their rhythm and flow. He is the rock upon whom so much relies.

On January 24, the Patriots figure to have a great shot at extending their current roll when they play host to an unpredictable Santa Fe Christian team that has won just two of five Coastal League matchups while carrying an overall 10-9 mark.

If Miller, Nieves and company play anywhere near the level that they demonstrated against overmatched Francis Parker, SFC very well might find the night an awfully long one as did the Lancers.