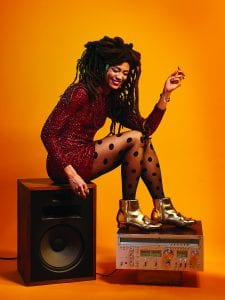 Valerie June has developed her own “organic moonshine root music.”

Valerie June has been making waves in the folk and blues scenes since 2008, gaining steam and popularity ever since. One of Bob Dylan’s favorite artists, June has a knack for soulful melodies and energetic vocals that create an unforgettable live experience.

June hits the California Center for the Arts in support of her critically acclaimed record An Order of Time. “She puts esoteric wisdom to captivating use on her new album.” – NPR praised.

Since first recording at the age of 19, June has been knocking down boundaries with her self-described “organic moonshine roots music.” She’s been featured on MTV, Austin City Limits, and was recently nominated for Best New Artist at the Blues Music Awards.

His solo style mixes folk-rock, alternative Americana sounds, and classic cowboy ballads. Having started as a busker on the streets of New Orleans, Landry honed his sound from sidewalks of Mardi Gras and the back roads of Louisiana.