was 24-year resident of Escondido 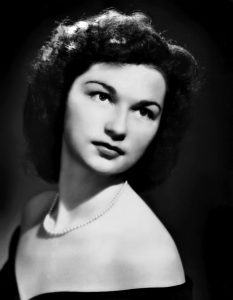 Agatha Ann Giacalone, a longtime resident of Escondido, died April 20, 2017, surrounded by nearly every member of her family. She was 83.

Tears were shed, memories were shared, love was expressed, and much laughter was had as the family gathered to celebrate her life with her in her final day. She passed without pain or suffering, loved to the end.

Agatha Ann Giacalone (Farnsworth) was born on February 26, 1933 to Hugh & Araminta Farnsworth in Henrieville, Utah. The youngest of five children, she was loved by her family and, in turn, learned the importance of making others feel loved and special. Her family moved to Kearny Mesa in 1941 where she was raised. Attending Kearny Mesa High School, she was a song leader, model, and the Fairest of the Fair.

A 14-year-old Ann was shopping at a department store with her mom and she spotted a tall, dark, and handsome stranger. She turned to her mom and  declared, “I’m going to marry him.” Three years later, Ann and Joe Giacalone went on their first date. Walking along the beach, she challenged him to a foot race. Thinking this little brunette would be no match for a state-champion wrestler and World War II veteran, Joe laughed and accepted. He was shocked when Ann not only passed him but resoundingly beat him in the race no matter how hard he ran. From that moment on, she was his “Butch.” From that moment on, her entire world and all her love would center on him. Ann and Joe were married in Yuma, Arizona on December 1, 1951.

After making their home in San Diego they welcomed their first child: daughter,  Valarie. The greatest joy and love of Ann’s life were her children, who continued to come after they moved to Chula Vista: JoAnn, Sharon, Joseph, Cara, and Matthew. Mrs. Giacalone’s time, love, and energy were devoted to raising her children.

She served in numerous church callings, PTAs, and neighborhood organizations over the 25 years they spent in that city. Her house was the daily destination for all the neighborhood kids to get fresh-baked cookies and treats.

She threw annual family beach (and later pool) parties on Memorial Day, Fourth of July, Labor Day and Christmas Eve with Joe’s extended family. She became an example of Christlike service and love to a generation of adults and kids who attended these parties. She threw Thanksgiving dinners every year for her own extended family.

With her husband and children, they volunteered and helped those less-fortunate – spending nearly every Christmas finding families in need and delivering food, money, and presents.

The couple and their remaining younger kids moved to Escondido, in 1979 and became a pillar of the community for the next 24 years. She worked in hospice, helping people feel love in their final weeks.

While in Escondido, her husband of 31 years joined the LDS church and went to the Los Angeles LDS temple to be sealed together for time and all eternity. She welcomed in a new group of children to be loved and cared for as her children got married:  Michael Denning, Bruce Sevy, Bruce Dunn, Allen Puckett, Heather Van Orden and Kari Owsley all called her “mom” and felt what it meant to be part of her legacy of love.

Her family continued to grow as the first of 24 grandchildren were born and her house became a safe haven for anyone who visited or lived there. She became the grandmother to an entire new generation of kids who found any excuse to visit to get cookies and hugs. If you were ever near Ann, you couldn’t escape without a big hug. “Do you think when you meet the Savior, he’s going to shake your hand? No, he’s going to hug you” she would say.

The couple moved to Heber City, Utah in 2003 where they settled for the rest of her life. As they always did, they quickly became the rock stars of the city – showering everyone they met with love and kindness.

She passed on April 20. Her legacy continues as her six children, five in-laws, 24 grandchildren, 12 great-grandchildren and thousands upon thousands of lives she had touched and changed for the better will live with her love and spread it to the people they meet.

In lieu of flowers, hug someone.