African Sanctus celebrates the people who live along the Nile 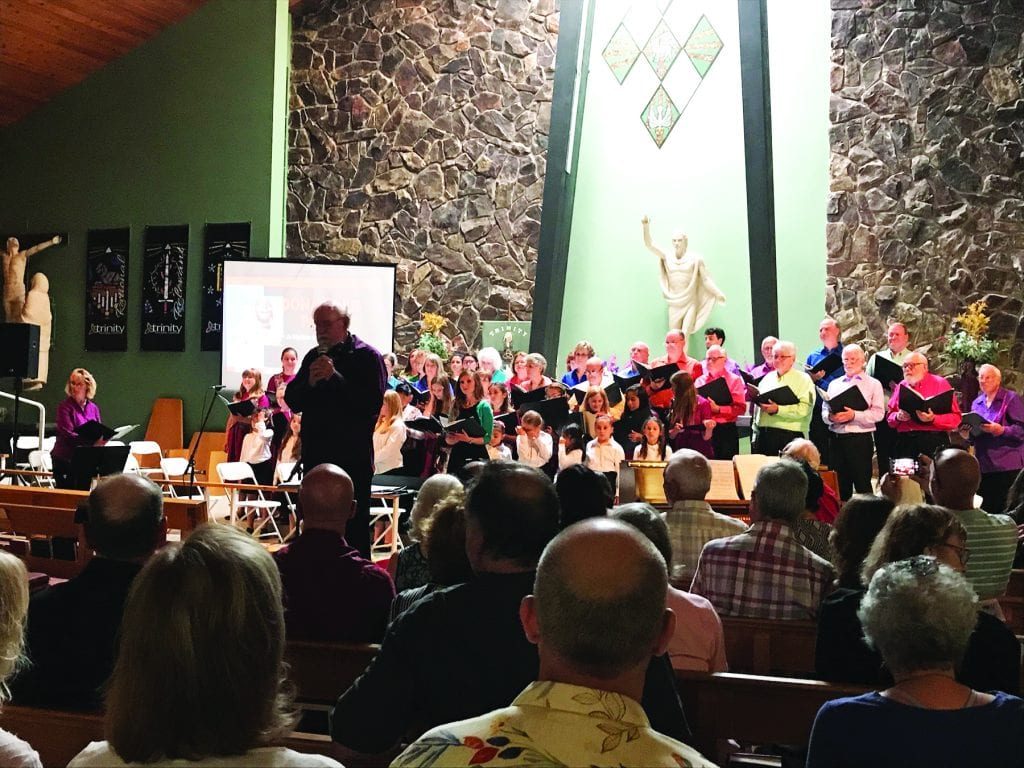 It’s amazing, when you think about it: A musical work that combines elements of a Muslim call to prayer and the most sacred of Christian music: the mass.

On Sunday the lovely and serene sanctuary of Escondido’s Trinity Episcopal Church was filled to capacity for the performance by the Center Chorale of the late David Fanshawe’s acclaimed African Sanctus. In this performance Fanshawe’s recordings and photographs projected onto a screen were joined with the choral voices of both children and adults for a dramatic visual and aural experience.

During the performance, the Center Children’s Chorus, Arioso and Brio Ensembles, joined Center Chorale to sing two movements of the piece accompanied by frogs, rain, thunder, drums, African Singers, and many other sounds of Africa, all recorded in 1969 during the composer’s trip up the Nile.

Fanshawe’s widow, Jane Fanshawe, traveled from the United Kingdom to provide a commentary for the concert.  She leaned over to tell the young performers, “Children, you are wonderful!” before launching into her exuberant telling of her late husband’s epic trip.

With artless charm Mrs. Fanshawe told the story of her husband, whom she described as “a musical explorer. Music and travel was his trademark.” In  1969, after attending the Royal College of Music, he left on a journey “to travel up the River Nile and compose a Latin Mass with those rhythms.”

In Cairo, at the beginning of the journey, he recorded in the Great Mosque of Muhammad Ali Pasha the call to prayer, which was then on Sunday joined with the choir in his composition to sing the Latin Kyrie, which is part of the traditional Mass.

“He recorded in a reel to reel, a great big box,” she said.  It was the beginning of a journey up the Nile that took him from Egypt to Sudan, and finally to Kenya and Lake Victoria, the source of the great river. If Fanshawe’s trip is plotted on a map of Africa it forms the shape of a cross, which was purposeful. “It was a cross-shaped pilgrimage,” said Mrs. Fanshawe. The purpose of the musical composition was to honor Africa in many musical styles and instruments, such as the drum, guitar and box piano.

From Cairo the musical journey continued to the Pyramid of Luxor, where an Egyptian wedding was celebrated with dancing and song.  In another section that took place in the Desert of the East Sudan, boys chanted an Islamic prayer. In a totally different location: the swamps of South Sudan were populated by refugees fleeing from the north, with all their possessions. They included a woman whose most prized possession is a box piano.

One of the sections, “Song of Night,” included sounds of children and frogs at the Equator.

Piercing thunderstorms were created using the church’s organ and supported by some of the most powerful voices of the choral work.

At one point a Masai woman sang to her favorite cow, asking it to give milk. As Mrs. Fanshawe explained, “The cow doesn’t consider the race of the person seeking milk. It gives milk to all races freely.”

Toward the end of the performance was the addition of a piece that Fanshawe composed later but intended it to be included in the African Sanctus. This addition, called Dona Nobis Pacem (“Grant us peace”) was written as a hymn to world peace. This section was one of the most moving and powerful—and uplifting, in the entire work.

One section included the mixing of choral music and a water dance recorded in Uganda. “Most of these men,” said Mrs. Fanshawe, “were brutally murdered by [Uganda dictator] Idi Amin six months later.

African Sanctus was an inspirational performance that shows the universality of music, and how different cultures can relate to each other, even in sacred music inspired by very different religions.

This performance was the final chorale work of the season by the Center Chorale, which will soon announce the compositions for its upcoming season. The performance was followed by a reception that included food and refreshments, provided by the Foundation.