Accomplished EC athlete does it all 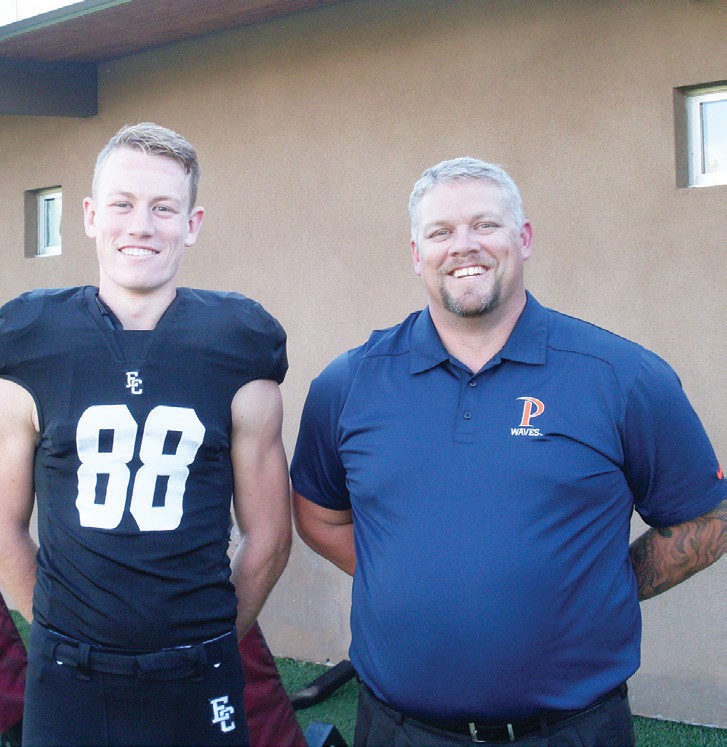 Coach Chris Bonta knows he’s fortunate to have such an versatile talent like Jake Zimmerman on his side.

If you’ve ever wondered whether it’s feasible to be good at everything, Escondido Charter High’s Jake Zimmerman might have your answer.

As the varsity football team’s kicker, starting tight end and defensive back, as well as skilled safety and wide receiver, Zimmerman, in head football coach Chris Bonta’s own words, “wears so many hats.” He also demonstrates leadership qualities and organizational skills through his role as team captain, proving that it may just be possible for one person to do it all.

In addition to his athleticism, Zimmerman maintains a high GPA and an admirable focus on his various tasks that is hard to find at any age. For this senior, his talents have found very few limits.

Moving confidently on the field and chatting comfortably with coaches and players, there is no question that Zimmerman is in his element. At 6’2” and 180 pounds, Zimmerman not only has the skills, he also looks the part. His athletic build provides for his strength and agility and has given him a clear-cut advantage on the field this season. On just three carries this season, Jake has already amassed an impressive 68 yards rushing, with a long of 49 yards. And in one memorable contest, he hauled in 3 catches for 166 yards and two touchdowns. However, the accomplished athlete reveals that for him, the most important aspect is not found in his physical prowess but in his ability to understand the game. Shrugging, he adds, “people who don’t pay much attention to the game focus more on the physical.” Zimmerman seems to have found the perfect balance. His mind and body match perfectly in both aptitude as well as motivation, a deadly combination for all who find themselves opposite him on the field.

As impressive as he is offensively, the player prefers “defense, for the fluidity,” appreciating that “it’s a lot more dynamic.” The young White Tiger’s partiality to being a defender has clearly showcased itself. So far this season, he has already made 16 solo tackles, including 2 tackles for a loss.

He also contributes significantly to special teams. He owns a perfect PAT record, a total of 552 yards punting, and 3 punts inside the 20-yard line. His record punt sits at an impressive 52 yards. When speaking about his role on special teams, Zimmerman reveals that the key to success is “getting out of your own head. If you’re focusing on one part too much you’ll over-think and mess up somewhere else.” When asked about his position as a kicker, he replies, beaming, “There’s nothing like it … it’s a different part of the game and I think it’s often under appreciated. It’s really a difficult part.”

Unfortunately, his talents have not had much of an impact on Charter’s overall record, with only one win in a total of seven games. While this would discourage most, Zimmerman remains confident not only in his own abilities but in those of his teammates as well. “We want to show we’re playoff ready,” he says. “We’ve got a solid running back and receiver so we’re definitely going to be competitive.” He admits, “The teams have been tough so far”, but confidently asserts, “we’re going to prove ourselves to Division V.”

Regardless of the next few games, Zimmerman’s future remains promising. Multiple colleges have already noticed his outstanding accomplishments. The student acknowledged, “I have been recruited by a few D2 and D3 schools, so I’m considering that.” However, Zimmerman is unwavering in his determination to excel in the classroom. For him, academics come first and foremost, but he adds, grinning, “I’m not ruling anything out!”

Aspiring to greatness on and off the field, Zimmerman has clearly been putting a lot of time into studying. Deciding between computer science and engineering, it’s apparent he has high expectations for his academic capabilities. While his personal college preferences are currently narrowed down to Harvey Mudd, Colorado School of Mines, and Rensselaer Polytechnic Institute, it’s undeniable that any college would be lucky to have such a multi-talented student in attendance.

Despite thriving in all areas of football and in the challenging properties of the classroom, Zimmerman still manages to remain focused on where he needs to improve. As a player, he believes “it’s a lot of self-motivation.” “I’d like to think I’m aggressive,” he says with a chuckle, but he desperately wants to advance his “offensive consistency, especially blocking.”

Zimmerman is clearly a perfectionist when it comes to bettering his own capabilities. “Defensively, I need to work on quicker reads and automatically knowing what to do,” he says. “Mindset” and “focus” are two words that come up quite often when talking with this young athlete, who knows how important it is to come to a game mentally prepared.

“I really appreciate the mental aspect”, he stresses, “It’s important to really understand the plays.” His academic proficiency has clearly given him an advantage and has made him a valuable asset to the team. Truly brilliant on and off the field, Zimmerman promises to never disappoint. Coach Bonta certainly agrees, emphasizing the student’s “absolute dedication to the sport”, and notes that “he puts in the extra hours that most don’t.” Zimmerman comes about as close as possible to being the quintessential student athlete. As Coach Bonta says, “he does everything.”