Abed takes off the gloves in supervisor’s race 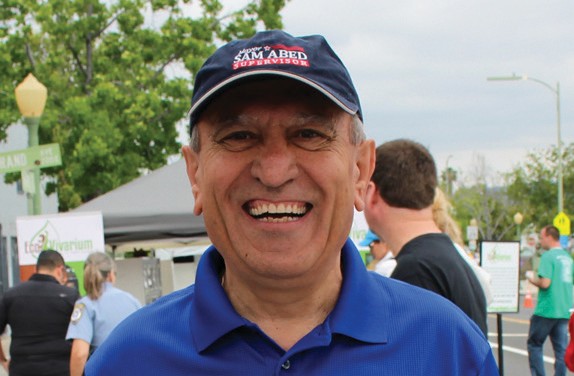 With just a couple of weeks until the June 7 primary and as absentee voters are starting to cast their ballots, Sam Abed, current mayor of Escondido, who is campaigning for Supervisor Dave Roberts’s job in the Third District, has come out swinging and with both gloves off (how’s that for a mixed metaphor?). His other opponent is Kristine Gaspar, mayor of Encinitas.

Reacting to some of Roberts’s statements touting his achievements in his first term, Abed accused the supervisor of spending most of his time on social media.

“He’s addicted to social media,” the mayor told the Times-Advocate this week when we caught up with him at the monthly meeting of the Escondido Republicans. “Twenty-four hours a day he’s Tweeting or putting up something on social media.” The mayor questions how the supervisor can be doing his job when he’s on social media so frequently.

Of course, it may be that Roberts has aides who Tweet for him. However, Abed offered a different explanation, viz, that Roberts is not spending enough time at his real job.

He noted that Roberts sits on the Regional Planning Committee of San Diego Association of Governments (SANDAG). “Between last May and this May he attended one meeting on the committee,” said Abed. If one looks at the attendance records for the committee, Abed’s name is right up there at the top for all of the meetings except one when he was on vacation.

It also annoys Abed that Roberts takes credit for the County’s AAA credit rating. “At the KOGO debate he said that the County achieved that rating after he became supervisor,” he said this week. San Diego County has actually had one of the highest ratings for a County in the United States since 2008, Abed points out. The County’s rating is AAA.

Roberts could be considered technically correct, however. He has been in office since 2013. So he can say correctly that he was supervisor when Moody’s upgraded the County’s credit score in 2014.

“This election is about credibility and trust,” said Abed. “Roberts continues to violate the public trust after the scandals involving his staff.”

Abed’s other opponent Kristine Gaspar, got a backhanded negative endorsement this week from San Diego County Gun Owners PAC (SDCGO), which released a political video that advised, “Don’t vote for Kristine Gaspar for County Board of Supervisors.”

“Mayor Gaspar supported and voted for a gun ban, but now that she is running for higher office, she says she made a mistake voting for a gun ban,” said Michael Schwartz, executive director of SDCGO. “We met with her and interviewed her thoroughly. We found out she flip-flopped not only on her gun ban vote, but on other issues like her plastic bag ban vote. We’d like to work to educate all local elected officials on Second Amendment issues. But when we cannot trust your word because you say one thing and do another or you vote one way and then tell constituents you did not, we are left with no choice than to oppose your bid for higher office.”

SDCGO is a political organization that focuses on Second Amendment issues at the municipal and county levels in San Diego.

SDCGO organizes the Second Amendment community and supports candidates who respect the rights of gun owners across the county. This week it gave a “Thumbs up” to both Dave Roberts and Abed.