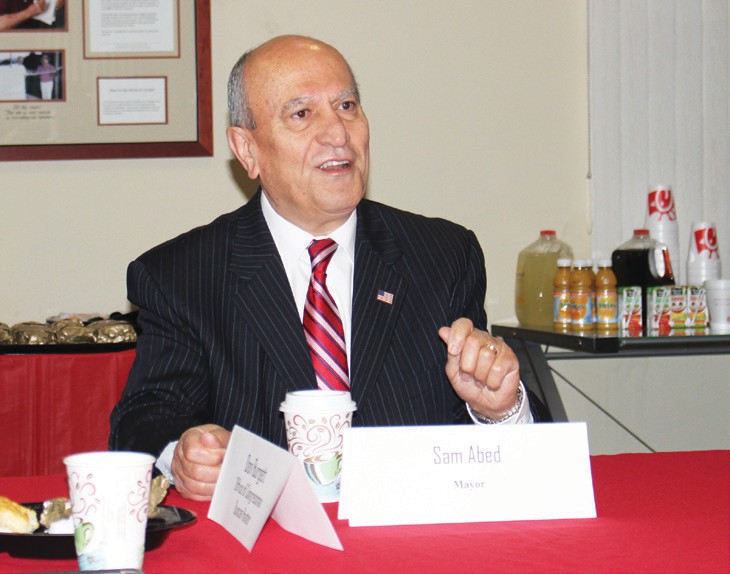 Mayor Sam Abed gave a presentation with hints of his upcoming state-of-the city address at Tuesday’s “Breakfast with the mayor,” at the Escondido Chamber of Commerce.

Every few months Escondido’s booster in-chief, Mayor Sam Abed, breaks bread with the folks in the form of the Chamber of Commerce’s “Breakfast with the Mayor.”

On Tuesday, the always upbeat Mayor Abed joined about a dozen business people for an informal give and take that started off with the screening of the video that ran at last year’s State of the City address.

“This is just the beginning,” he said. “I’ve been here in Escondido for more than thirty years. I love this city.” He spoke about his run against former Supervisor Dave Roberts last year, only to lose to Kristin Gaspar for the seat. He said he was actually sort of glad it turned out that way because he will continue to represent Escondido. “I want people who represent Escondido to have the highest moral standards. I ran because I was frustrated with Dave Roberts.” He said he intends to run for a third term as mayor.

The mayor gave some hints about the topics he will cover at the February 22 State of the City Address (see story, this page.) As is his habit he took wide swings at the profligate ways of the state and federal governments and contrasted them with the frugal philosophy of the city council.

“You have to spend what you make and that’s our approach,” he said. The biggest threat to the city, and to many cities in the state, is PERS, the state’s pension system, which keeps taking larger and larger bites out of the city’s budget. “We have to find $3 million extra dollars this year just to maintain services the way they are,” he said.

This in part explains the city’s aggressive moves to create more businesses, which then generate more taxes. The mayor touts the fact

Business owners listen while the mayor talks about various issues facing the city.

that 1,400 new businesses have started in the city since 2010 and last year 560 new businesses were added, (that doesn’t mean all are still in business, however.) “Escondido is becoming a very desirable place,” he said. “Escondido is running out of land to build but we have to make sure that what we approve fits in with our plans.”

The city is also carefully watching what the hospital district may do with the property that once housed the old Palomar Hospital. “We can’t afford not to have the highest and best use there,” he said. “We have no say in who they sell it to, but we have control over land use.”

Noting that the city provides 250 beds for homeless people but that there are now 500 homeless in the city, he said the homeless population increased last year by 175. This increase he blames on laws that have released more criminals and mentally ill into the population.

“Escondido is one of three cities in North County that provides homeless shelters but we can’t bear the entire burden. They are camping on Grand Avenue, camping behind your businesses, camping on Grape Day Park,” he said.

While criticizing the state of the economy, and the lack of economy by the state, Abed declared, “I believe in business and that government should get out of the way of business.” Speaking of the new president he said, “Trump’s passion is to create jobs and build the economy. The changes will be positive.” He believes the economy will begin to pick up by the end of this year.

The breakfast was sponsored by AT&T and Chick-fil-a.