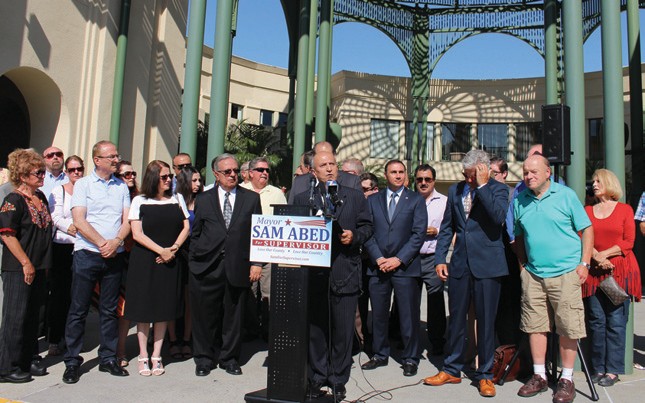 Under the dome of City Hall and surrounded by supporters, Escondido Mayor Sam Abed announces his candidacy for Board of Supervisors.

If Sam Abed has his way, Escondido will elect its first resident Supervisor of the 3rd District, and it will be him.

Monday the recently reelected Escondido mayor announced he would seek to unseat incumbent Dave Roberts from the Board of Supervisors next June.

A weakened Roberts, the subject of several unflattering revelations about possible misuse of public funds, and accusations that he has created a toxic workplace among the his 3rd District staff, is all but inviting rivals to file. Especially since Roberts is a Democrat and Abed is a staunch Republican in a city that has a solid Republican city council—with one exception, that of councilwoman Olga Diaz.

The mayor made the announcement on the front steps of City Hall, just under the latticework rotunda.

“It has been my great honor to serve as Escondido’s Mayor since 2010 and as a member of the City Council since 2004. Today, I am announcing my candidacy for the San Diego County Board of Supervisors – District 3,” he said.

Abed touted his fiscal creds, noting how the city turned around fiscally on his watch. “I am seeking this office to continue to serve our great city on a county level with the same commitment, hard work and passion I had the day I became Mayor. I will continue to serve, not only the citizens of this city that I love and deeply care about, but all the 630,000 citizens in the twentyfive cities and communities of district 3. We must restore the public’s trust in our county government. I will deliver on my promises and provide leadership that you can trust and deserve and I will not let you down.”

Abed revealed a long list of endorsements, including Congressman Darrell Issa, Assemblywoman Marie Waldron, Mayor Matt Hall, Mayor Judy Ritter, Mayor Jim Desmond, and a total of twenty current and former elected officials from San Diego County. His three fellow Republicans on the council, Ed Gallo, John Masson and Mike Morasco, have also endorsed him. Both Gallo and Masson spoke briefly about why they feel Abed will be a good supervisor.

“As term-limits prepare to create dramatic changes in the composition of the Board of Supervisors, it is essential that we fight to maintain a conservative, fiscally prudent county government. I’m proud of the legacy of fiscal reform that I will leave in Escondido, and I’m convinced there’s more I can do as a member of the County Board of Supervisors,” said Abed. 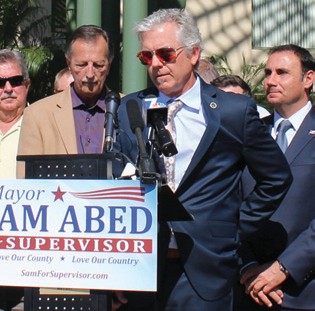 the largest city in the 3rd Supervisorial District, I kept the promises I made to voters, championed government reform and turned the city around. As mayor, I’ve focused on fiscal discipline, smaller government, public safety and economic growth. These same values will be my priorities as your Supervisor.

As mayor, I balanced Escondido’s budget and turned a $16 million deficit to an $8 million surplus without raising taxes. I not only safeguarded our budget reserves, but grew the rainy day fund to a $17 million reserve fund, which is one of the key reasons Escondido’s bond rating was improved to AA- under my leadership.”

Abed noted that during his watch the city attracted $500 million in new investments, more than 500 (net) new businesses and more than 1,000 new jobs.

“We accomplished all of these things while reducing the size of government, cutting wasteful spending, improving efficiency and streamlining regulations. I was also a leader in the fight for pension reform, a critical priority. We didn’t solve our city’s problems by sacrificing public safety either. We hired more police officers and efficiently staffed our fire stations. Last year crime fell by 22% in Escondido to the lowest rate since 1980.”

Abed concluded, “As your county Supervisor, I will remain strongly committed to maintaining fiscally conservative government and will work to create economic prosperity for our businesses and families. I pledge to work passionately to protect our freedom and to make San Diego the best County in America. I would be honored to have your support.”

On a nearby lawn Gary Gartner, spokesman for Supervisor Roberts, contested some of Abed’s comments and accused him of breaking his pledge to serve two full terms.

“Mayor Abed enters the race breaking promises that he made to his supporters that he would serve the citizens of Escondido for two full terms,” said Gartner.

“During Mr. Abed’s tenure as Mayor of Escondido, he has brought a polarizing atmosphere to City Hall by actively suppressing the civil rights of the most vulnerable. Abed has left his city mired in multiple lawsuits that will cost the city millions of dollars. In addition, one of two of Escondido’s libraries was closed under his watch only to be leased to one of Mayor Abed’s campaign contributors for pennies on the dollar.”

Roberts, on the other hand, “is hard at work finalizing the county’s $5.4 billion annual budget and doing the people’s work,” he said, adding, “He continues to prove the allegations made against him are false.”