On November 22, 2017 at approximately 5:20 a.m., the Escondido Police and Fire Communication Center received a report of a possible fire in the former Country Club Clubhouse, located at 1800 Country Club Lane. The first arriving unit reported heavy smoke and fire coming from the front of the single story abandoned building. Based on the conditions, a second alarm was requested and dispatched. Because of the heavy fire conditions, the danger from the roof collapsing and the building being abandoned, the fire was fought defensively from the outside.

Escondido Fire Department was assisted by neighboring Fire Departments including San Marcos, Vista, Valley Center and Carlsbad. In all, 10 fire engines, 3 trucks, 2 rescue ambulances and 3 Battalion Chiefs responded to the fire. The Escondido Police Department established and staffed several road closures that were necessary to protect fire hose and water supply lines. In addition, Escondido Public Works and Fleet Services assisted with the overhaul of the building by providing heavy equipment and logistical support. Support vehicles and personnel were also deployed to mitigate the water run-off from the fire scene.

The “Country Club Fire” was contained and extinguished in approximately 12 hours and there were no injuries to firefighters or civilians. The cause of the fire is under investigation. 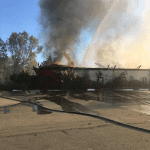 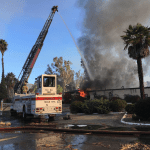 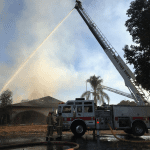