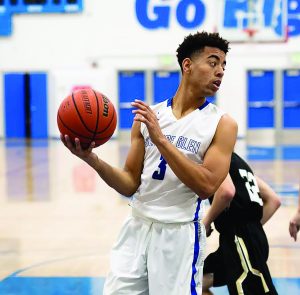 By any measure or standard, the 2016-17 Orange Glen basketball season was one to remember.

Was it exhilarating? Damn right! Was it thrilling? Oh yeah! Was it noteworthy? Without a doubt! And with just a slight variation or two, it could have been absolutely historic.

The Patriots’ gallant and rather extraordinary run came to an end when they fell short in a 72-62 overtime loss to Villa Park in the semifinal round of the CIF Southern California Division III regional. But what a ride it had been prior to that season finale defeat to the Spartans.

“I was proud that our guys did so well considering the key injuries that we suffered,” said engaged OG coach Chris Featherly, who just finished his 10th season of guiding the Pats from the bench.

Being without hard worker Gabe Macias for virtually the entire campaign and then having mainstay Trevor Owens go down with an ACL issue midway through the league schedule, deprived OG of a pair of stalwart starters. “Having to do without those two kids was tough,” admits Featherly.

But others either elevated their game or stepped into the breach to make sure that things continued to move forward. And wow, did they ever!

After having a highly successful 18-8 regular campaign that included a signature win over heavyweight Santa Fe Christian, the Pats really found a groove in the San Diego Section Division II playoffs, torching both Oceanside and Patrick Henry before springing a signature upset over No.1 seed Canyon Crest.

Then, in the championship game versus Helix, the Pats clawed their way back and staged a dramatic rally. Pivot man Nikola Kresovich, who can also stroke from distance, had a late three-point attempt altered by a lunging defender. Had the rock made it to the hoop and gone through, OG in all probability would have captured a CIF crown. Oh, what Kresovich would have given for just a couple more inches of clearance on his potential game-winning shot. 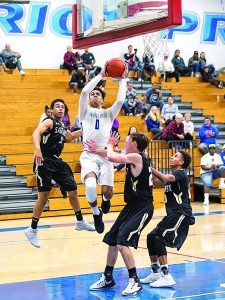 Nonetheless, the Pats had clearly demonstrated that they were battle-tested tough and ready for the next challenge, the State tourney. And despite their No. 14 seed, the Pats were not only oozing with belief but were convinced that they possessed the personnel, skill set and physical conditioning to challenge anyone that stood in their way.

The Pats first traveled to highly-regarded Capistrano Valley (24-7 and a three-seed) for a first-round tussle and proceeded to pull off a finish for the ages. After having missed a free throw, stellar guard Michael Diaz grabbed his own rebound, scored a monumentality clutch hoop and just as amazingly, drew a foul with a scant 13 seconds remaining. This time the senior converted from the charity stripe that brought the Pats to within one. After a pair of Capo free throws expanded the Cougar lead to three, it was left to Diaz to once again provide the heroics as he completely deflated his opponents with a buzzer-beating trey that knotted the score and incredibly sent the game into overtime.

And from there, it was whiz bang guard Damian Miller who simply took over, tallying nine huge points in the extra session that carried the Pats to an electrifying 68-65 triumph. The backcourt duo of Diaz and Miller had been nothing short of spectacular. The former enjoyed an encompassing game to remember, registering 22 points, seven rebounds, seven assists and a hefty four blocks. Meanwhile, Miller complemented his 17 markers with a pair of steals.

OG was living the most fundamental rule of postseason play, just survive and advance.

Next up was a six-hour road trip to take on the No.4 seed Selma Bears. In front of a raucous crowd of perhaps as many as 1,700, the Pats again found a way to prevail in the most intense of atmospheres. “It was really something up there,” says Featherly. “It felt as if the fans were right on top of us.”

For the Pats, they weren’t exactly operating at their best, missing more than a few bunnies, failing to hit from the line down the stretch and turning the ball over more than usual. But their commitment to defense saved them, with Featherly indicating that his team played well at that end of the court for a majority of the contest.

A William Pallesi trifecta staked the Bears to a 61-60 lead with 49 seconds left but by now, the Pats were becoming old hats at rising to the occasion in the late going. Again it was that man Diaz who delivered the hoop that reclaimed the advantage and when Caedon Palmer followed with a mega bucket of his own, the OG margin had stretched to 64-61 which is exactly how things finished thanks to a key Pat rebound near the end.

Though the offense has been somewhat spotty it nonetheless had been good enough to put the brakes to Selma’s 21-game winning streak with Diaz, his twin brother Devin, Kresovich, Palmer and Doup Chuol all scoring in double figures.

Having emerged victorious from yet another nail-biter, the Pats moved on in their bracket and moseyed on up the Interstate to take on Villa Park, a titan of a team from Orange County and the No.2 seed. But though OG showed plenty of want-to as well as aggression in the trenches, the visitors eventually found themselves in dire straits, down by 65-60 with less than 26 seconds left to go. And yet, throughout the playoffs, the Pats had proven to be tougher to kill than Rasputin so why should this game be any different? And sure enough, another incredible and rather unbelievable comeback was in the offing. 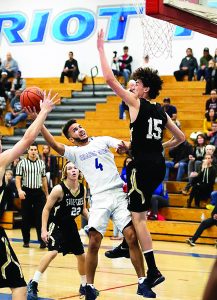 How much better would the Pats have been if productive scorer Trevor Owens hadn’t been sidelined by injury?

The accurate Palmer, who can be a deadeye when he’s on, set things in motion when he buried a three-pointer from the corner. Then the Pats put on a stifling full court press that allowed none other than M. Diaz to pilfer the in-bound pass under the Spartan basket and promptly put home the tying deuce that stunned the home fans and forced the game beyond regulation. Could the Pats once more defy some rather astounding odds and steal victory from the jaws of defeat?

Alas, not this time. Perhaps because of sheer probability, not to mention a pretty damn good Spartan squad, the Pats just couldn’t overcome what would prove to be the last obstacle of their remarkable season. VP never trailed in the overtime thanks to a Myles Franklin bomb from the outside and a 7-1 spurt that staked the Spartans to an insurmountable 66-59 edge. Despite a sterling performance from Palmer that saw him net a game-high 20 points that matched the total of  VP’s Caleb Banuelos, the Pats just couldn’t quite reach that coveted regional championship berth. A magnificent and determined postseason effort had at last run its course.

And with the end of the season comes the inevitable goodbyes to an outgoing senior class that was simply outstanding. Thanks in large part to these gifted players that developed a real chemistry and cohesion with one another, the Pats won 90 games over a four-year period, captured a SD Section Division IV CIF Championship, brought home a league title and made it all the way to the State regional semifinal. Now that’s a glossy resume of which to be proud.

Those departing and due to graduate are the following:

Michael Diaz – One of the most versatile and best all-around players in the County, Diaz can do it all; score inside or out, dish, rebound, defend and get a block or steal  An energetic and athletic guard, Diaz was often a walking double-double. His ability to meet the moment and make clutch plays while under the gun was remarkable. Considered to be of high character and very coachable, Diaz leaves a lasting legacy at OG. With a high ceiling, look for him to succeed at the next level where he currently holds offers from Cal Baptist, Point Loma Nazarene and San Francisco State.

Nikola Kresovich – This team captain was a real force underneath, whether getting hoops, defending or battling for boards. Moreover, Nik brought great range to his game as evidenced by his very effective bombing from the outside. Playing heavy minutes, this rugged and skilled competitor was a force to be reckoned with and really stepped it up in his final season as a Patriot.

Devin Diaz – Michael’s talented twin brother, Devin was in the midst of coming back from an ACL tear and had to reacclimatize himself to getting comfortable again on the court. Very athletic and blessed with a great body for hoops, this Diaz was a key factor in that he could contribute in just about any way that OG needed. Dependable, unselfish and totally focused on what was best for the team, Diaz really came alive in the postseason and showed that’s he’s clearly back to his productive self. Playing college ball should certainly be in his future.

Gabe Macias – It was a real shame that due to injury, Macias’s season was so truncated and included very few games. Totally committed to working hard and often drenching in sweat after  workouts, Gabe’s ability to stretch a defense with his ample offensive skills was sorely missed by the Pats. His presence on the floor undoubtedly would have made a difference. Perhaps taking the junior college route, Macias figures to have plenty of basketball left in him if he so chooses.

Trevor Owens – His season was trending just right when he unfortunately went down halfway through the league slate, never to return. A smart player and tremendous vocal leader, Owens was the team’s second leading scorer at the time of his injury. Owens had a knack for getting off creative shots and producing points from inside the perimeter. Even when he was sidelined, he remained a strong booster of his teammates and his continued encouragement spoke volumes about his selflessness and character.

Billy Mercado – Though he didn’t log a lot of minutes in the playoffs, Mercado nonetheless had his moments during the season, coming off the bench and giving his team not only solid play but providing admirable effort as well. His presence was greatly appreciated by his coach who doesn’t hesitate in singing his praises.

In a program that has become accustomed to embracing lofty ambitions, next year should be no different. With a solid returning nucleus of six players that will include the exciting Miller, shooter deluxe Palmer and the burgeoning standout Chuol, the Patriots figure to once again be a real factor on the court.

But they’ll have to do some mighty heavy lifting in order to match what their immediate predecessors accomplished. To say the least, trying to replicate what the memorable 2016-17 squad produced will be no easy task.