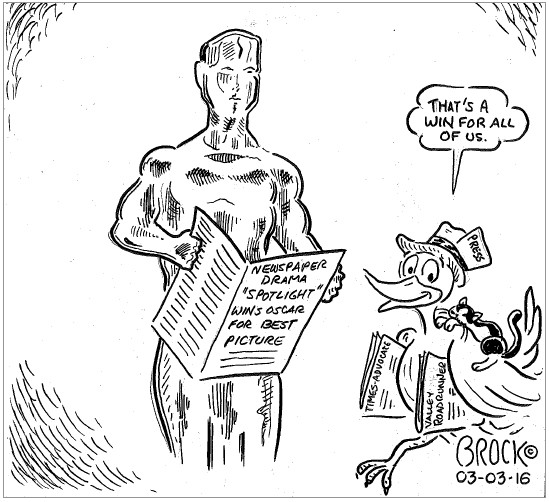 I was kind of gratified Sunday night when “Spotlight” won Best Picture and Best Original Screenplay at the Acade­my Awards. For those who haven’t seen it, the picture looks at an investigative newspaper team in Boston who uncover widespread abuse of children by Catho­lic priests in the Boston Archdiocese and the efforts by the Cardinal of Boston, Bernard Law, to cover it up.

Lest you think that this is a movie bashing the Catholic Church, the of­ficial newspaper of the Vatican this week praised the movie and the fact that it had earned an Academy Award. L’Osservatore Romano’s editorial was titled, “It’s Not An Anti-Catholic Film,” and declared: “[Spotlight is] not anti- Catholic, as has been written, because it manages to voice the shock and pro­found pain of the faithful confronting the discovery of these horrendous realities.”

Movies about newspapers are rela­tively rare, and I suspect that’s because most screenplay writers have a writing experience that didn’t begin in the news­paper business.

Rather than focusing on one central character, “Spotlight” is the story of a team of investigative reporters (called Spotlight) at the Boston Globe, a team made up of some interesting, dedicated and sometimes quirky reporters. It has standout performances by Mark Ruffa­lo, Michael Keaton, Rachel McAdams, Liev Schreiber and John Slattery and gives an idea of some of the unroman­tic drudgery and hard work involved in investigating a major story with dozens of threads that must be followed to their inevitable ends.

But some do. One of the best news­paper movies of all time, although not necessarily the most accurate, is “All the President’s Men,” which chronicled the work of the Washington Post team of Woodward and Bernstein as they worked to uncover the secrets behind the Watergate burglary, a scandal that ul­timately led to the downfall of President Richard Nixon.

I absolutely love the many incarna­tions of the play “The Front Page,” which have included “His Girl Friday,” a movie that has an intrepid reporter in­vestigating the framing of an escaped “killer” and an unscrupulous editor, Walter Burns, who bewails: “Why did I have to hire someone with a disease!” and when his star reporter leaves the pa­per to marry his sweetheart, gives him his watch as a wedding present, and then calls the police to ask them to arrest him, ending the call with: “______ stole my watch!”

In the past, newspaper reporters, at least in the movies, were among the most unsavory characters you might ever encounter. They were often slov­enly, unkempt, unclean, unscrupulous, but also as tenacious as rats chewing through insulation to get to the electri­fied wire beneath. Today that image of the reporter is usually (although not entirely) inaccurate and you don’t often have to spray Lysol at your everyday ink stained wretch at most publications.

I guarantee that’s true at The Times- Advocate. I’m not including movies about the news, such as “Broadcast News,” “Network” or “The Truth,” because newsgathering for television is a different animal than reporting for a newspaper.

There have not been any movies about community newspapers that I’m aware of. Maybe when I’m old and gray and retired I may write one.

In the meantime, I guess I’ll wait another decade or so for them to make another movie about newspapers.

ED GALLO SPEAKSAddiction to anxiety: hell is other peopleWelcome to the land . . . of magical thinking