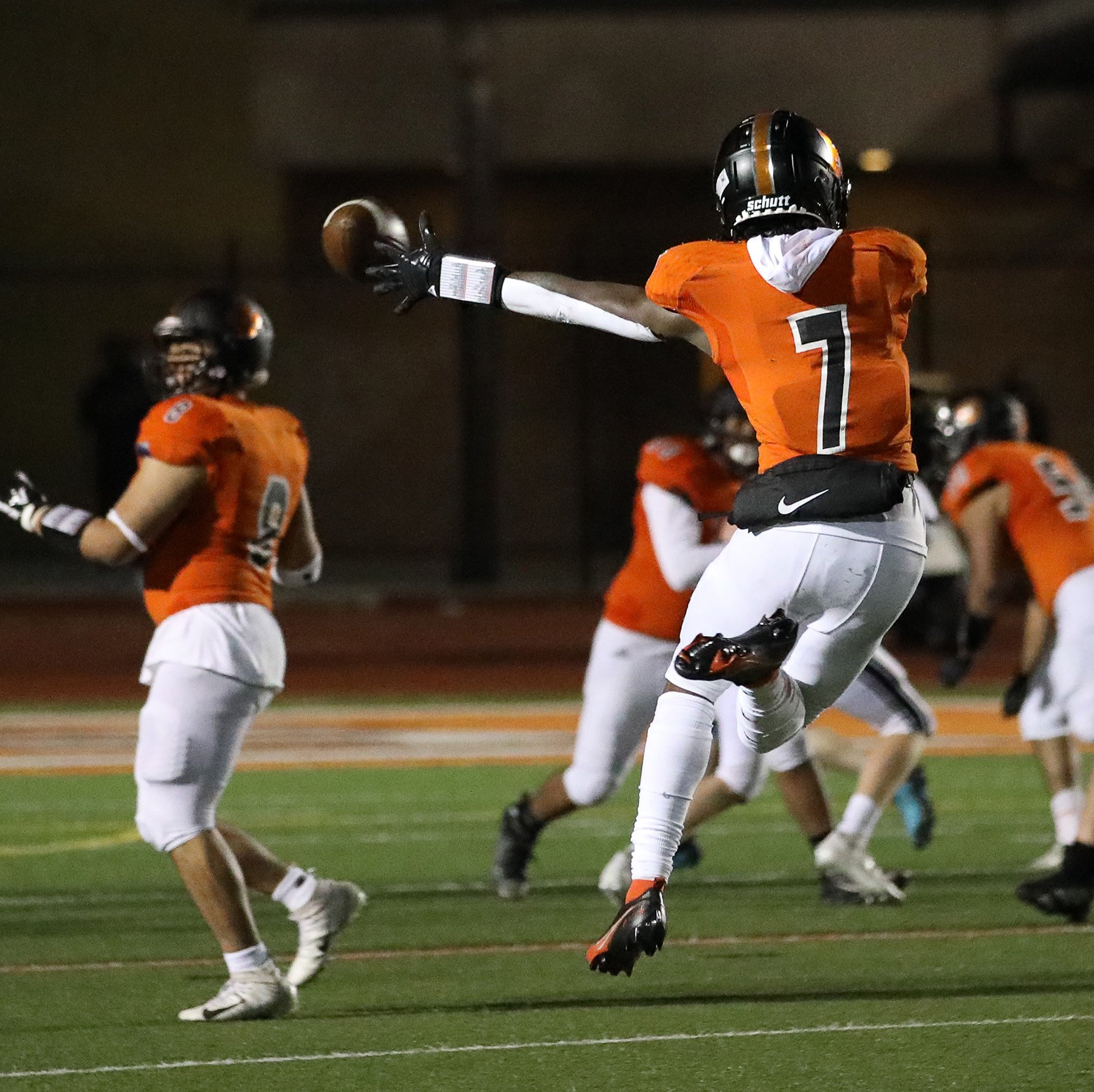 Though he couldn’t grab this Robbie Ramos pass, wideout Tajae Brooks made his share of big plays for the Cougars.

It was short, a bit surreal and certainly unprecedented.

Because of the unusual circumstances foisted upon it by the coronavirus, the 2021 football season (that is the one that took place in March and April) will long be remembered for its quirky nature, timing and somewhat different vibe.

But the most important fact remains that most teams were able to get in some semblance of a season when—for the longest time—it appeared as if prep football in California was all but dead until the upcoming fall. Being able to play to any degree did represent a victory of sorts.

Moreover, senior players weren’t completely aced out, Thankfully, they had a few final opportunities to compete and finish their careers on the field as opposed to having football totally taken away from them. Was the abbreviated schedule a bummer? Damn right it was but nonetheless it was a hell of a lot better than having nothing. Of all the injustices that could have happened related to the pandemic’s impact on high school football, having the senior class suffer through the misery of their remaining playing days dissolve into nothingness would have been at the top of the list.

So let’s take a brief look at some of the local Escondido-based schools and how they fared during a venture into a spring season never to be forgotten.

San Pasqual (4-1) – After getting taken to the woodshed in their opener against eventual Valley League champ Ramona (5-0), the Golden Eagles fashioned a marvelous rebound and captured their final four games. Coach Tony Corley’s squad showed plenty of heart and resiliency as it won in varying ways each succeeding week and finished the season with a bang that included telling triumphs over Valley Center and Escondido.

Quarterback Danny Davis developed into a difference-maker and he got plenty of help from standouts like two-way performers James DeBora, Matt Torres and Tyeric Milner. The manner in which the G. Eagles ascended during the season was really impressive and it proved to be one of the most noteworthy stories in all of the North County.

Orange Glen (3-3) – What will be most remembered about the Pats’ season are the big-time numbers put up by prolific quarterback Dennis Andrew and wideout Malachi Keels. Putting his right arm to terrific effect, Andrew led the entire County in passing yards (1,711) and touchdowns (16). Grabbing a lion’s share of those tosses was the fluid Keels, who was also tops in the San Diego Section when it came to receiving yards (868) and receptions (44). What a scary duo those two made. And the ground game definitely had its moments as well with running back Dayne Patterson doing some serious totin’ to the tune of 579 yards.

And while the defense experienced definite growing pains because it utilized some younger personnel, inside linebacker Isaiah Rascon was a force, pacing the team in both solo (32) and total tackles (46). Another defender of influence was Carlos Chavez, the team leader in TFL with 6.

This was a worthwhile building block season for Coach Jason Patterson and crew and with gifted juniors like Andrew, Keels, Jonathan Littlejohn, Da’Ron Reeves, Patterson, Rascon and Chavez all returning in the fall, the likelihood of a successful follow-up season seems quite high.

Escondido (1-4) – Don’t be misled by the record. The Cougars were a mighty competitive bunch who could have definitely added to their win total if they had been the beneficiaries of just a few more breaks or bounces. It is important to bear in mind that three of Esco’s losses came by a grand total of 12 points. And here’s another factoid indicative of the Cougars’ stoutness: Esco was the lone Valley League team that pushed unbeaten Ramona to the max before falling just short by a final count of 35-32. In their other four victories, the Bulldogs allowed no other opponent to come any closer than 35 points.

Though near-misses are not the aim of Jud Bordman, there’s no denying that the Esco coach has ratcheted up the interest in the program and is developing a culture whereby the Cougs are becoming one tough out. They’re on the cusp of something rewarding and it’s just a matter of time until Bordman’s guys start putting together a bundle of victories.

But they will have to do so without the help of special seniors such as quarterback Robbie Ramos, wideout Tajae Brooks, the versatile Brody Mossbarger, defensive end Ben Massie and linebacker Jesus Fraga—who will move on having been denied the chance to demonstrate what they might have done over the course of a full season.

Escondido Charter (1-2) – Because of circumstances their beyond control, the White Tigers saw very limited action. But getting a 14-10 win in their finale last week versus Maranatha Christian was huge on a number of fronts. In just the second year of a massive rebuild that coach Jon Goodman is orchestrating, positive reinforcement in the form of wins can’t be underestimated.

When Goodman first came aboard in 2019, he helped triple Charter’s win total from the previous season and he was hoping to continue that upward trend. But then the pandemic took hold. Without question it adversely affected teams that were undergoing a total makeover as were the White Tigers. If the momentum that Goodman had been nurturing wasn’t stopped, it was at the very least slowed down. At a time when Charter would have definitely benefitted from a traditional season and all the inherent training and practices that goes with it, the White Tigers were out of luck and had to make the best of a less than ideal situation.

And though the club has made tangible advancements since Goodman’s arrival as it relates to creating a positive culture and increasing its football knowledge, it’s hard to argue the White Tigers wouldn’t be even further along in the process had it not been for COVID-19.

Nonetheless, real progress continues to be made and with a roster chockful of promising youngsters who have gained some invaluable seasoning, a real breakout campaign could be right around the corner for EC.

Classical Academy (0-5) – After being dispatched by La Jolla Country Day 54-22, the Caimans finished winless though they hung tough in narrow losses to Orange Glen and Francis Parker.

San Pasqual Academy (1-2) – In what could have been their final game ever if the school does indeed close, the Dragons made it a memorable one with a 60-26 pasting of Horizon Prep. 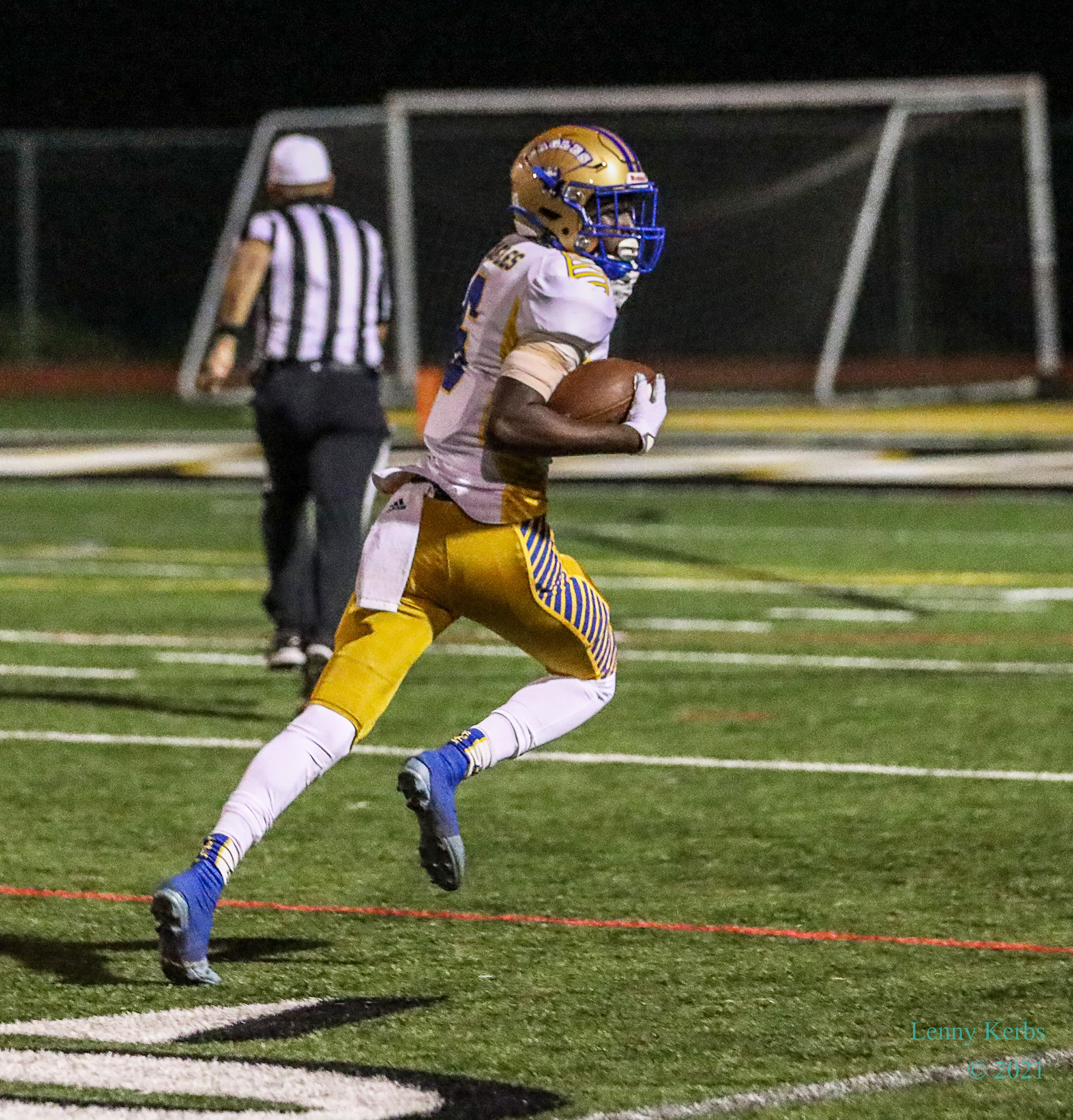