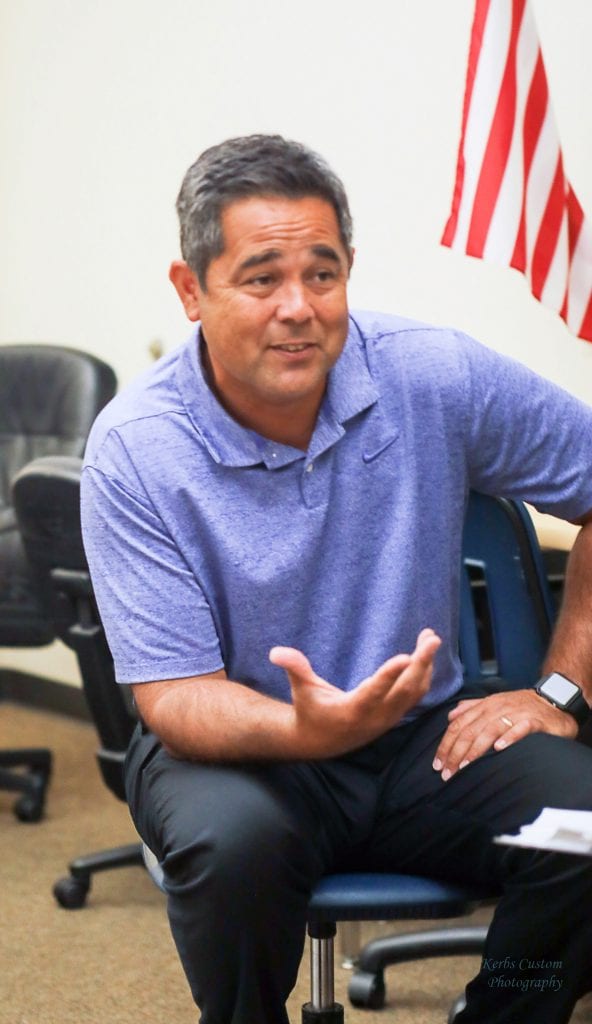 Compelling coach Jon Goodman has already made a definite impact at his new post with the Escondido Charter. Photo by Lenny Kerbs

Having highly-respected good guy Jon Goodman come over from Classical Academy to become the new head football coach at Escondido Charter was a huge get for the White Tigers.

Not only had Goodman guided the Caimans to three trips to the CIF semifinals but he had done so while fostering an environment where the overall development of the individual player superseded wins and losses. “Sports has an expiration date,” says Goodman, “but becoming a better person doesn’t.”

Goodman was admired and even revered within the Classical community because of the example he set and the integrity he embodied. He and Classical were a symbiotic fit that could have gone on successfully for many years to come.

But when Goodman was afforded the opportunity to mentor at a place that was founded by his high school coach Dennis Snyder and was in genuine need of rebooting, Goodman found the pull too hard to resist. He knew that in the grand scheme of things – and at that point in time – his services might be best utilized by accepting a challenge that would further his desire to positively influence the Escondido community as a whole.

Prior to Goodman’s arrival, the previous three seasons at Charter had been full of trials and tribulations. Undermined by a limited roster and some coaching instability, the White Tigers labored and won just three games during that period of time. EC was craving a committed and purposeful presence to take over and create a dynamic new culture.

Enter Goodman. Yes, Goodman is splendid at conveying the X’s and O’s and nuances of the game but his philosophy and perception of coaching goes far beyond than that. He seeks to reach his players at a deep, core level. “I want our guys to live pure and work hard,” he says. “My main goal this season is to help our young men find their purpose and realize that they’re not defined by a scoreboard.”

And already Goodman’s positive vibe and unique approach is reaping results. After suffering a narrow loss in a winnable season-opener versus Temecula Prep, the White Tigers (1-1) showed some real bite by impressively rebounding last week to take down host O’Farrell Charter 41-22. The contest was close at the half but Goodman encouraged his charges to take the next step and focus on finishing things off. Tellingly, they did just as their coach requested. “We showed some real grit and resiliency in that game,” Goodman says.

For a program hungering for success, securing an early victory could go a long way into helping to build a sustainable conviction that circumstances are definitely on the upswing.

Though the roster is are still rather thin with only a 20-man varsity, that doesn’t mean there isn’t ample talent to get the job done.

Operating out of a single-back offense, the White Tigers have a quarterback in Chase MacMahon who possesses a good arm, is extremely knowledgeable and qualifies as a consummate worker.

When it comes to the rushing attack, the tough and gritty Riggs Relatores will be the featured back thanks to his effective inside running and cutting ability.

Meanwhile, the receiving corps is comprised of four players capable of making a mark with gifted Shane L’Etoile and Jaxsyn Sealey expected to be the pacesetters. L’Etoile is a speedster with great hands while Sealey is a nice route runner with quicks.

As for the line, center and team captain Ethan Roberts is a heady performer with notable footwork while tackle Connor Wise provides both size and strength upfront.

Turning to the defense – which will function out of a Tampa 2 deployment – its strength resides at the two levels behind a youthful line. Mike linebacker Matt Shams is a gamer who can hit and exhibits leadership while fellow ‘backer Rocko Huntsman is a versatile athlete whose want-to is enormous.

And the secondary figures to be a factor because of the chemistry that flows between the senior trio of Justin Boissy, the two-way L’Etoile and Gunnar Campbell. Not only do they mesh as a unit but their ability to play well in space is conspicuous.

Finally, Goodman is confident that the special teams will hold their own with Shams handling the punting duties, MacMahon taking care of the placekicking chores while the combo of L’Etoile and Campbell are expected to do some damage as the return men.

One point that the humble Goodman is quick to stress is that without his dedicated staff of 15 assistants laying a great deal of the invaluable ground work, his task of reinvigorating the EC program would be next to impossible. “They’re a great group of coaches who not only love football but more importantly, they love the kids,” Goodman praises.

As his team gains in seasoning and if it can eventually wed the elements of preparation, knowledge and experience into a complete package, that’s when things could really start to hum. But for now, the White Tigers have demonstrated they can be quite competitive —and that represents a quantum leap forward from the recent past. It’s undeniable that Goodman’s influence is already casting a large shadow that portends exciting prospects for the future.

When asked what he hopes to bring more than anything else to his EC players, Goodman doesn’t speak in footballese but rather talks in a much broader context. “I just want to impact people in a positive way,” he begins, “and help bring them to a brighter day. I want to find out what unlocks their hearts and then tap into it.”

Based upon the results that the White Tigers have thus far achieved under his tutelage; Goodman looks to be doing exactly that. He clearly appears to be the right man, at the right place, at the right time!