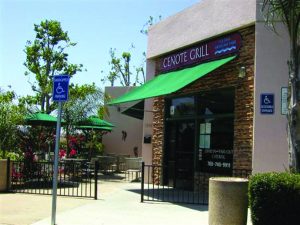 So what is a cenote?

Russ and Pam Taylor must have wondered this as they stared into a sink hole during their honeymoon trip to Chichen Itsa, near Cancun Mexico. But, they discovered, this wasn’t just any  sink hole; it was the Queen Mother of them, the Sacred Cenote of the Mayan Empire, used for all sorts of civil and religious ceremonies – including human sacrifice.  When the Taylors opened their new restaurant in Escondido in June, 2004, they were still possessed by what they’d seen and named their new eatery Cenote Grill.

Set in a 7-Eleven mall at the corner of El Norte Parkway and Country Club Drive, this small eatery serves traditional Mexican food in a decidedly non-traditional manner. Their burritos, for example, fold the rice and beans INSIDE the tortilla, along with salsa and chicken, beef or carnitas, then cover it with salad, guacamole, sour cream and more salsa. Almost as big as a loaf of bread, there’s always enough left over for the next day’s lunch. Same for the tostadas. Eat half for dinner and save the other two-thirds for lunch. Their chile verdi is outstanding and the mole sauce is home-made and marries up equally well with enchiladas, burritos or chicken fillets.

I’ve never paid more than $15 for an entrée, so I can fill my stomach without emptying my pockets. And then, like the always friendly staff, leave with a smile on my face.