A lot of rock breaking for Miller Plaza 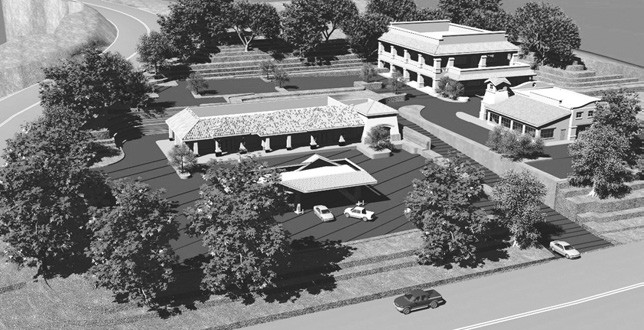 Some businesses do numbers crunching. Others do rock crunching. There’s a whole lot of rock breaking going on a granite hill overlooking the corner of Miller & Valley Center roads. You can hear the sound of metal on rocks for more than a mile around the site.

The Times Advocate talked to Napoleon Zervas of VCVP Ltd. (formerly Valley Center View Properties) this week about the project, which has been dubbed Miller Plaza.

“We’re about fifty percent complete with the grading,” said Zervas. “We will soon be exporting rock fill directly across the street—which is a separate county permit.

About half of the site is pre-leased. One will be a Shell convenience store and gas station. “We have some doctors and locals coming in,” said Zervas. Spaces for restaurants, retail and offices are available in the 16,000 square foot project.

“We are trying to finalize construction details with the county and start going vertical when the grading is done in about sixty days,” he said.

Construction should be completed by February 2016. The project is expected to cost in excess of $5 million.

Zervas conceded that a lot of rock crunching is going on at the site. “We are trying to save as many rocks as we can. The community would like us to use as many rocks as possible for landscaping. There are a lot of challenges and constraints of the terrain.”

Nevertheless, quite a number of rocks that locals consider somewhat “iconic” have been lost to the development. At least one such huge boulder rolled down the hill earlier this year and almost took out a commercial structure next to the site. Fortunately, trees slowed it down.