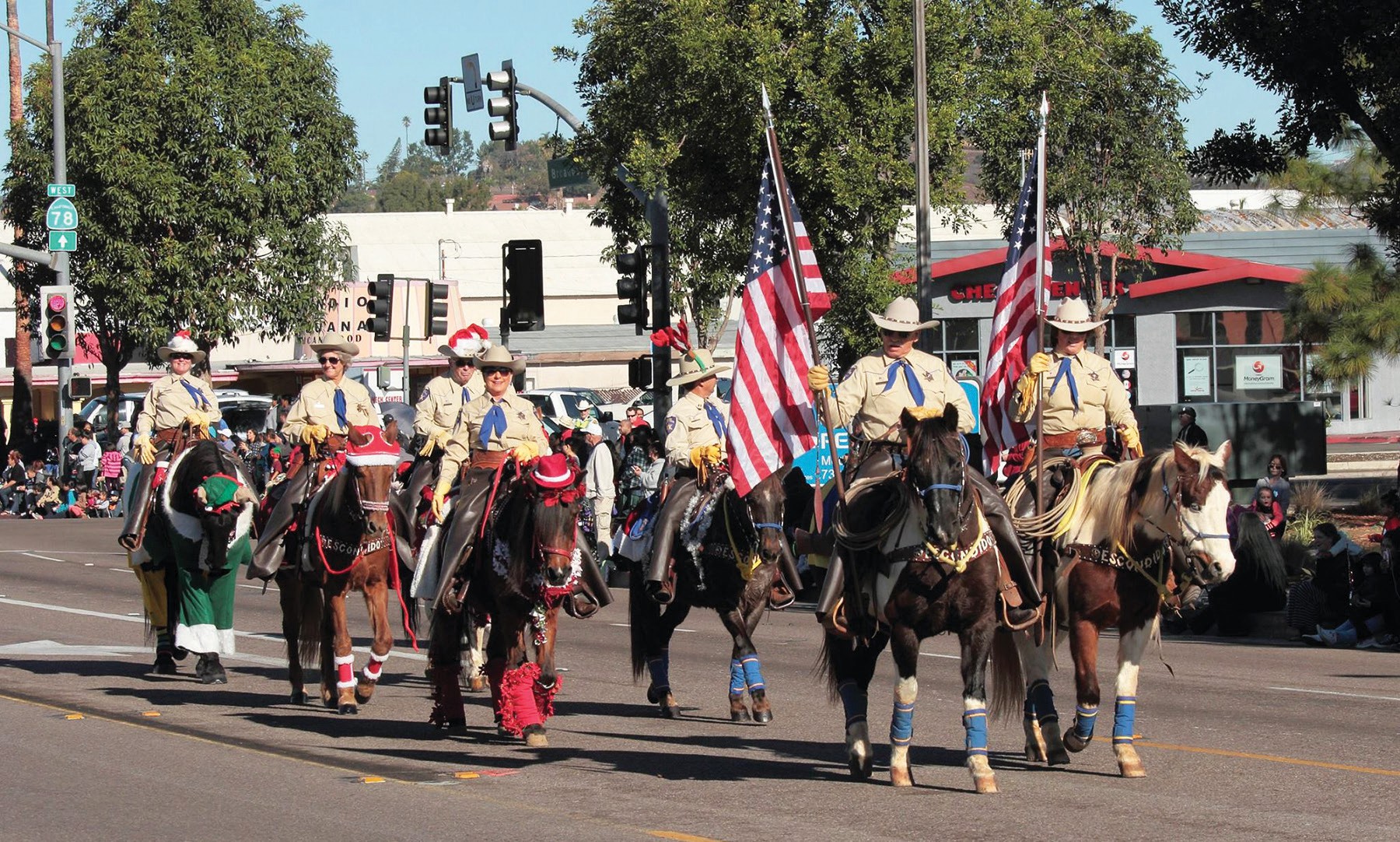 The Escondido Mounted Posse Color Guard will lead off the parade.

The 66th annual Jaycees Christmas Parade December 10 is a holiday tradition that typifies the joys of small town America — including hosts of walking Boy and Cub Scouts, sports teams, equestrian units, high school bands, and lots of fire engines. About 10,000- 15,000 spectators are expected.

Because it’s the 66th Christmas parade along Broadway, the theme this year is “Route 66,” the historic, iconic highway that millions of Americans drove to get their “kicks” in the 1950s and 60s.

The parade will begin at 9:30 a.m. and follow Broadway from Escondido High School to Grape Day Park, about 1.5 miles.

Last week we talked to Kim Michel, this year’s chairman of the parade, which is put on by the Jaycees (Junior Chamber of Commerce,) a group of Escondido residents who range in age from 21 to 40.

Michel, who is an optometrist, has a long history with the parade. “I was in the parade when I was 5 years old!” she said. That year she was dressed as Gretel in a Hansel and Gretel float. Her mother, Debbie Michel, came up with the idea for the Route 66 theme.

Keeping with Route 66 theme, the grand marshals will be C.A. & Debbie Stevens former owners of Apple Valley’s old Summit Inn diner, which they owned for more than 40 years. The Summit diner burned down a few years ago.

When parade organizers called the couple to ask them to be the grand marshals, they 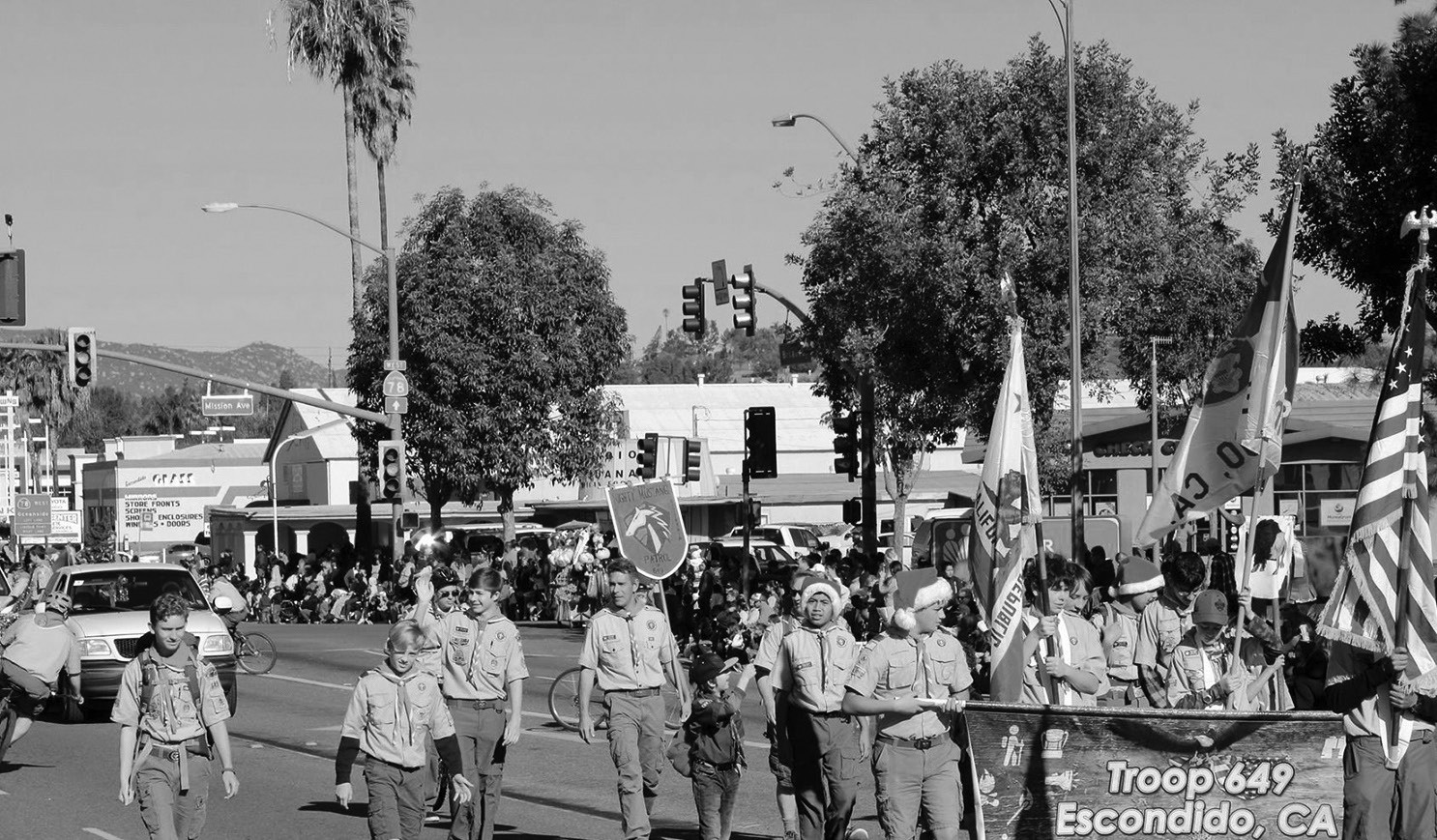 The Jaycees Christmas Parade is known for its hometown feel, where you will see marching units like this Boy Scout troop.

had to repeat several times, “This is not a scam” before the Stevenses would believe them. Once they believe it, they were delighted to say yes. This may be the first time that the parade’s grand marshals come from out of town.

Michel and her crew have been working on the parade since August. And it won’t end until the parade is over. Not that she expects to actually “see” the parade. She will be too busy making sure it’s going off without a hitch. “It’s a big job,” she says. “But it’s also a big joy!” The Jaycees are a relatively small group, with about 15 active members. They meet the third Wednesday of the month at 6 p.m. at various restaurants around town. They are always looking for new members: hint, hint.

Escondido Ears, the ham radio group, will furnish about 35 volunteers who will be positioned along the parade route. About 50 volunteers total make it all happen. Escondido Police Department will also be out in force with volunteer off-duty police to help keep the traffic in order.

There will be something more than 103 entries in the parade. Many of them will be returning participants. 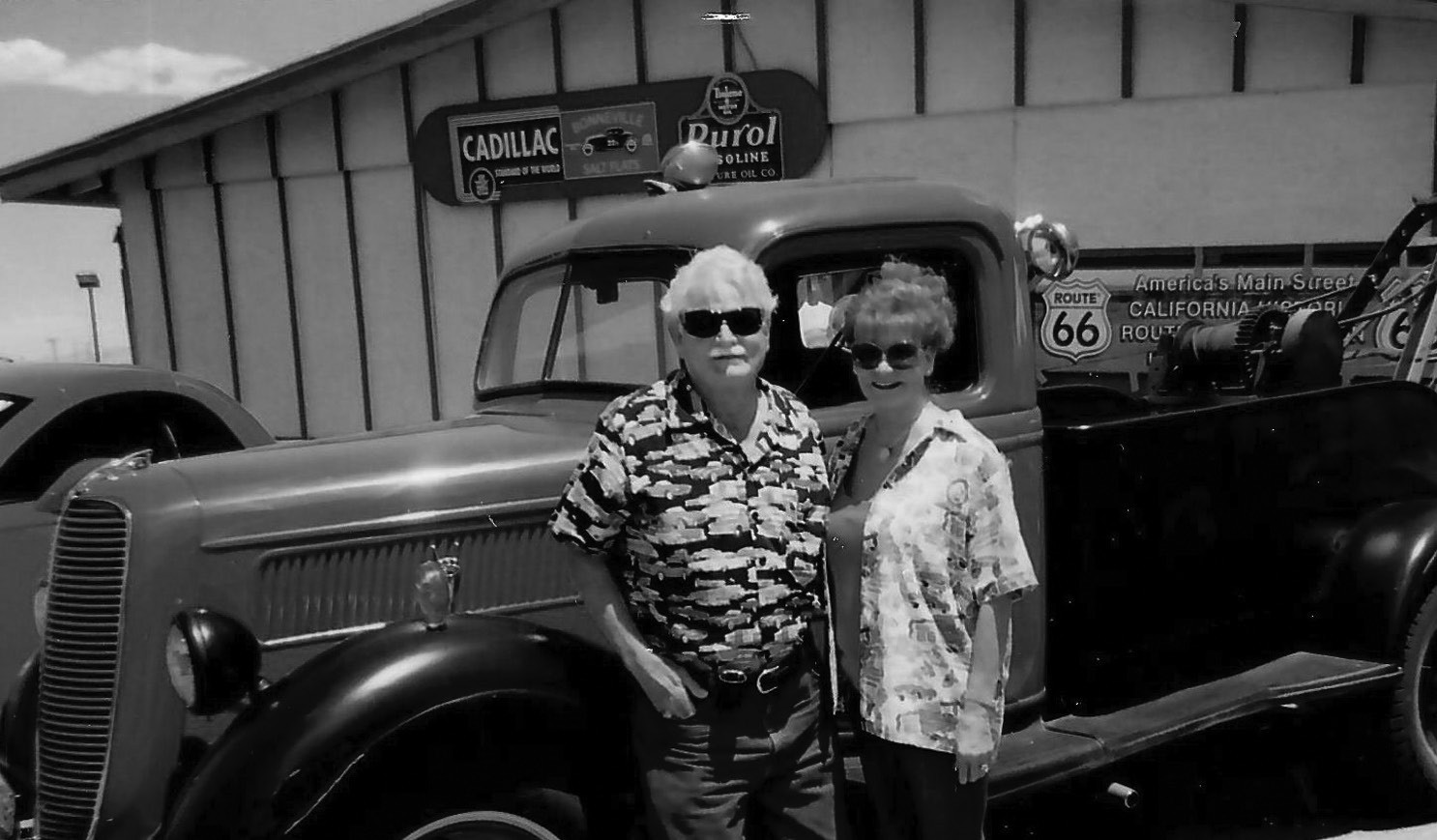 C.A. & Debbie Stevens of Apple Valley will be the grand marshals of the parade. Their Summit Inn Diner was a legendary stop along the old “Route 66.”

will be several mounted groups, such as the Escondido Mounted Posse, as is traditional, Santa Claus will bring up the rear, riding on a big fire engine. Speaking of fire engines, there will several engines provided by the Escondido Fire Department, including an antique 1926 American La France fire truck and several trucks from Western Heavy Equipment.

Other expected entries include the Robotics Club of San Pasqual HS and the Classical Academy, who are expected to enter small robots (hopefully not of the Westworld variety!) that will drive themselves along the parade route.

Several classic car groups are expected to participate, taking advantage of the Route 66 theme. “We are reaching out to the class car groups in our area,” Michel said.

“I love the Route 66 theme,” she said. “I feel like Escondido has such a classic car connection.

Michel said she was looking forward to a Model T care being provided by the Escondido History Center.

VIPs will include Mayor Sam Abed, members of the city council, and Assemblywoman Marie Waldron of the 75th District.

Awards in 16 categories, such as walking groups, floats, bands and equestrians will be given trophies. The trophies will be handed out at a stage that will be provided by the USA Multicultural Holiday Festival, which will be taking place immediately after the parade at Grape Day Park.

And while awards ARE important, they are not the be all and end all of the parade. “It’s more about

Kim Michel, this year’s chairman of the parade.

the fun of it,” said Michel.

Also taking place after the parade will be the 5th annual Christmas on Maple, from 10 a.m. – 3 p.m.

This event follows the 66th annual Jaycees Christmas Parade with lots of fun FREE activities for your family.

Did you make your list and check it twice? Come shop at our Holiday Boutique where organizers have assembled over 50 plus vendors selling unique and hand-crafted items to help you finish your holiday shopping. There really is something for everyone, including your pets.

Many small local businesses and restaurants have deeply discounted specials for the holidays.

Highlights of Christmas on Maple include:

50 Plus Vendors at the Holiday Shopping Boutique.

Photo Op with Santa – Tired of the long lines at the Mall? Bring your cameras and cell phones and get a picture with Santa.

Letters to Santa with Santa’s mailbox.

After the Christmas parade, head over to Grape Day Park and continue the celebration at the Multicultural Holiday Festival in Grape Day Park from 11 a.m. – 7:30 p.m. Bring the kids and meet Santa and Mrs. Claus.

That’s also where the awards for the parade will be announced.