A drop of solution in an ocean of problems 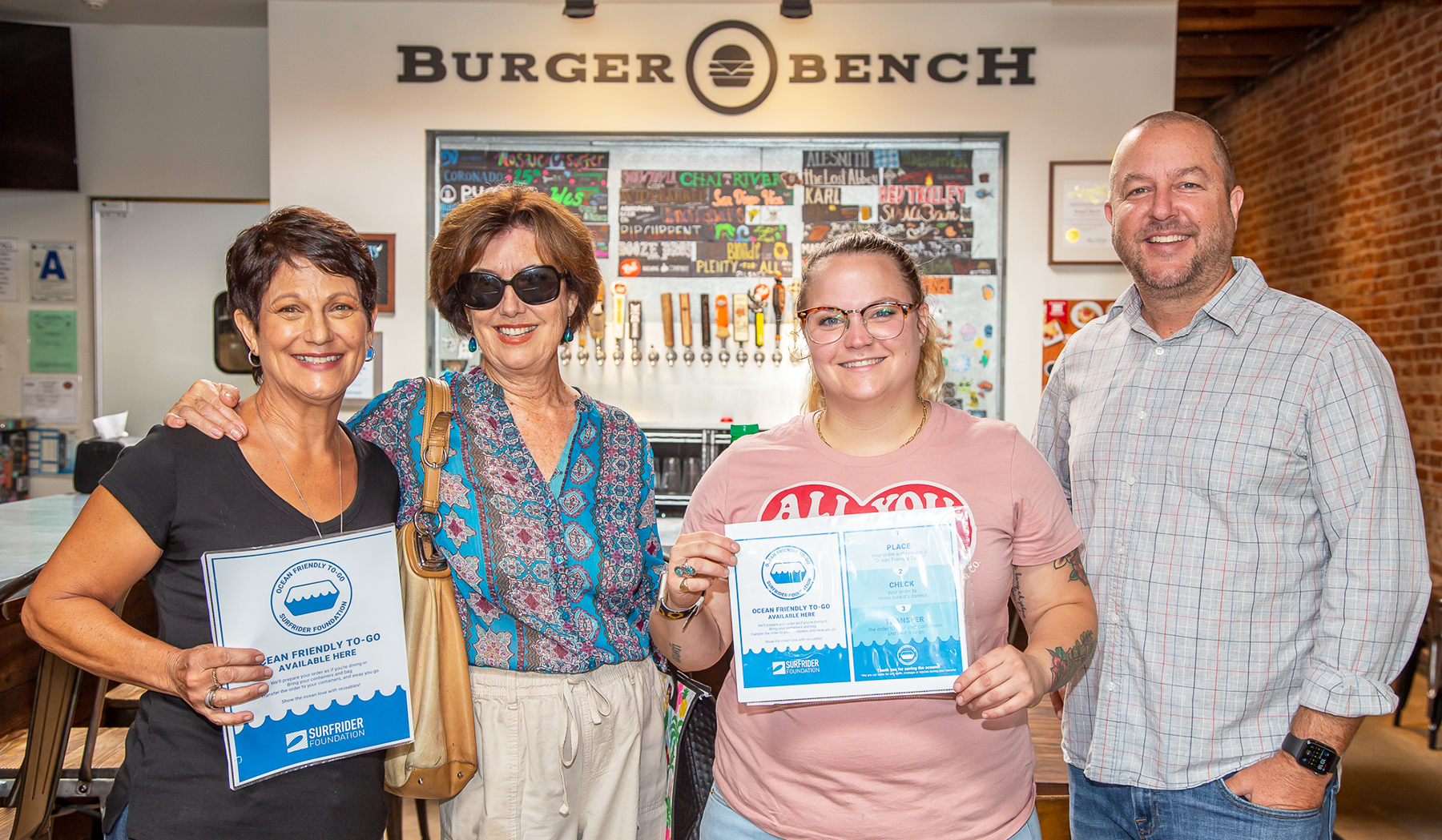 Hoping to make a difference a small Escondido group of passionate advocates are making waves to soothe some very troubled waters.

Hidden in those waters are phantom islands where vacationers would likely never want to venture.

The Great Pacific Garbage Patch (GPGP) is reported to be one of those massive islands of plastic refuse, measuring hundreds of meters in width, length, and depth.

Images of plastic bottles, containers, bags, drinking straws, utensils all floating side by side creating this mass of debris as far as the eye can see come to mind. Not what you call an ideal exotic destination.

Unaware of the impacts of such huge amounts of plastic rubbish in the ocean and overwhelmed by everyday living, the average American has an out-of-sight, out-of-mind attitude settling for the thought that it has no direct impact on their way of life. Most are proud and pleased to help by placing all plastic items with the identifying recycle triangle in the blue recycle bins. All is well. Problem solved.

While this seems to be a monumental global problem, Escondido’s Ana Marie Velasco feels it can be attacked one meal at a time. Velasco along with a city council approved Waste Subcommittee are working to keep plastics from polluting the environment. The group was formed in 2020 and includes Janis Jones, Velasco, Gina Ruiz, Aisha Wallace Palomares, Maria Wallace Palomares, Thor Emblem III and Adrianna Vasquez.

Alarmed by all the ocean of trash, they have decided to be a drop of solution in this vast ocean of problems. They have approached all the restaurants in town inviting them to be part of the international Surfrider Foundation’s Ocean Friendly-To-Go program ( www.surfrider.org/) to not only reduce the plastic waste created by carry out food containers but to also sow the seed of change to the polymer paradigm.

The program allows customers to voluntarily bring their own reusable containers to a participating restaurant for a carry out order and for servers to not automatically include plastic utensils, straws, condiments with a to-go order, but to provide them only if asked.

For the Surfrider Foundation, this program is part of their mission to help protect the ocean against anything that is a threat to the vitality of the ecosystem and to clean water.

According to Surfrider’s website, single use plastics are creating a major pollution problem. Although the organization believes that some plastics are beneficial in the making of computers, vehicles, and medical equipment, they maintain that single-use plastics used for temporary storage, food packaging or takeout orders are often discarded and end up in the ocean forming these islands of waste.

There are presently five of these floating masses that are formed by ocean currents called gyres. The GPGP within the North Pacific Gyre, closest to us, was discovered by Capt. Charles Moore, the founder of the Algalita Marine Research Foundation. Moore was sailing from Hawaii to California when he and his crew were astonished by a cloud of plastic particles in the water all around the ship as far as the eye could see.

Plastics do not decompose; they simply breakdown by the sun’s rays through a process called photodegradation. They break into ever smaller pieces called microplastics creating a kind of cloudy soup mixed in with larger plastic items. Scientists speculate that 70% will sink to the seafloor creating an underwater trash heap.

Microplastics, mistaken for food, can choke fish, birds, turtles, and whales among others. They are ingested by fish we catch and eat.

An online National Geographic article explains how plastic debris in the ocean can precipitate a chain of events that threatens the food chain. (www.nationalgeographic.org/encyclopedia/great-pacific-garbage-patch/)

A study from the QUEX Institute found plastic in every seafood sample suggesting that those who regularly eat seafood are also regularly eating harmful plastic.

Surfrider maintains that up to 11 million tons of plastic is dumped into the ocean every year emanating from overflowing landfills or as litter left on beaches.

According to a recent article in National Geographic there are now over a thousand rivers worldwide thought to be responsible for carrying dumped garbage from environmentally unaware urban populations. The Tijuana River is a case in point.

The article states that the 3,915-mile Yangtse River that flows through China was thought to be the largest source of plastic pollution, but it has now been surpassed by the much smaller 16-mile Pasig River in the Philippines that passes through Manila, home to 14 million people.

To reduce plastic waste Escondido Disposal Company (EDCO) collects paper, metal, glass and hard plastics for recycling. They do not collect soft plastics used for bags and food wrappers. EDCO sorts, and groups the plastics according to type determined by the number in the triangle. Each group is compressed into large blocks and shipped out to various plants that reprocess the plastic making not only new containers but also clothing, shoes, carpeting and more. According to Bob Hill, Director of Recycling, Marketing and Logistics for EDCO, all plastics are recyclable with very few exceptions.

Yet not all items end up recycled. As sorting machines separate the different plastics, a utensil or small item may be missed and will contaminate the load. Reprocessing plants, not set up to sort, will discard the entire batch. Although EDCO has a sophisticated and state of the art sorting system, not all systems in the country or the world are equal, and contamination occurs regularly. Globally, somewhere between ten and twenty percent of contaminated plastics intended for reprocessing go to the dump. 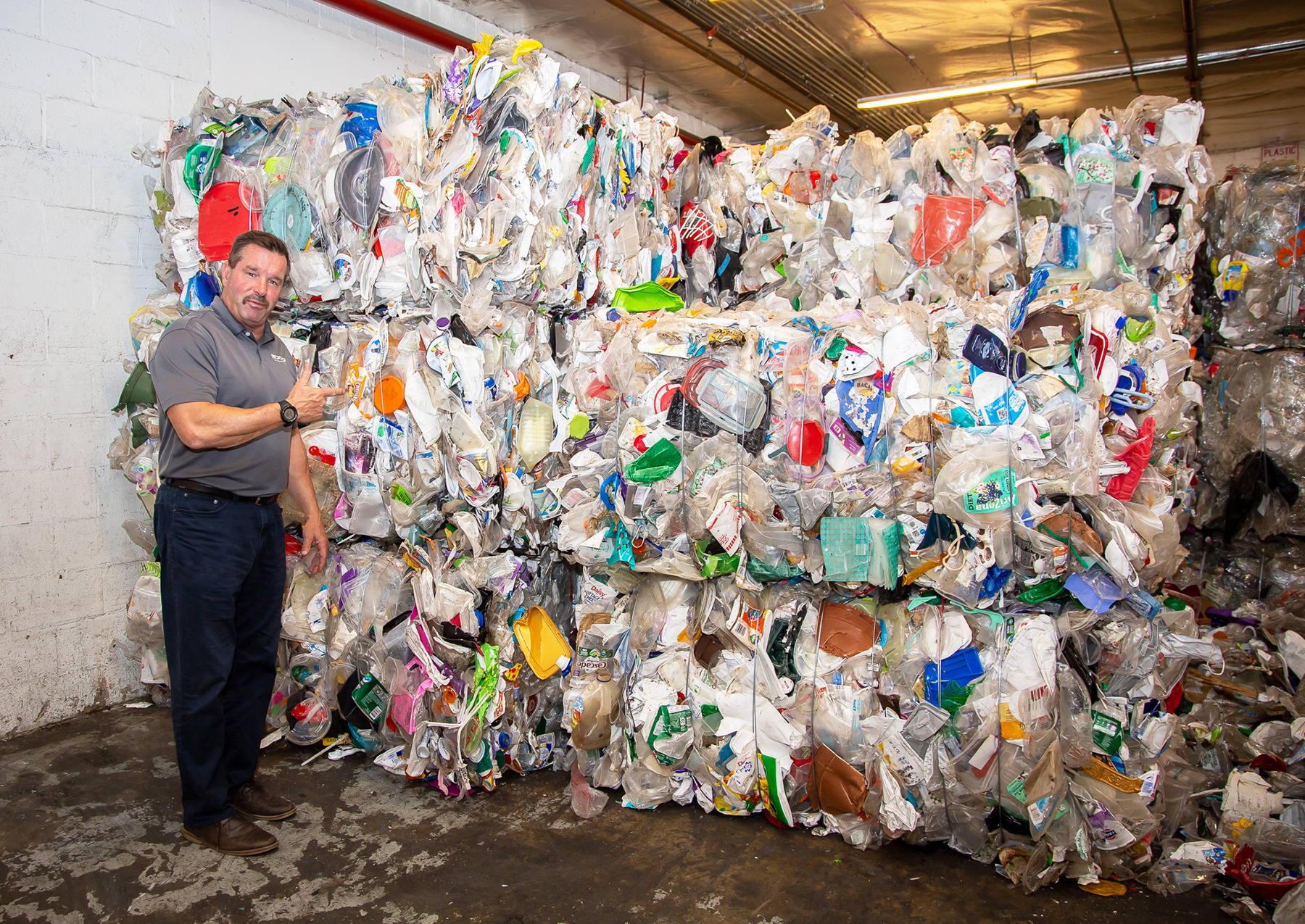 Director of Recycling Bob Hill at EDCO pointing to the blocks of compacted hard plastics headed for recycling.

Most plastics can only be recycled a certain number of times before the molecular structure is compromised and they end up in a landfill where they degrade producing toxic fumes. The consensus is that when all is said and done, less than ten percent of all plastics are truly recycled.

Ecologists see the world defined by what she called the “three pearls of sustainability” represented by three concentric circles of equal size. One represents the business world, the other the ecological world and the third represents the social world.

“Right now, the biggest circle is the business side,” said Hickman-Gibb. “It’s the tail that is wagging the dog. The two smaller lobes are social and environmental. We need to re-align that.”

She explained how any change in one circle needs to consider the impacts on the other two. It is a fine balance riddled with complexities. And although small local environmental movements with good intentions may make those engaged in it feel good about doing something, she believes that it is a mere drop in a sea of ecological challenges. According to Hickman-Gibb the actions needed are far greater involving huge sums of money to mobilize educational programs, manufacture and install devices that capture plastic refuse in the rivers before it reaches the ocean, and to research affordable and innovative ways to deal with the billions of tons of plastic in landfills.

Meanwhile, Velasco and her group of environmental advocates would like to see an ordinance passed locally to push restaurants to adopt Surfrider’s Ocean-Friendly-To-Go program following in the footsteps of neighboring communities in North County.

According to Ruiz, it is a case of leadership and that leaders in our community need to show the way to do what is beneficial for society. She sees this as a movement toward changing the paradigm for the betterment of humanity.

Both Councilmembers Mike Morasco and Tina Inscoe consider themselves environmentally conscious. They recycle and support doing it. They both want to encourage restaurants to do what they can to reduce plastic waste—allowing restaurants owners and managers to decide for themselves what is best for their business and the environment.

“People are capable and have a right to make a determination on their own whether they want to be responsible citizens,” said Morasco. “If restaurant owners or managers decide to eliminate or adopt a different system or format, more power to them. They should be able to do it. How they will utilize plastics available to them in the city should not be mandated by local municipalities.”

Morasco, having worked in third world countries, brings a global perspective to the topic.

He thinks that government can help educate and facilitate without being heavy handed and create rules, mandates, and ordinances forcing and restricting people based on a personal perception of what is ideal.

“If people want to be educated, there is so much info available on the city website and at EDCO,” said Morasco, a self-professed fanatic recycler. “Less government overreach and oversight are always better if you are able to achieve the same outcome through education.

Agreeing with Morasco’s position, some residents suggest that rather than imposing mandates, government would do well to incentivize restaurants and businesses for mitigating plastic trash.

Velasco sees the program as win-win. By not automatically offering plastic utensils and containers that often end up not being used and thrown away the restaurant owners save money by reducing their overhead and the environment benefits. It does however require the customer to be informed and prepared. It is a transition much like it was converting to reusable shopping bags.

“Who will break the cycle first,” said Hickman-Gibb. “There is only so much you can lay on Joe Public. Not easy problems to pull apart. You have to always look at all the ramifications.”

Meanwhile, Surfrider conservationists are urging everyone to stop plastic at the source and move away from unnecessary single-use plastics.

Velasco and Ruiz, promoters of this program, trust their activism is more than a drop in the ocean, and enough to save what they fear may be a sinking ship.

Subjects arrested in tent with drugs and firearmsYes, the fishing is great, but Lake Wohlford’s real value is key part of local water systemBrown Act lawsuit dropped against Palomar Health