A day in the life of an Escondido police officer 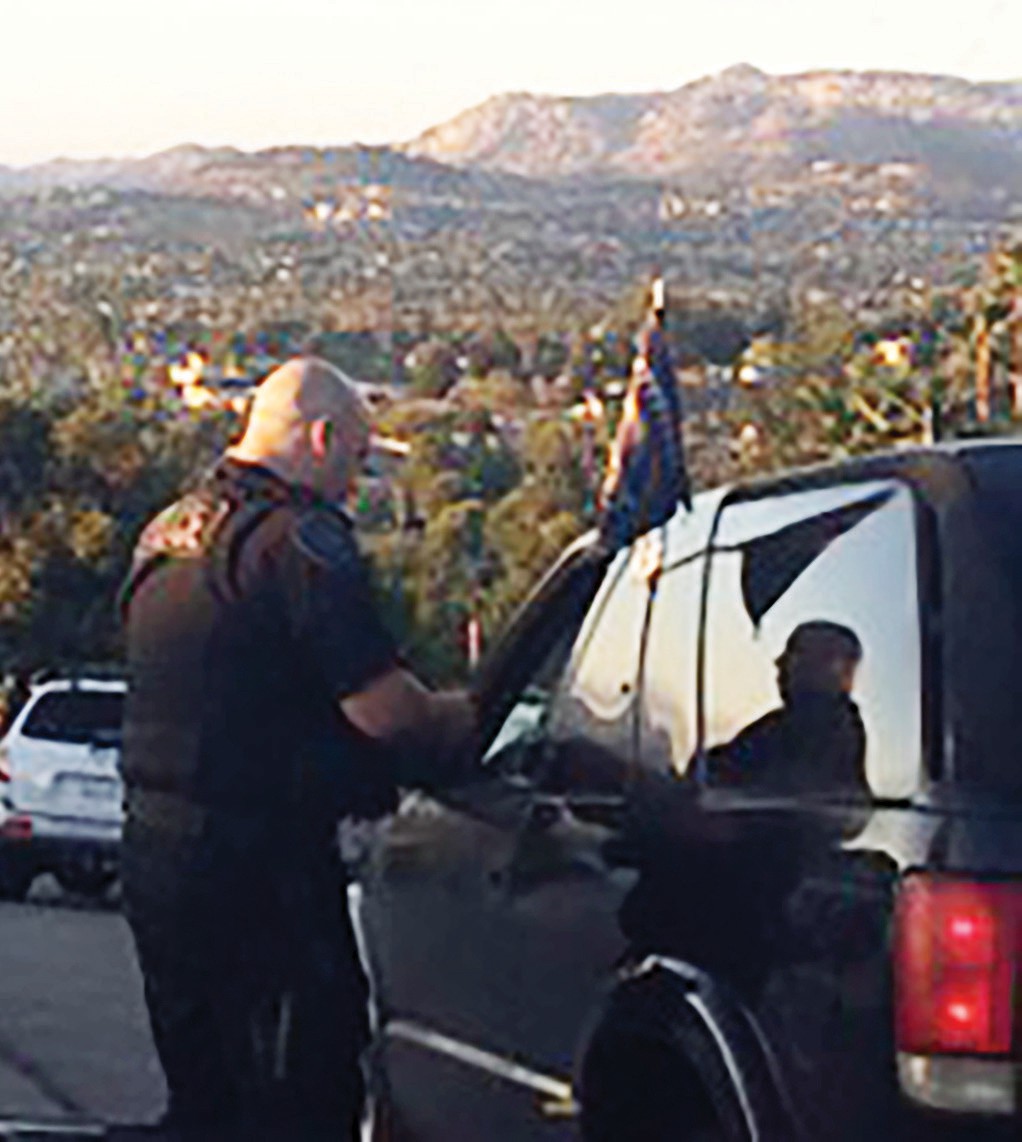 Last week we showed you how the Escondido Police Department was helping in the community through the Neighborhood Transformation Project (also known as NTP) in the West Side of Escondido.

This week the Times-Advocate was allowed to go on a ride-along with one of the officers of the Escondido PD — to describe a day on patrol. The ride-along occurred on October 11. The officer we rode with may be a familiar face to some of you: Lt. Ed Varso, Public Information Officer (PIO) of the Escondido PD. Varso has been PIO since January. When Varso is not updating the media on current or ongoing investigations, he is working alongside the gang and special investigations units.

Our first order of business at Police Headquarters that afternoon is a briefing for all the officers clocking in for the swing shift. Reporter’s note: Due to security concerns, some officers described in this briefing will be identified only by their rank and the first letter of their last name, so as not to compromise their safety.

In charge of the briefing is Sgt. M, Sgt.W and Lt. T. Sgt. M starts the meeting by updating officers on the recent shootings in Palm Springs where two police officers were shot and killed over the weekend (October

Following the update Sgt. M gives instructions on how to attend the funeral for the fallen Palm Springs officers. Next on the agenda, Sgt. M hands over the meeting to Sgt. W who is sitting to the left of Sgt. M, hands out assignments and what sections of Escondido they will be patrolling for their shift that day.

Sgt. W asks Lt. T the on-duty station commander if he has anything to say. Lt. T reminds officers “To think about your safety and the safety of your fellow officers.”

Lt. T also tells officer to not second guess themselves and to follow their gut instinct in difficult situations, and “Don’t hesitate to call for backup” if they find themselves in harm’s way.

Lt. T than hands it back to Sgt. M who thanks Lt. T for the reminder and asks one of the female officers in the briefing to explain a recent incident involving a police officer getting beat up in Chicago.

The incident, as reported by the Chicago Tribune last week involved a Chicago female police officer who was beaten to a pulp by a suspect who was high on PCP (Phencyclidine) that the officer was assisting following a traffic accident. The article explained that the unidentified officer “did not use her gun to defend herself,” due “to fear of backlash” and “she didn’t want her family or the department to go through the scrutiny the next day on the national news.”

After the officer finishes her description, Sgt.M says, “Incidents like this are happening in police departments across the country.” The term being used by other police departments to describe this, says Sgt. M, “is the Tulsa effect. This is when a police office always second guesses his/herself because they are afraid that they are going to lose their job due to their actions.”

Sgt. M again reminds officers to use their best judgement, and “if in doubt to call for backup.” He dismisses the briefing and everybody prepares to go out on patrol.

Lt. Varso and I walk out to the garage outside of headquarters where they keep the patrol cars. We are out on the street by 3:30 p.m. going down Centre City Parkway — or as it is sometimes known — the 15 business loop.

We aren’t on the street for long when a call comes over the radio about a suspicious person in front of the Carl’s Jr. off Quince and West Mission. Lt Varso responds to the call. I ask who will be in charge of the call. He says an officer is already on scene and we will be backing her up.

It is common practice in most police departments to assign one officer per squad car but occasionally another officer will back up the responding officer. For example: if an officer pulls a person over for a routine traffic stop another officer will usually back up the responding officer. The only exception to this rule is in the major cities like Los Angeles, Chicago and New York where there are two officers per squad car, according to Lt. Varso.

When we get to the scene I see what Lt Varso describes as a “routine check on a possible gang member.” Varso says, “A concerned citizen called the PD thinking this suspect was acting suspiciously.” The suspect is handcuffed and being questioned by a female office. After a few questions and frisking for weapons they let the suspect (now no longer a suspect) go on about his business.

I ask Lt. Varso what kind of officers the Escondido PD recruits. “We look for the best of the best,” he says. “Officers must be good writers, good social services workers and good investigators.” Varso continues, “Officers must show a true desire to work in this job.” They must also care not only about their own safety, but the safety of their partners, and the safety of the community. Varso also throws in some praise for the department’s 911 dispatchers. “Dispatchers are the unsung heroes,” he says.

I follow up by asking how much time the police spend on mental health issues. Varso estimates that 1,334 calls last year were due to mental health related matters. He says “Police officers are often the ones who have to deal with people with mental issues.” He describes a specially trained group of officers called the Psychiatric Emergency Response Team or PERT for short.

The team consists of a licensed mental health clinician and a dedicated Escondido police officer who work together to assess a mentally ill individual. Assessments are completed in a respectful and professional manner, and are intended to provide the most appropriate assistance available. The assessed individual is 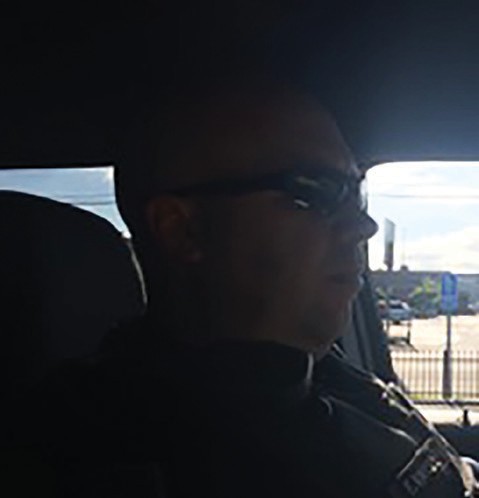 Lt. Ed Varso, PIO out on patrol on Quince and West Mission in Escondido.

generally referred to a community based mental health facility that can provide crisis intervention, outpatient care and case management services.

However Varso says that, “Disturbance calls are the most frequent call.” The department has “responded to over three-thousand-six-hundred disturbance calls,” this year alone, he says. “Disturbance calls cover a whole host of issues; everything from arguments between neighbors, family related matters, arguments at bars, etc.” He adds, “These are just calls from the public, and do not include the number of traffic stops or other proactive contacts that our officers make on a daily basis.”

It is approaching 5:30 p.m. when we receive a call over that there is another suspicious person in a truck parked in the middle of a field in Old Escondido off East 5th Avenue and Circle Drive.

Lt Varso responds and we make our way to the scene. We find a truck parked near the field on the street. Varso approaches the vehicle and speaks to occupants inside (see photo.) While this happens another patrol car arrives to back us up.

There are two people in the truck: a known gang member and his girlfriend. “The gang member was unlicensed to drive a car, but since he was parked he was not in violation of any laws,” Lt.Varso tells me. “The driver was warned to not drive away or he would be issued a citation and his vehicle would be impounded” and “the gang member would have to get someone to give him a ride home,” Varso says.

As we leave Old Escondido we receive a radio call from Police Headquarters on Centre City Parkway about two transients who are arguing in the HQ parking lot. When we get to Headquarters at about 6:35 p.m. there is a middle-aged man and elderly woman arguing over their possessions.

The two are homeless and have been living in the man’s vehicle together for an unspecified amount of time. Due to some disagreement the man wants the women out of his car along with all her possessions that were in the vehicle. Two other officers are already there when we arrive on scene.

Lt. Varso and I are next to the woman, who is crying on the sidewalk, while the two other officers try to calm the man down, who is a short distance away, and appears to be very agitated. After about 35 minutes the officers on scene decide to send the women to a senior center somewhere in Escondido and arranges for the man to drop off the woman’s possessions at the senior center.

Back at the patrol car I ask if scenes like that are common. Varso says, “Yes it is actually quite common for people to bring their problems — even small ones — to Police Headquarters and to involve the police to help solve the problems that they face.”

We head back out into northeast Escondido. At 7:26 p.m., as we approach the intersection of Mission and Centre City Parkway, a call comes over the radio and an officer advises that she is in a foot pursuit in the West Side of Escondido. We respond to help. In about 30 seconds we go from Mission and Centre City Parkway, down the 15 business loop to 9th Avenue where Lt. Varso silences the sirens and drives up and down the streets of the West Side looking for the suspect.

About five minutes later Lt.Varso returns to the patrol car. “Officer Robbins stopped the suspect — who was riding a bike — for a traffic violation at 7th and Quince which then turned into a foot pursuit.” Varso continues, “The pursuit ended when Officer Robbins had an unexpected run-in with some cactus, which she got out of relatively unscathed.”

Although the suspect got away, “Officer Robbins did recover a backpack that contained a meth pipe along with other drug related paraphernalia,” says Varso. After this he drops me off at HQ which ends our ride-along.

It is not often that this reporter will comment on his own articles. But I have to say that after spending a few hours with the police department, I have a new-found appreciation for our police and what they have to go through day in and day out.

What some people don’t realize is that the police are human beings too and they put themselves in harm’s way every single day. I watch cable news or read stories online of groups such as Black Lives Matter condemning the police after these shootings which in some cases they (the police) are defending themselves. I want to remind folks of what is now known as the Tulsa effect, when an officer or officers are constantly second guessing themselves in fear for themselves or their families.

I am not saying that people don’t have a right to protest. What I am trying to say is that there is a complex investigative process and that we should let that process be completed before passing judgment. So in closing, I remind people that the next time you protest our police; remember that they are not out to protect certain Americans — they are out to protect all Americans.