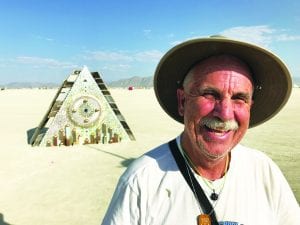 The author on the playa where there were dozens of art pieces. Attending Burning Man has long been on Dennis Tomlinson’s “Bucket List.”

Everyone has a bucket list. If you don’t have one, make one now if you are 71 years old.  There are just so many opportunities in your life and when one comes up … jump on that train because it might not ever happen again!

My youngest son, Chad, 29 years old, said to me “Dad, I know that this is on your bucket list so you are coming to Burning Man with me! But you will not be getting any birthday presents, Father’s Day presents, or Christmas presents…. not even a card for the next two years!” Of course, I accepted his offer. Slam dunk.

Burning Man started in 1986 at Baker Beach in San Francisco with some guys burning a man made out of some wood. It is the largest art festival in North America and  presently held  at Black Rock City, 100 miles north of Reno, Nevada, in the middle of a very dusty desert. This year about 70,000 people showed up for the event, which started officially 6 p.m. Sunday August 26 and ended Sunday September 3 after the burning of the temple around 8 p.m.

After spending 12 days at Burning Man first thought in my mind is that this is the most iconic annual event in the world and the largest art festival in North America. Absolute craziness, overwhelming and so on. You have to go at least once. Hurry, you are not getting any younger.

I was part of a camp called WMICC (55 people,) an organic fruit and vegetable stand, located at 3 and K. I will explain what 3 and K means later.   Katie, a girl from San Diego, brings 3,000 pounds of fruits and vegetables and gives it all away. The watermelon, tomatoes and cucumbers were the best I have ever eaten and I grew up on a farm.

There is no money exchanged at Burning Man. The only thing you pay for is your ticket ($425) and ice ($4 per bag) which is sold every day at many locations. And if you are part of a camp you pay for that camp’s theme or reason for being there. Chad paid for my contribution of $150 to pay for the organic fruit and veggies. Everyone has something to give and/or share with the whole city. 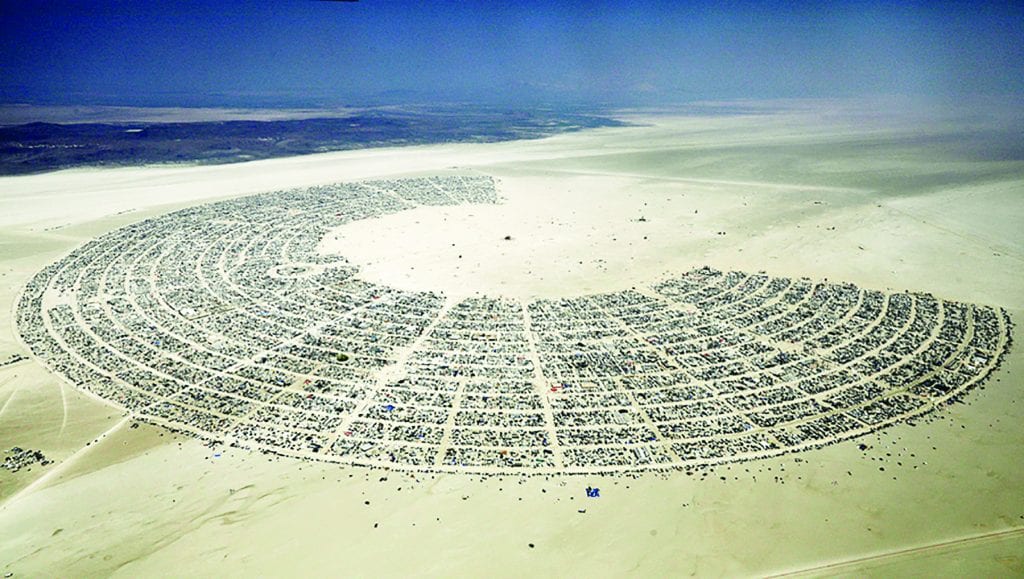 Black Rock City from the air, with its temporary population of 70,000.

Going to Burning Man is like you are going to an island with just sand and no shade in the middle of the ocean. No water exists in Black Rock City (hereafter BRC) …you bring your own water with you, plus your food, etc. Remember, you are on an island and cannot take a shower in the salt water. So, you can clean yourself with a sponge bath or use baby wipes. Are you still interested in going?

You get around the city by riding a bicycle. You can walk but it is 112 degrees some days, over-cast some days, and gets cold some nights. This is the high-desert. For example, Palm Desert and Borrego Springs are in the low desert.  Yucca Valley, and Landers are in the high desert — high meaning higher elevation (3500 feet). You wear a hat, sunglasses, and put on lots of sun-screen.

First question people ask me…is there any music? All kinds but mostly EDM, (which stands for electronic dance music) that has a steady “boom-boom” bass beat. Very annoying for me and it goes almost 24/7 at Burning Man. I attended a bluegrass concert that was really good. A father with two sons from North Carolina and a few other members to make up a band played at an open-mike location. At this concert, the father said to the crowd, “Wish I brought a gun so I could shoot out all the speakers of those places that are playing that boom-boom (blank)!” There was just one night of hip-hop dancing of which I attended with three girls from our camp. Literally, there are over a hundred places to dance every day and night.

What is there to do? Take your pick. Everything your mind can think of or can come up with happens at BRC.   We are talking San Francisco, New Orleans, Las Vegas, Coachella Valley music festivals and every carnival that goes on in the world all rolled into one. There are tons of seminars to go to, i.e. The Five Languages of Love (a popular book) me being 71, understood and practice three of them but still think about the other two. 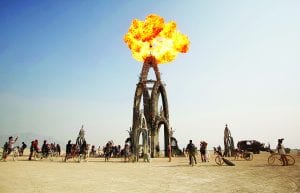 Flames erupt from the Flower Tower.

What is there to eat and drink? You really could survive without bringing any food or water. Seriously, just bring a reusable cup and maybe a bowl and plate and you are good to go. Remember there is no money involved. Everything in the food and drink category is gratis! I loved The Lost Penquin Café because they had 24/7 lemonade and snow-cones.  During the day, they served lemonade with Vodka. And there was red and white wine there too! That is where I spent every afternoon playing boogie-woogie on the piano and jamming with others from 1-5 p.m.

Got lost one night because at 3 and K the lights were off on the 55-foot tower which was my land-mark.   Ended up at the Leopard Lounge (free massages.) They said come on in, we just made lasagna and garlic chicken and a beer. Delicious.

Any Entertainment? Are you kidding? The whole BRC is entertaining. Everywhere you go brings new things to do and experiences for the first time. There is way too much to do. I figured out in my 10 days I did 2%. That leaves 98% next time! Go to www.burningman2017.com. Everything is listed alphabetically. It will take you at least one hour reading through them. Read the Ten Principles of Burning Man, which explains the purpose, premise, and reasoning for this event.

This year’s theme was Radical Ritual so there were a lot of temple-like things built. There were nine burnings.  The Man burned Saturday night and the Temple burned Sunday, the last night of Burning Man. Two were on Thursday, five on Friday. There were 23 weddings of all kinds on Friday.

Being 71 years old and attending this event is like riding a Harley-Davidson motorcycle by yourself, or riding a horse at a gallop, or playing ice-hockey… doing any of these tells you want to do it again! I have done all three—played ice-hockey until I was 50.  If you can handle all kinds of people of all ages walking around 24/7 nude and the extremely microscopic dust, then this is the place for you!

Oops! Forgot about 3 and K. The city is laid out like a clock and then concentric circles starting from the center which is a mile in diameter and goes from A to L. Each letter is maybe 150 feet apart, so the whole city is about 2 miles in diameter not counting The Playa. You will have to read about that yourself online. My camp (WMICC) was at the intersection of 3 and K.  The other three corners had Naked Zebra (ladies fashion clothes like you find at Nordstrom run by four ladies,) the Tower (55 feet high) that you can climb to the top; built by one man who brings four kegs of home-made beer, and the Bar (Mactropolis) run by Pavrick and his 93-year old father. Three days a lady brought home-made breakfast burritos to the Bar.  Stuff arrived all morning long. It was a popular place to start the day with coffee, a beer, or a Bloody Mary.

And the “art cars”— the most incredible decorated golf carts, cars and buses, etc. in the world—over a hundred!  Again. go to the website and check them out.   Fifteen percent of them shoot fire from propane tanks and almost all of them play music. Go to their base camp and you can ride any of these all over the city all night long.

So, thinking I have seen everything at the age of 71—wrong! There are probably 101 things I have not seen in the world and will not because the world is a big place.  I have not been to Alaska, Cuba, Jamaica, Japan, Ireland, Scandinavia, Egypt, Nova Scotia, Fenway Park, Wrigley Park (note:  Dodger Stadium is the 3rd oldest park in the country), and many other places.  What are you doing next?  Where are you going? Better hurry.