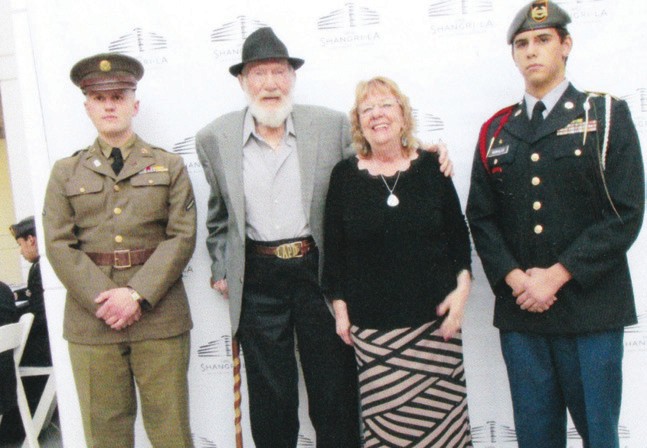 Hank & Donna Weldon (center) at the Diamond Jubilee celebration of the Shangri-La Hotel in Santa Monica.

Hank Weldon of Valley Center, 91, was among the elite WWII veterans feted at the Diamond Jubilee January 17 celebration of the Hotel Shangri-La in San Monica, a hotel that many of Weldon’s comrades from the war used to congregate during the war.

Hank and his wife Donna got a phone call a couple of weeks ago. “A guy we know named Eric Simmel called us and said he wanted us to be on a train to Santa Monica for the 75th anniversary,” she told the Times Advocate.

The Shangri-La Hotel was known for its military clientele during the war. The OSS (Office of Strategic Services, the organization that was the ancestor of the modern CIA) frequented the hotel. About 250 attended the celebration.

As part of the presentation audience members learned about the historic connection between the Commonwealth Sea Reconnaissance Unit, the OSS and the Navy Seals.

Weldon, who as a Navy frogman took his life in 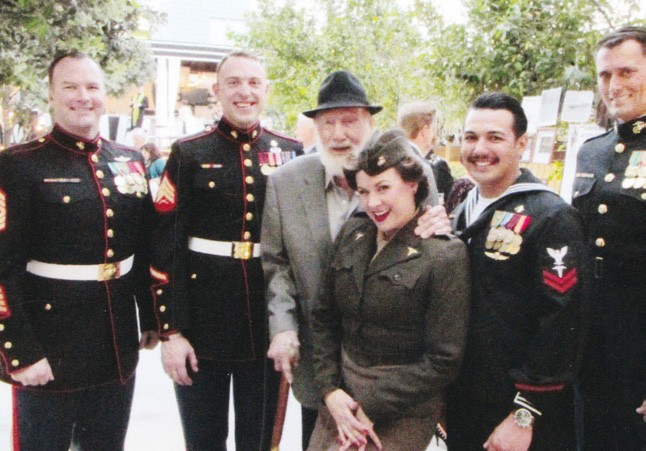 Hank Weldon with some current-day American heroes and a member of the Satin Dolz singing group.

his hands every time he donned a wetsuit and flippers, was a member of an Underwater Demolition Team in the Pacific during WWII, under orders from the OSS (Office of Strategic Services), forerunner of the modern CIA. Their mission was to sabotage and infiltrate the enemy.

Most who served in Weldon’s unit were swimmers. Most were lifeguards. He was a high school swimmer and lifeguard.

The rigorous training of Weldon’s unit served as a guide for other special units that evolved to fight the Cold War.

“We set the guidelines more or less for the training that the Special Forces, Seals and Rangers and Raiders would go through. We were doing in those days what they are doing now except that we were doing it without SCUBA. We did it with a faceplate, fins and a knife, and sometimes a .45,” recalls Weldon.