75th Anniversary celebration: Escondido veteran has vivid memories of war . . . and its end 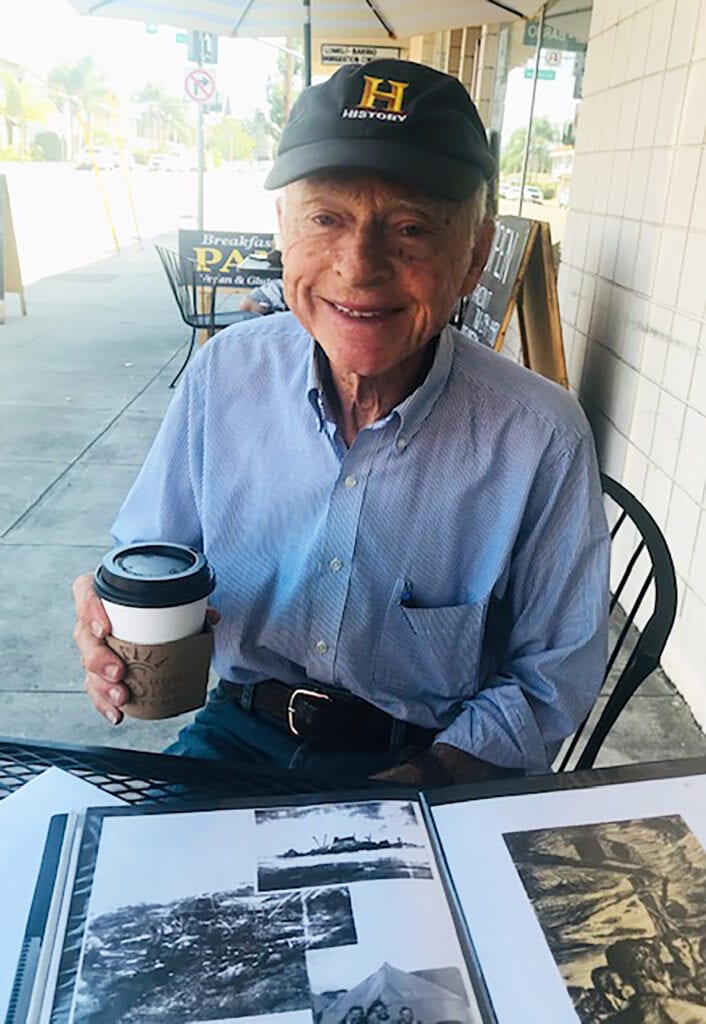 Army life during WWII provides a wealth of vivid memories for veteran Andre Chappaz of Escondido.

Escondido resident Andre Chappaz has an especially detailed memory about the moment that he and his fellow soldiers got word that the Second World War had come to an end. When the news swept through the encampment on the island of Okinawa that the Japanese had surrendered, the celebrating began. Suddenly, he says, the air was filled with fireworks . . . and bullets.

It was as if every M1 rifle on the island had to be fired in order to mark the news. But he says that the celebratory mood was greatly tempered the next day. “The officers came around and took away our rifles. I didn’t even have a chance to clean mine.”

Besides sharing this memory in our interview, Chappaz recounted the story in a brief video played last week in Hawaii, on Tuesday, September 2, during the 75th Anniversary Commemoration of the end of the war and recognition of the WWII veterans still with us. In it, Chappaz adds another comment – about what was so important to him while deployed to various lethal spots of the Pacific conflict.

Fittingly, the 75th anniversary commemoration of the war’s end was held at Pearl Harbor, where Japan launched its aggression against the U.S.; and on the battleship USS Missouri (the “Big Mo”), where, on September 2, 1945, Japanese officials came to sign the surrender, officially ending the conflict.

Chappaz is one of nearly 90 WWII veterans recognized at the ceremony, 77 of them unable to travel to Hawaii, officials deciding it was best to avoid anyone being infected by the virus; 12 others were in attendance, asked to stand and be honored.

Today, Chappaz recounts his recruitment and his time in the war with a clarity of memory belying his 94 years of age. He says he first tried to join up when he was a 17-year-old attending the California School of Fine Art in San Francisco, and a friend of his was inducted. But voluntary induction meant that he had to wait until late in 1943, when he was 18.

Once signed up, he was told he would be joining an Army engineering group that would allow him to use his art training to develop maps and other graphics; but that group was deployed without him since he hadn’t yet gone through basic training. He thus was assigned to an battalion supporting the Air Force, with duties that were, literally, much more down to earth.

His first basic training stop was March Field Air Force Base (Riverside, California), clambering over obstacle courses and hiking, lots of hiking – first four miles, then six, then eight . . . and a final hike of 26 miles, medics trailing behind to pick up those who couldn’t make it. But they all finished, Chappaz says. “It felt good because we had done it.”

From there, on to Florida and “somewhere in the bush,” he says. What he remembers most of the four months preparing him and his buddies for the field was a distinct lack of nightlife, extended drilling, and living in rough cabins, the floors made up of miscellaneous boards with “snakes crawling around underneath.”

The recruits then boarded trains to Seattle, from there to Hawaii and then on to the island of Guam. He says that the 41 day voyage to Guam on a troopship was the most harrowing of four different ocean deployments during his time in the service.

Once on Guam, the battalion worked to build three airfields, two of them still in use today, he notes. Bulldozers were used to clear the ground, but first some rather interesting preparation was required. His group was trained to use their rifles, bayonets attached, to poke into the dirt to detect “unexploded ordinance.”

And supposing, you did touch one? we asked. “We were expendable,” he says, matter-of-factly.

To support the airfields, water was needed, but the primary source was on the island’s interior. To provide it, a lengthy pipeline had to be laid to the base, with Chappaz and the others assigned to protect those doing the construction.

After 11 months on Guam, his final port of call came in June of 1945. His group again boarded ship, this time heading to perhaps one of the most dangerous spots of the entire war, the island of Okinawa, where more than 40,000 U.S. soldiers were killed or wounded digging the Japanese out of their caves, tunnels and gun emplacements.

Cleared of the enemy, Okinawa was considered key to ending the war since bomber flights from there were able to reach Japan. In preparation for the planned invasion, Chappaz’s battalion was set to work improving the airfields, highways and the island’s overall infrastructure.

Then came word of the war’s end . . . and the celebration.

Rather than being quickly discharged and sent home, Chappaz had to stay on for several weeks because he lacked the necessary “points” – totaled up by having, for instance, a wife, children or other key responsibilities back home – for early release.

As a result, he was still on Okinawa during another of the most fraught experiences of his time there:  a typhoon featuring 130 mph winds that levelled nearly everything, the primary refuge from the storm being the deep entrenchments for defense that had been built by the Japanese.

Once back home, the GI Bill enabled Chappaz to return to art school, complete his degree and go on to begin work in the commercial arts field. His career as a commercial artist — spent primarily in Chicago – was, he says, the kind of work tending to rule out marriage. “I was married to my work. It’s always deadlines, deadlines and late nights. No woman would put up with that.”

Then, in 1985, Chappaz relocated to Escondido to support his parents who were in their 80’s.

For our interview, he brings a folder of photos highlighting his Army experience, his memories providing details about the grit of those we term “the greatest generation.” It is obviously the most indelible experience of his life, the stories he recounts with a mixture of humor and pride in the resourcefulness of his fellow soldiers, their endurance, their triumph . . . and their sacrifice.

From this wealth of memories, what, we asked, stands out most markedly of all? “I enjoyed the comradeship of the guys,” Chappaz says. “I came into my own in the service.”

The commemoration of the war’s end is authorized by the Department of Defense, and yearly continuation of the event is supported by National Co-Chairpersons Bob Dole, Elizabeth Dole and sponsor Linda Hope, representing the Bob Hope Legacy.