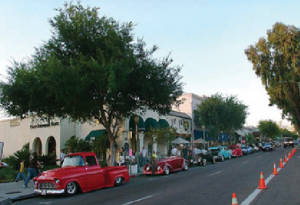 Steve Waldron, impresario of Escondido’s iconic 27-week celebration of America’s most popular art form, the car, expects 700 plus members of the Goodguys Rod & Custom Association to Grand Avenue to inaugurate the first Friday of the 18th annual Cruisin’ Grand.

“We’re going to have a big opening night for our 18th year—Eighteen years of hot rod bliss,” said Waldron.

They will bring 700 cars from all over the U.S.A, including rods, customs, classics, muscle cars and trucks through 1972.

The date of the first night is March 31, (not April 7, as was incorrectly reported on the city of Escondido website and repeated by this paper in last week’s edition) because Waldron always wants to include the Goodguys in the evening, from their weekend appearance at the Del Mar Fairgrounds in the Goodguys 17th Meguiar’s Del Mar Nationals, where they have 2,500 cars or so.

Also appearing that first night will be the Willys Americar. Most Friday nights will have host clubs. This first Friday will be different, except for the fact that there will be reserved parking for the Willys auto club, which is a Cruisin’ Grand tradition. Willys Overland Motors, which designed the first Jeep for World War II—will be brought to Es-condido by the Willys Club of America. The Willys Americar was manufactured from 1937-1942.

“We are trying to bring more attractions,” said Waldron. “This year we are working on Nitro Night. It will be the largest Nitro ever.” Nitro Night is the last Friday of the festival. “We may have as many as seventy top fuel cars.”

Making an event bigger that already is pretty darned big is a constant challenge for Waldron, who proudly notes that National Hot Rod Association (NHRA) car guru Steve Gibbs has “named Cruisin’ Grand as the top car event in the nation.”

Waldron is hoping that Shirley Muldowney, known professionally as “Cha Cha” and the “First Lady of Drag Racing,” will be at the event—her pink dragster will definitely be here. Tommy Ivo “TV Tommy” aka “The Barn Stormer,” is also expected to attend as will “The Swamp Rat III,” which was driven by Don Garlits.

In April, there will be a “dedicated truck night,” although the exact date hasn’t been set. This night will be set aside for the C-105A Chevy truck, which was popular in the mid-1960s.

For each of the 27 nights there will also be three bands playing and a DJ at different locations along Grand Avenue. “This year we had three hundred bands want to be part of it,” said Waldron.

Just how BIG is Cruisin’ Grand? We asked Waldron to confirm whether it attracts half a million people. “If you figure in Nitro Night, which attracts 30,000 and Fire Truck Night, which typically attracts between 10,000-12,000 on September 15, and which is very popular with fire and police because of the 9-11 association, it could be as much as 500,000 for the twenty-seven weeks,” said Waldron.

In June, the San Diego Prowlers, the oldest hot rod club in the United States, will celebrate their 70th anniversary at Cruisin’ Grand, followed by a 70th anniversary picnic at Grape Day Park the day after.

“These people, when they came back from World War II were racing jalopies, which were called ‘gow jobs’ before they were called ‘hot rods,’” said Waldron. “They started running around and racing and they called themselves ‘the prowlers.’ We will have the honor to have them here.”

He added, “We will have a lot of cool stuff. We will have Chris Banner and the Batmobile on selected nights.”

Waldron continues to love to do Cruisin’ Grand because of his passion. “My passion for the old hot rods. I was raised with those cars. It’s second nature to me. I enjoy the people that are in this hobby.”

Many people in Escondido pursue the hobby of restoring and driving classic cars. “There are people in this city who are so amazingly talented,” said Waldron. “It’s a sub-culture of awesome people. They are charitable and they love their cars.”