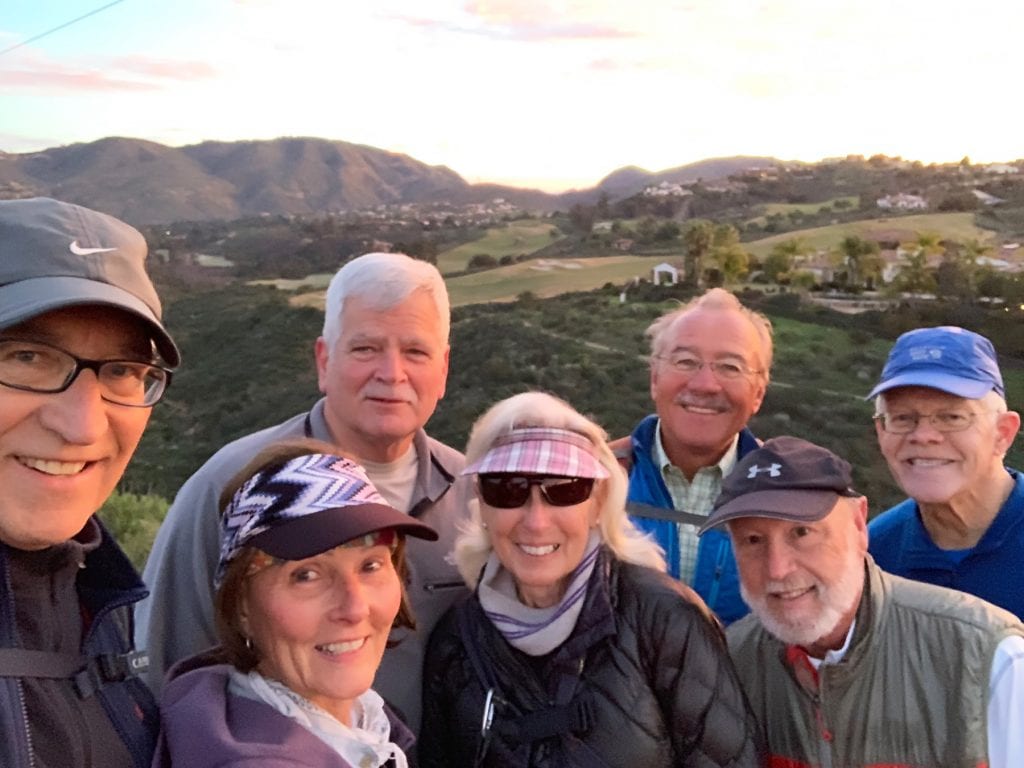 Charlie Kahle and 6 other hikers that completed last year’s C2C Challenge in a day on January 27, o2019. Picture is from the Santa Fe Valley Trail. From left, front row is Werner Berger, Brenda Marshall, Bobbie Wright, Craig Robertson. L-R on the back row are Charlie Kahle, Elmar Zanforlin, Chuck Banker

Recently, 65-year-old Charlie Kahle of Escondido, reported to the executive director of the San Dieguito River Valley Conservancy, Trish Boaz, that he completed the Coast to Crest Trail Challenge in one day on his mountain bike on January 4.

“I thought it would be considerably easier than hiking the trails in a day, but I must say, I was pretty well gas’ed on a few of the hills on the last trail I did, Santa Ysabel,” said Kahle who had to “hike-a-bike” it on the hills on either side of the creek crossing. “They were very steep!”

Kahle said it probably didn’t help that he hiked the almost 4,000 feet of gain on El Cajon Mountain on New Year’s Day, then rode 62 miles and climbed 3100’ on his road bike on the following weekend. “It might not have been the best plan,” he said.

This is Kahle’s third go in one day at the Coast to Crest Trail Challenge. Last year he was in a group of seven hikers who completed all five segments in a day, and another with a group of three. Kahle added, “I must say they did make it a bit more difficult this year by increasing the total mileage to almost 30 miles!” 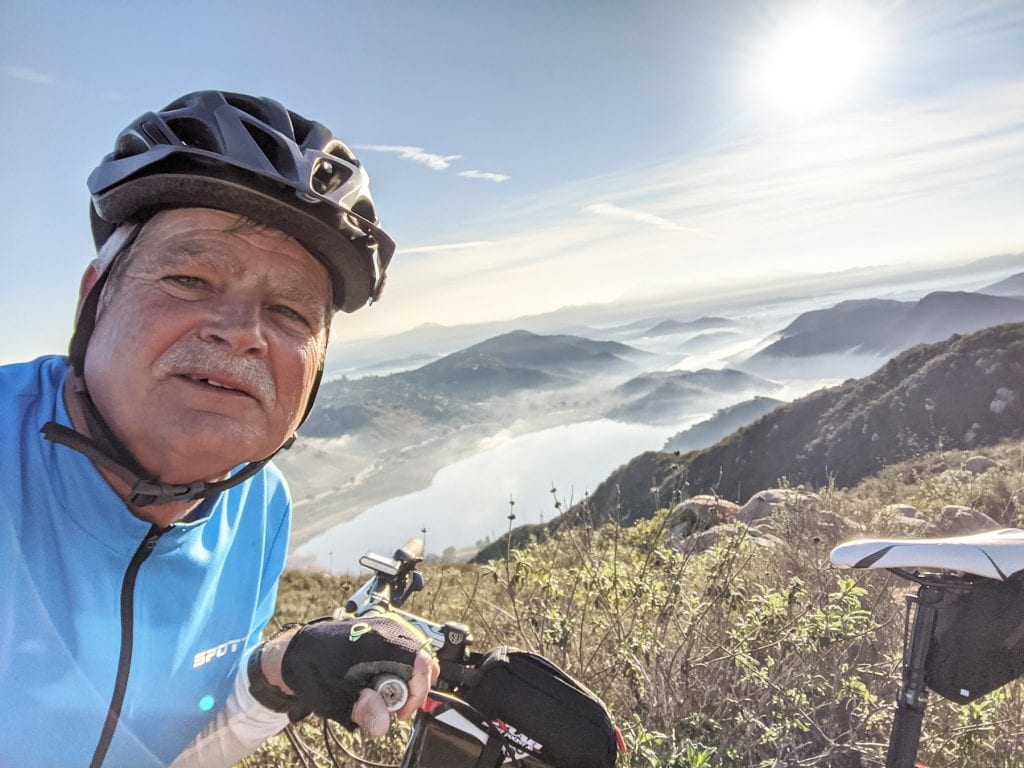 Always enjoying being outdoors, Kahle started mountain biking about 12 years ago to get more fit. “I mostly rode at Daley Ranch on Saturdays near my house in Escondido but have also been on most of the major mountain biking trails in the county,” he said.

About eight years ago he read an article in the San Diego Union-Tribune about a man who hiked Mt. Whitney from the portal, doing doubles in one day. “He was only a few years older than me and that got me intrigued as to whether I could also complete more challenging activities,” said Kahle. “That led to me taking up hiking in the mountains.  I really enjoy being on top of mountain peaks. It is often a spiritual feeling and certainly a feeling of great accomplishment given how hard it can be.”

Kahle has hiked Mt. Whitney twice and continues looking for hikes that would be a bit more challenging than the norm. That led him to completing very challenging hikes such as Adventure 16’s 3 Peak Challenge in 24 hours, hiking Mt. Baldy, San Gorgonio and San Jacinto; and rim-to-rim at the Grand Canyon, each in a day.

Of course, to do the above means you have to be a very active hiker throughout the year, so over the last eight years he has hiked all the major trails at Mt. Baldy, San Gorgonio, San Jacinto, the Palomars, Cuyamaca Peak, Anza-Borrego, and more.

The feeling of accomplishment that comes from successfully completing this level of challenge keeps feeding the desire to do more.  “Being healthy is really a gift, but one you have to work to maintain, and no better way to do so than to continually challenge oneself,” he said.

About three years ago Kahle bought a road bike and started cycling with the Trek group. The Trek stores sponsor a twice-a-year Century Training ride program, which lead up to a Century (100 mile) Ride at the end of each series.  Over the past three years he has ridden five 100-mile rides with them and is currently planning to ride in the Palm Spring Century ride in February, and of course, ride with the Trek group again this year.  So, he is now splitting his time between cycling, both on the road and off, and hiking. 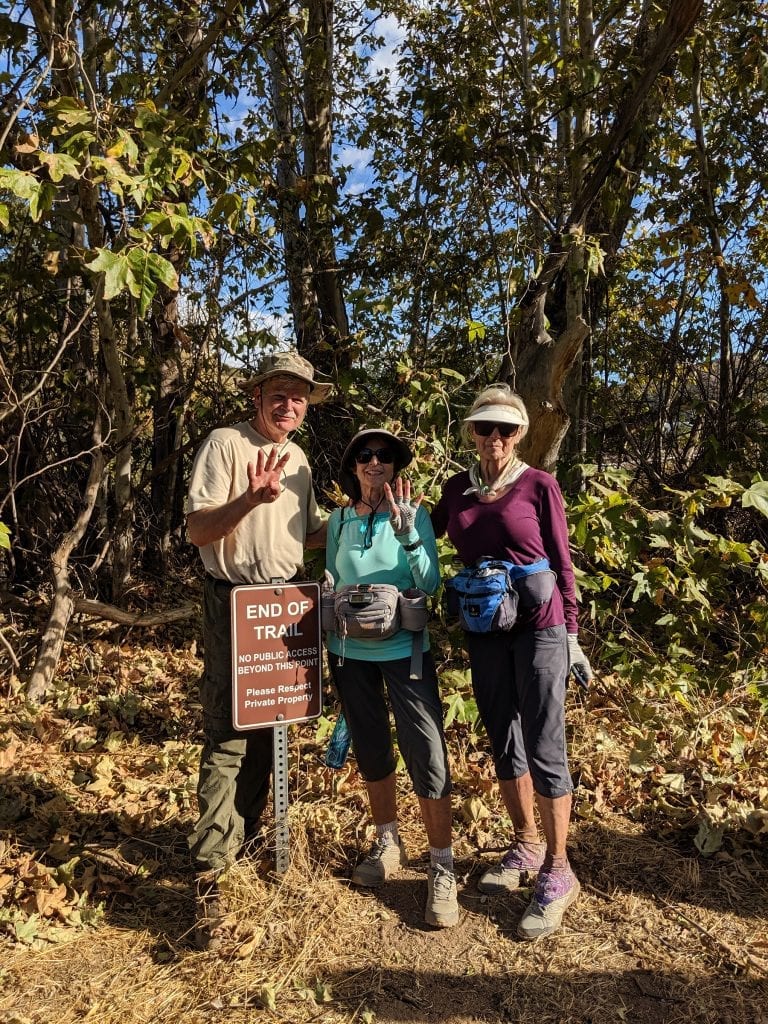 Charlie Kahle and two other hikers that completed this year’s C2C Challenge in a day on November 2, 2019. Picture is from the Highland Valley Trail (it was the 4th they completed that day). On the picture, L-R are Charlie Kahle, Dedette Edwards and Bobbie Wright.

Kahle says he really enjoys the variety of trails that are available in San Diego County and Southern California.  “The Coast to Crest Trail system is arguably the best example of the variety of trails, scenery, habitats, wildlife that San Diego County offers, and I am so grateful for the vision of the people who have undertaken to build and maintain this trail system,” he said.

“Of the trails in this year’s Challenge, it is hard to beat the early morning view of Lake Hodges from the Hodges Overlook of the Del Dios Highlands trail, but I equally enjoyed the beauty of the rolling foothills at the north end of the Santa Ysabel West trail,” he said. “Growing up on a dairy farm in the Midwest, seeing the cattle on that trail also brought back many fond memories. It is also something most people wouldn’t normally associate with San Diego.”

All this while Kahle works full time as the Chief Technology Officer (CTO) at Ubig Security, a small, local software company which provides solutions that secure any type of data in a unique and very secure manner. He really enjoys the people he works with and the technical problems they are solving.

The challenge is that participants must complete the five designated hikes in any order, on their own time. This year’s Coast to Crest Challenge is from  July 1, 2019, to June 30, 2020.

For more information and to register for the Coast to Crest Challenge visit, sdrvc.org/sdrvc-2019-2020-coast-to-crest-trail-challenge/