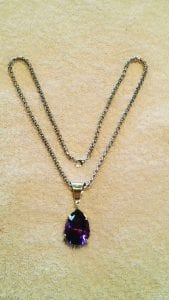 This amethyst pendant will be one of two grand prizes at this weekend’s event.

The 63rd annual Gem, Mineral and Jewelry Show will be held at the California Center for the Arts, Escondido June 3-4.

Both days the show opens at 10 a.m., and on Saturday runs until 5 p.m. and on Sunday until 4 p.m. California Center for the Arts, Escondido, is located at 340 N Escondido Blvd.

A little-known history of San Diego County is its mining history.  In the gem and mineral world, San Diego is famous for its gem mines that produce tourmaline, garnets, morganite (a stone named after J.P. Morgan), kunzite (named after George Kunz, mineralogist and buyer for Tiffany and Company), and other gems.  The Palomar Gem and Mineral Club honors that mining history with its 63rd annual Gem, Mineral, and Jewelry Show.

This show is the first as chairman for Archie Kuechn, an Escondido resident. “The Escondido show is special in that it really celebrates North San Diego county’s gem and mineral history. A hundred years San Diego county was a major producer of colored gemstones. Such as stones that were sent to the Dowager Empress of China.”

At that time, says Kuechn, “there was a little bit of a gem rush in San Diego county. Anywhere from Ramona, which produced world class garnets, to Pala and Mesa Grande that produced tourmaline. When Tiffany’s was here they discovered two new types of minerals: Kunzite and yellowish goldish beryl named Morganite after one of their best customers, J.P. Morgan. Both were new discoveries. Escondido was one of the largest cities between here and the gemfields. Our show loves to celebrate that history.”

Beautiful mineral specimens, cut gems, gem rough, fossils and eye-catching jewelry made from gems and minerals may be purchased.  Demonstrators will be showing their skills to attendees and giving them the opportunity to learn about some of the lapidary arts promoted through the local club including faceting, silversmithing and other arts. There will also be gem identification.  Find out what gem is in the ring your grandmother gave you.

And you don’t have to be weighed down with gold to be able to afford something at this show. Kuechn said, “The neat thing is there is something for everyone. You can spend $10 or thousands of dollars. There will be a wide variety of vendors. Not all will be selling gemstones. Some will have finished jewelry and ‘It Came From Outer Space’ meteorites. We will have a woman from the Jewelry Exchange who specializes in amber. The Roynon museum will be there with some fossils. We have a little bit of everything. It’s very eclectic.”

There will also be demonstrations. The club, founded in 1955, is one of the oldest Escondido clubs. It has a full lapidary shop for people who want to facet or make jewelry. You will be able to see how to do that at the show.

There will even be a rock treasure dig for kids. Cost to attend is $5 for Adults.

The club will also be raffling off items donated by their vendors, and will have two grand prizes:  a 35 ct amethyst pendant cut by member Charles Shupe, and an amethyst tower.    You do not need to be present to win.

The club, which has about 100 members, meets monthly the 3rd Wednesday of each month (except August) at 6:30 p.m. at Redwood Terrace, 710 W 13th Ave., Escondido. There are educational speakers every month featuring people who are experts in their area.