3rd annual Veterans Stand Down will be Feb. 7-10 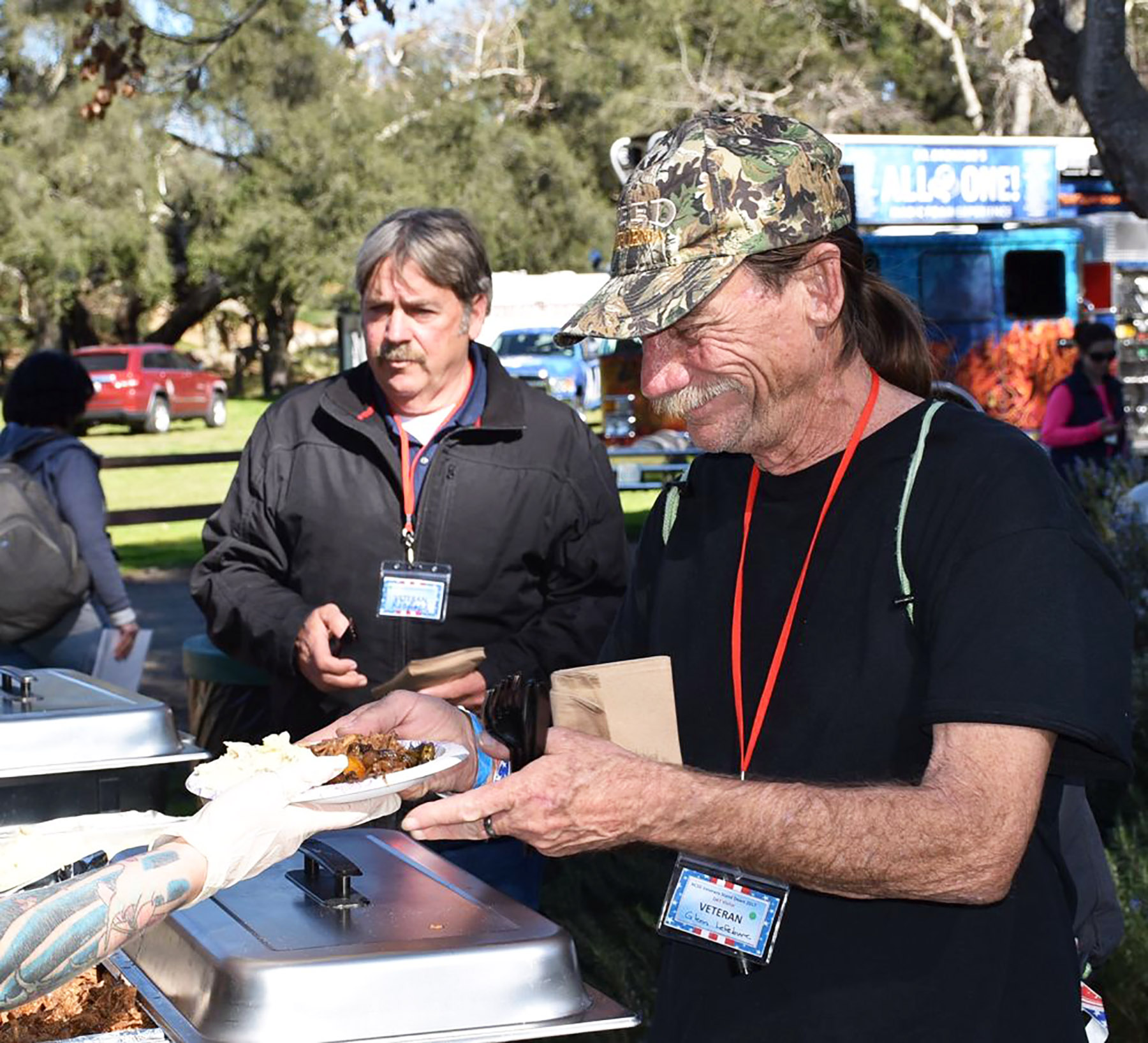 A smiling vet gets some morning chow at last year’s Veterans Stand Down.

When Marine Gunnery Sergeant Matt Foster was in the service during the second Iraq War, he was known for taking care of the men and women who were under his command.

“Gunny” Foster (as they say in Marine parlance) recalls: “My Marines would ask me for help and I could help them easily with things that they might have to wait for hours if they went off to do it themselves—especially if someone made them wait for hours.” He could show up and he outranked all the guys who he would be dealing with and they were quick to process his requests.

He was happy to do things like that and to tell his Marines, “Here’s your problem. It’s fixed. The look on their faces was my drug of choice,” he recalls.  He helped the guys in the shop who worked for him. “They knew I had their back.”

Foster, who is an Escondido resident, was raised by two devout Catholics. “Doing things for people is second nature to me,” he says. “It’s something I learned from my parents—to help others. It’s my own therapy.”

Today, as a retired Marine he does the same thing for other servicemen. He has their back. Five years ago he took over as commander of the Escondido-Valley Center Veterans of Foreign Wars (VFW.) “It took me a while to figure out how to help.” From that desire evolved the North County Veterans Stand Down.

He frequently helps keep veterans from being evicted or gets them back into their apartments. Veterans will frequently call him asking for help, just as his Marines used to when they served with him. He sees it as a challenge. “And I like a challenge,” he says.

When the challenge of doing a “Stand Down” in North County came up, Foster said, “Oh hell! That’s a really big challenge but let’s see what we can do.” 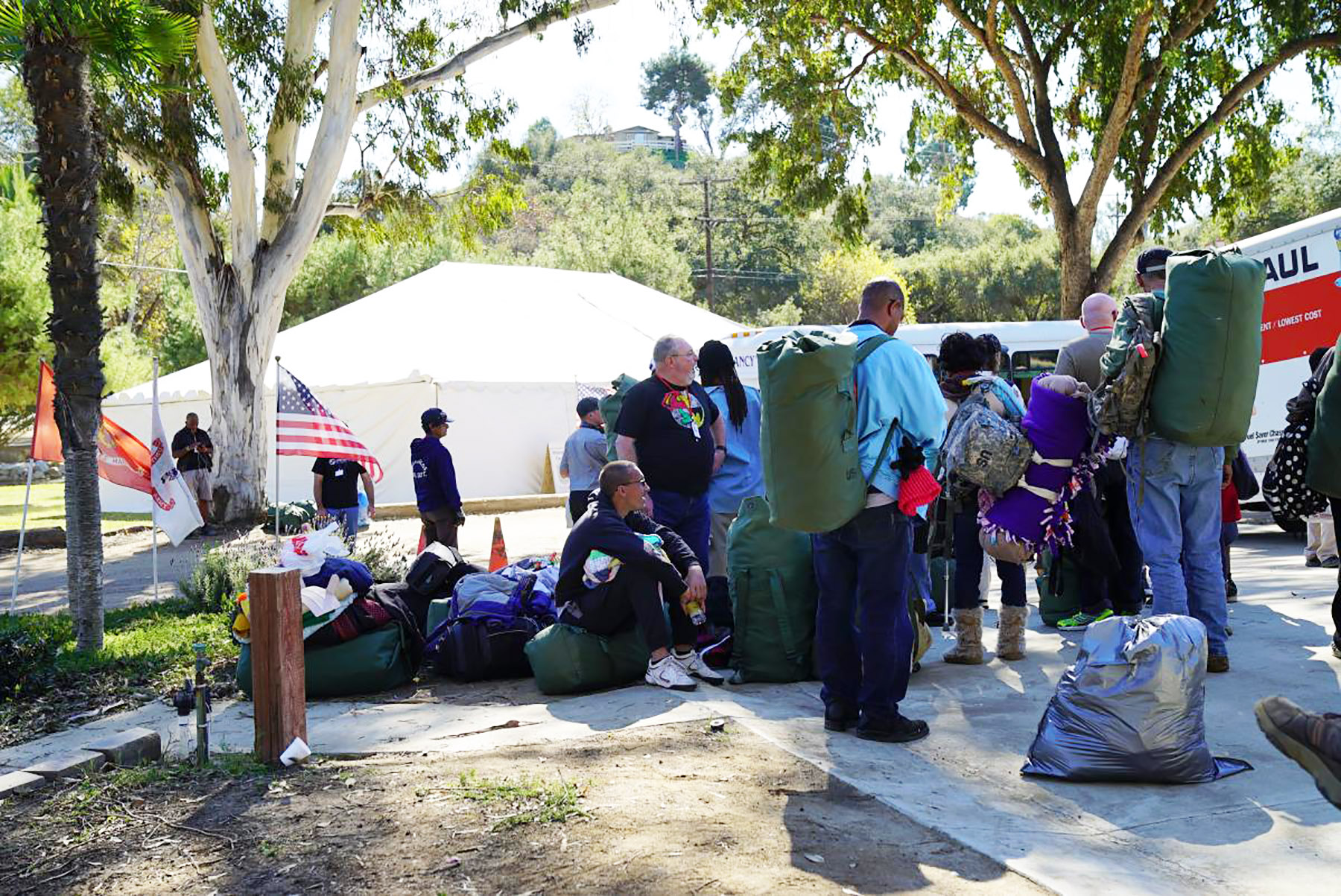 The last day of the 2018 Veterans Stand Down.

Foster is chairman of the 3rd annual North County Veterans Stand Down, which will be held February 7-10 at Green Oak Ranch in Vista, 1237 Green Oak Rd.

The first Veterans Stand Down was in San Diego 31 years ago. The North County version naturally evolved from that.

For those who are not familiar with the military, and that is an increasingly larger percentage of our population, the term “stand down” might sound strange.

Foster explained, “When a unit is in battle and you send it to the rear lines and relative safety that’s called ‘standing down.’ ”  The unit is, in effect, coming back “home” to its base “where they can take a shower, get a hot meal and talk to their buddies about their front line losses,” says Foster. “They need that time to process.”

“The first day they have their hard faces on,” says Foster. “By the second day they have had a shower and they feel human again. They look like a regular person.” They get the idea that perhaps they can improve their lot in life.

As their quality of life changes for those four days, so does their outlook. “The message is ‘People care about you,’ ” says Foster. “We give them hope to change their lives.”  That hope can lead to concrete results. “At the second Stand Down, we got thirty-two veterans into housing. That’s the idea—and to get them to think about being productive.”

“We create the environment so vets have one stop shopping,” says Foster. One of the most vital things they do is provide transportation to the event. “Homeless veterans don’t have transportation,” he says. “We transport vets to the event.” Part of the application for a veteran attending the Stand Down asks, “Where do we pick you up?”

They rent 15 passengers vans, “And we drive like crazy!” says Foster. Last year they transported 172 veterans and families. About $77,000 in court fines were forgiven. Thirty veterans were placed in housing. There were over 100 eye exams with 150 pairs of glasses made onsite. Twenty-two were given a total of $16,000 in dental work. “This year we are looking to double that,” he says.

This year they will have 250 plus available beds. They will provide more services, identify and assist at risk veterans and increase community participation.

Other services that will be provided include barbers and pedicures, which are very helpful because the men are on their feet a lot.

Shoes and socks are also a vital necessity—and for the same reason. As Foster observes, “Most men I know wear their shoes until they are falling apart. It’s hard to find good shoes for the homeless because they are all worn out.”

This year, for the first time, they will be joined by some groups that are keyed towards younger veterans, and veterans who might be active on social media. This includes veterans who, while not on the street, might be living on a couch at a friend’s house. These groups include Triple B Adventures. To quote its website: “Through outdoor adventures we give veterans a sense of belonging they may have lost since transitioning out of the military.”  Another new participant is VETogether, which has over 500 followers on Facebook @VETogether76.

Another new sponsor this year is Dr. Bronner, which will attend and provide soap and bring their “fire truck,” and the Magic Foam Experience. The truck sprays participants with soapy suds, leaving them “refreshed and tingly.”

It’s hard to grasp that someone would put attending college above finding a place to live, but to Foster it’s simple: “They are looking for a better life.”

How can you help? “We need veterans, volunteers and donations,” to make the project a success this year, says Foster.

“Veterans served their country,” points out Foster, noting that because there is no draft that the veterans of the wars that followed the Vietnam War chose that path. Only 3% of the U.S. population today have served in the military. The mainstream often does not understand what people who served experienced. “Sometimes it screws them up,” says Foster. It often leaves deep yet invisible wounds. “But deep inside they have that discipline. It’s a matter of bringing that out and focusing them on being a member of the community again.  I think there’s hope.”

Foster adds, “We are talking about people who stood up and said, ‘I’m helping this country.’ At the least we owe them a chance. There are enough of them to warrant using doing it. I’m happy to stop when we get the last veteran off the street.”

As a man who knows veterans intimately, Foster observes: “Veterans are funny. They won’t tell you about their problems, but they will tell you about another guy’s problem. They will be up their armpits in mud and say, ‘Go help that guy!’ ”

At last year’s event some of the tent leaders were homeless vets who had attended the first Stand Down and wanted to give back and returned as volunteers.

It costs about $140,000 to put on the Stand Down. This includes rent for the property at Green Oak Ranch, which is owned by Aerie De Jong. Green Oak Ranch is a facility that provides drug and alcohol rehabilitation. The staff will be preparing and serving the meals, although some food is donated.

Considerable support this year is again being provided by the County, with the especial help of retiring Supervisor Bill Horn and Supervisor Kristin Gaspar’s offices.

You can donate by visiting www.ncstanddown.org. Or you can send checks made payable to NCSD Vets Stand Down, 230 E. Park Ave., Escondido, CA 92025. Tax-deductible receipts will be issued.