Three Escondido students were among 26 exceptional 2017 Don Diego Scholarship Foundation recipients who come from north, south, east and west around San Diego County and are headed to educational institutions across the country.

Some will attend agriculture-centric universities such as Cal Poly SLO, UC Davis and Oklahoma State. Others will matriculate at prestigious schools like Stanford, Wellesley and MIT. Some are remaining close to their California roots at SoCal colleges. All 26 are undeniably going places, propelled by an unprecedented $63,500 in Don Diego scholarships.

Chair Jon Liss reports, “Our selection committee faced a challenging process. Offering college scholarships ranging from $1,000 to $10,000, we received dozens of applications from outstanding students. After finalists underwent rigorous interviews, the winners emerged. We invite people to meet our impressive Class of 2017 at our June 22, \Gala & Frankie Valli Concert at the Fair.”

Scholarships were open to students countywide who participated in the San Diego County Fair and/or other activities associated with the Del Mar Fairgrounds. Awards were in the categories of 4-H, FFA (funded by the Walter J. and Betty C. Zable Foundation), Exhibitor/Participant (funded by the Rancho Santa Fe Foundation) and Employee. In addition, two Vocational/Technical (Voc/Tech) and ten Junior Livestock Auction (JLA) scholarships rounded out the program.

Three of the 26 scholarships were captured by students who live in Escondido. 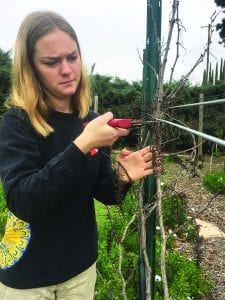 Katherine (Kate) Golden of Escondido won a $2,500 scholarship in the FFA category. She plans to begin pursuing a major in International Agriculture Policy at Palomar Community College. Katherine graduates with a 3.8 GPA from Poway High School, where she has been an active member of the Poway FFA and Agriculture Department, serving as FFA Chapter President and winning many awards and accolades.

Saying that Kate attended Poway High specifically for the ag program, Poway FFA Advisor Mary Martineau relates, “Kate is one the most motivated and dedicated FFA students I’ve ever had. She received her CA Golden State FFA degree as well as her award for her Southern Region Winning Proficiency in Viticulture; she placed second in the State! Kate works at local wineries to help them maintain their vines and also become Certified Sustainable! I’m extremely proud of her and all that she has accomplished!” 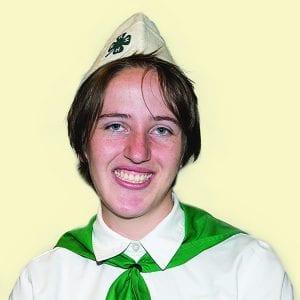 Alisa Marks will be attending Canisius College in Buffalo.

Alisa Marks of Escondido won a $1,000 scholarship in the 4-H category. She graduates with a 3.5 GPA from San Pasqual High School and is headed to Canisius College in Buffalo, New York to major in Animal Behavior and Ethology. Alisa reveals, “My 4-H experience is like a pirate on a search for treasure. Every discovery is a benefit.” She is a dedicated 4-H leader who over the years has raised turkeys, meat and exhibition chickens, rabbits, cavies, dogs, market goats and beef cattle. Among the accolades is this high praise from San Pasqual High educator Jennifer Elbert-Rasumussen, who has known Alisa for several years. She says, “I have never heard Alisa utter one negative statement about another person.”

Sage Drohan of Escondido won a $1,000 scholarship in the Junior Livestock Auction (JLA) category. She graduates from Escondido High School and will pursue a major in Horticulture at Cuyamaca College. As of 2017, Don Diego Scholarship Foundation now administers the Fair’s longstanding JLA scholarship program. 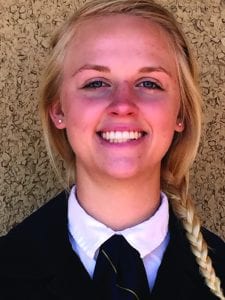 Sage Drohan will pursue a major in Horticulture at Cuyamaca College.

The Don Diego Scholarship Foundation was named for Don Diego, AKA Tom Hernandez, who served as the Fair’s welcoming goodwill ambassador from 1947-1984.

To date since its inception in 1986, the Foundation has awarded approximately $862,000 in scholarships to 204 students and in agriculture education grants. More information is at www.dondiegoscholarship.org and www.facebook.com/DonDiegoScholarship.