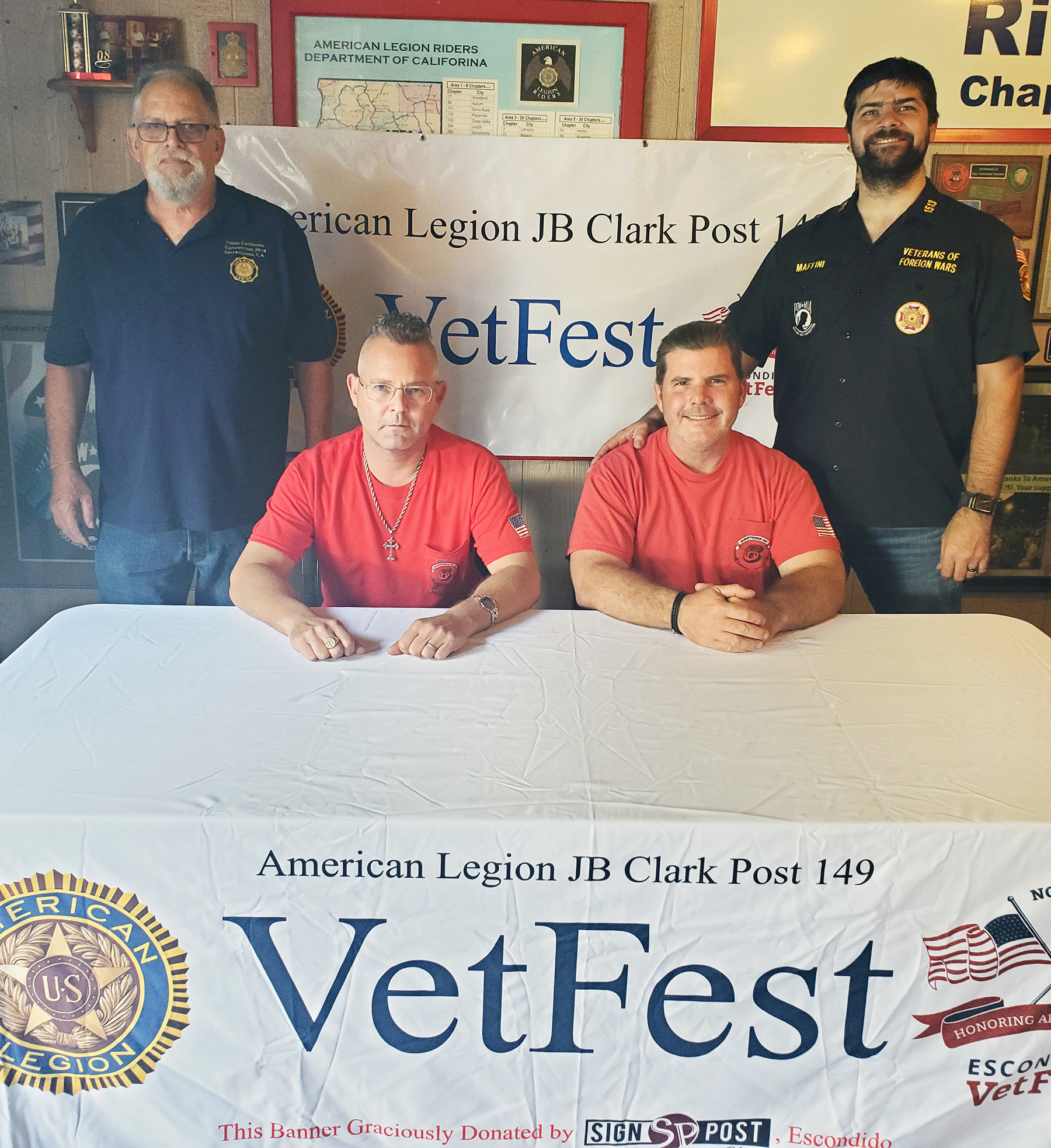 The 2nd annual VetFest, “Celebrating Hometown Heroes,” will be held November 13, with the parade kicking off at 9:30 a.m. along Grand Avenue and other patriotic events, food and live entertainment at American Legion Post 149.

San Diego County is home to an estimated 240,500 veterans, the third highest number of any county in America. It is estimated that 7,348 of those veterans live in Escondido.

November 13 will be the day that Escondido chooses to honor them.

The celebration is being put on by American Legion Post 149, Veterans of Foreign Wars, and Brothers of 6.

Some known participants in the parade will be the American Legion Riders, United States Marine 3rd Air Wing Marching Band from Marine Corps Station, Mira Mar and a celebrity grand marshal whose name will be announced later.

The Times-Advocate this week spoke to the two co-chairmen for the event, Stef Holden and Bill McNaughton, who explained that the first event—in 2019— was held on Veterans Day, which limited how many were able to attend because not every person has that holiday off from work.

“Turnout was good but it could have been so much better,” said Holden. “This time we’re going to ensure that the entire city can participate.” November 13 is a Saturday.

Also, the parade route along Grand will be extended. Last time it began at Escondido Boulevard and ended at Juniper. This time it will take in an additional block to Ivy.

Anyone can enter the parade. And it’s free. The purpose is to honor any and all veterans, men and women, who served in World War II, Korea, Vietnam, Desert Storm, Afghanistan and all other wars the U.S. has participated in.

Two years ago the parade had more than 40 entries. “We’d love to get at least that, if not more,” said Holden.

Some activities that will be in the second VetFest  that weren’t in the first include a Veteran Art Show Auction and Sale, at the American Legion post beginning at 12:30 p.m. at 230 East Park Ave. To find out how to submit art works, visit Esconvetfest.org and follow the links.

A storefront competition is open to any businesses along Grand Avenue or the side streets to participate with patriotic decorations.

There are also links for those who want to volunteer to help with the event. According to Holden, “It takes a good seventy-five people to run this thing.” Although the two veterans organizations, the Church at Rancho Bernardo and the Brothers of 6 will be providing volunteers to do things like do traffic control—they can always use more help.

There is another link for organizations or individuals wanting to be a sponsor. The parade will include sponsored displays at Maple Square. Including static displays, such as vintage military vehicles.

In addition to the art show, there will be a wine tasting sponsored by Cheval Winery.

After the parade, at 12:30 p.m., there will be a solemn ceremony honoring veterans alive and dead, followed by several keynote speakers.

Lunch, including food from three vendors, will be served at the American Legion Post after the parade, including barbecue, pizza and Mexican cuisine catered by Sierra Madre Cantina. There will be a nominal fee.  Music will be provided by the Jesse Cox Syndrome. 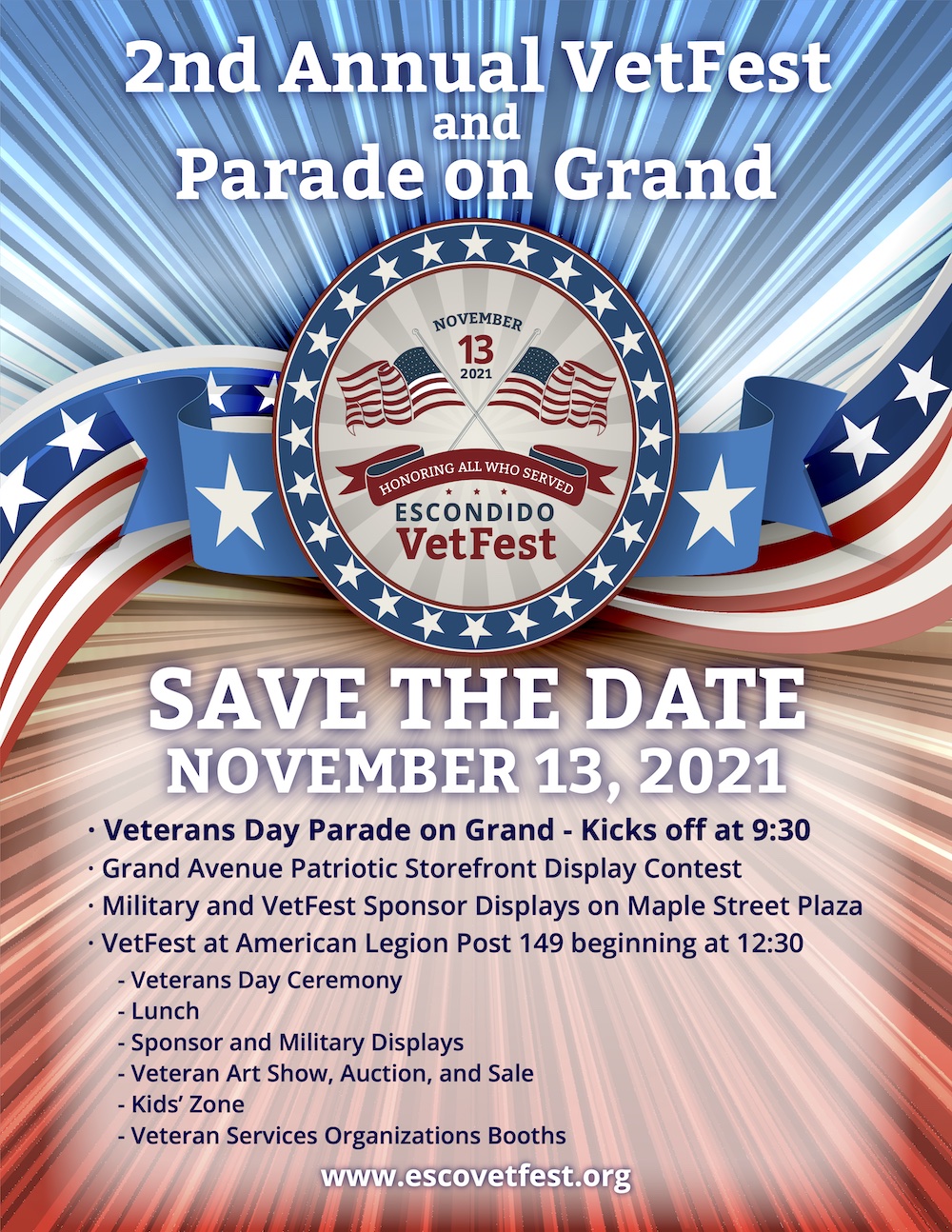