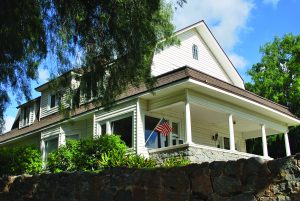 The northwest corner of the Bradbury House, built in 1905. Photos courtesy of Carol Rea

The Old Escondido Historic District will host its 20th annual Mother’s Day Home Tour this Sunday, May 14, with five historic homes that will be open for touring from 11 a.m.–4 p.m.

Visitors can expect the neighbors and other volunteers to be smiling a little bigger during this tour as, once again, five historic homes will be open to the public on Mother’s Day.

The oldest home on the tour this year, the Dailey House, was a fairly small brick house, built around 1890. Its walls were built of brick from the Escondido brickyard, which was vital to the region’s early development since wood was scarce and its transportation expensive. Additions to the home over the years, covered in clapboard, have created a more modern interior with vintage accents that make living there comfortable and pleasant.

The Bradbury House was built in 1905. A larger, Dutch Colonial style house featuring the traditional gambrel or “barn-like” roof, it has been home to only two families in its 112-year history.

Another large house on the tour, this one with a similar look, but with a more typical gable style roof, was built in 1909 by a German family, the Stammers. Its completion was featured in a San Diego Union article on January 22, 1909 and many details about the house were shared, including the 13,000-gallon cistern located underneath the house, one that still provides water for irrigating the spacious yard.

The Carroll House is believed to have been built in 1925. A smaller bungalow, this house has many intact original features, was built by Bernard Carroll. The Carroll family was a pioneer family and Carroll Canyon bears the name of the Bernard’s father, Thomas. Bernard built multiple bungalows in the area as well as numerous structures in the nearby downtown and his son was pivotal in designing and implementing the “Eternal Flame” memorial honoring President John F. Kennedy at Arlington Nation Cemetery.

The “new kid on the block” is a house that’s only 61 years old, but it’s a classic mid-century modern with original details throughout, maintained by the same owners from the time it was built until just last year when it was sold for the first time. Built in 1956 by William Brothers and his wife, Phyllis, this cedar-covered house with open-beamed redwood ceilings has an Eichler feel.

A trademark of the Old Escondido Mother’s Day Home Tour is the always lovely refreshment garden with its linen-draped tables and floral arrangements, this year to be situated at the Stammer House with close to a 360-degree view.

Nearly 30 years ago, an ice cream social at the very same house kicked off the ambitious drive to turn what was a seriously deteriorating neighborhood into the city’s first Neighborhood Group. This district reaches from 5th Avenue on the north to 13th Avenue on the south, and from Escondido Boulevard to Chestnut Street.

Becoming a neighborhood group opened doors for grants and encouraged neighbors to roll up their sleeves and improve the area. Now, the neighborhood is one of Escondido’s finest and houses on the market are snapped up quickly by buyers taken in by the area’s charm.

Tickets for the Mother’s Day Home Tour can be purchased in advance for $20 each at Rosemary-Duff Florist, 101 W. 2nd (at Broadway), at Major Market on Centre City Parkway, or at the Escondido History Center on the north side of Grape Day Park. Tickets are also available online at www.oldescondido.org.

Any child under the age of 12 can attend at no charge with a paying adult. On the day of the tour only, tickets will be available for $25 each at 537 S. Juniper St. A  full-color keepsake program with photographs and descriptions of the homes is also included in the ticket price.