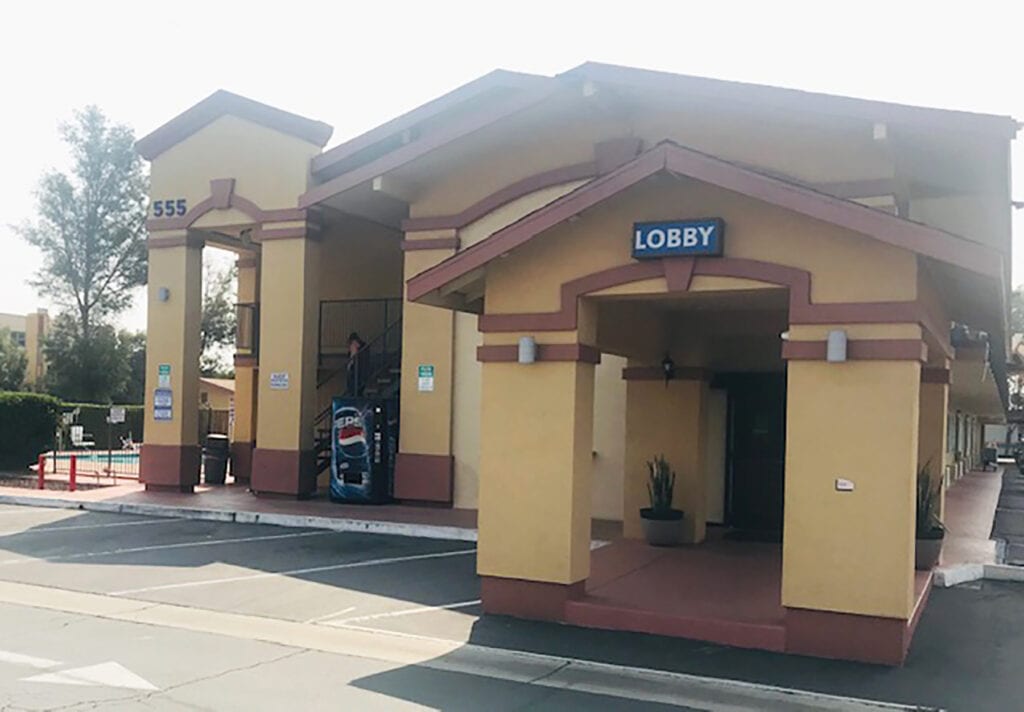 Transformation: renovations of a closed motel by Interfaith Community Services will provide many new beds for recuperative care.

Highlighting its ongoing effort to address homelessness, Interfaith Community Services last week reported plans to buy a closed motel in Escondido and convert it to a recuperative care center and temporary housing.

Announcement of the proposal — and a new program for combating racism — was made last week by Interfaith during a Zoom presentation of its 2020 Annual Report, with CEO Greg Anglea and other officials of the local non-profit emphasizing the organization’s overall focus on “helping people help themselves.”

Interfaith said it will purchase one of the motel units operated by America’s Best Value Inn & Suites (555 N. Centre City Pkwy) and renovate it to provide 54 recuperative care beds for the homeless who are discharged from hospitals but require additional healing.

Another 60 beds will be used for the organization’s interim graduate lodging program, temporary housing for people who have moved out of Interfaith’s Haven House homeless shelter.

Last year San Diego County awarded Interfaith a grant of $6 million for the purchase, but the non-profit will need to raise additional funds to cover the acquisition and renovation, estimated at $10. 1 million. It noted that “naming opportunities are available to recognize community supporters.”

Anglea said that it will launch a separate capital campaign to raise the additional funds – essentially doubling its annual budgetary requirement, of about $4, for operation of its many community services.

Repurposing of the motel follows last year’s passage of a state law requiring hospitals to create plans for discharging homeless patients recovering from surgeries or other health issues. Anglea said that Interfaith has developed partnerships with several area hospital systems that pay for provision of this service.

Interfaith said that so far it has been meeting the need for recuperative care at its Hawthorne Center – 75% of its residents moving into stable housing after addressing their health concerns, it said — but that facility is now “at capacity.”

The organization said that last year it assisted 2,048 individuals and families that were “housed and prevented from homelessness,” nearly four times as many as provided for in 2017.

During the Zoom presentation, Anglea referred to research identifying the key to a person’s overall life conditions and circumstances:  where they live, their zip code. And the annual report identifies homelessness “and a lack of affordable housing” among the organization’s major challenges — further exacerbated this year by the viral pandemic.

It described this initiative as a training program, the curriculum “finalized” and its details being developed to make it “accessible and engaging.” Interfaith said that the plan is for faith leaders to conduct the training for church congregations and other faith communities of all kinds.

So far, “a dozen faith leaders” have agreed to offer the anti-racist program, Interfaith said. Among those committing to providing the training is the Episcopal Diocese of San Diego, with its “42 congregations, including 15,000 members,” Interfaith said. It noted also that “currently the Multi-City Racial Reconciliation Coalition consists of faith leaders that are doing this outreach and have committed their faith communities to the training.”

The organization’s annual report says this initiative underlines “the moral imperative of speaking out against racism and in support of the victims of racism.” And it noted “the inexorable link between racism, poverty, homelessness, and trauma.”

In the annual report, Interfaith cited its historic stance against racism:  that in 1979, its “faith leaders united to block a local white supremacist march,” and that this was the catalyst for a coalition which formed Interfaith Community Services.

The organization also noted its support in identifying “opportunities for local governments to fund services and programs to support communities of color.”

Interfaith said that it has launched a new research project “to more fully demonstrate short and long-term impacts of our housing interventions.” This is part of a “new agency-wide database” to enhance its ability to track the performance of its programs “allowing us to better connect the over 20,000 people we serve annually.”

Interfaith said the COVID-19 pandemic resulted in a 90% loss of its volunteers and staff support. But a total of 1,145 people stepped up to enable continued operation of its existing programs and the additional work required in response to the crisis.

During the early months of the pandemic, Anglea hosted a series of webinars providing a survey of the services offered by Interfaith in response to the emergency circumstances.

“The community,” he said, “immediately responded with incredible support,” so that Interfaith was able to take on the added costs and additional assistance for the many more people needing help.