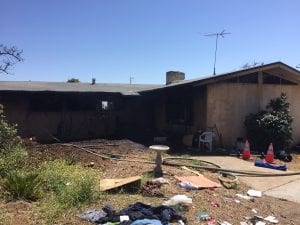 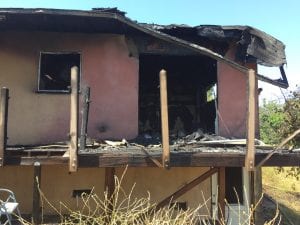 On June 4th 2017 at approximately 1:14 PM, the Escondido Police and Fire Communication Center received a report of smoke coming from a home located at 2599 Hass St. A structure fire response was dispatched to the location.

The first arriving engine reported a single family home with heavy smoke and fire coming from the South side of the home. A second alarm was requested to contain the potential of the fire to spread to the vegetation outside the home. Initial reports stated someone was possibly inside the home. Aggressive action by the firefighters contained and controlled the fire in approximately 25 minutes. A search of the home was conducted after the fire was controlled, there were no victims located inside. In all, seven fire engines, two trucks, two rescue ambulances and three Battalion Chiefs responded to the fire.

Three residents were displaced as the fire and smoke damage made the home uninhabitable. The Red Cross was requested to provide accommodations and support to the displaced persons. In addition, the Escondido Fire Department provided financial assistance to the residents through the California Fire Foundation’s Supplying Aid to Victims of Emergency (SAVE) program.