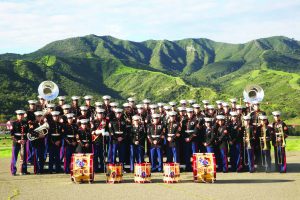 In this annual, free concert, the 1st Marine Division Band regales audiences with their masterful renditions of everything from “The Star Spangled Banner” to “Ajax,” the theme song of an upcoming children’s book.

The 1st Marine Division Band will perform its annual concert at the California Center for the Arts, Escondido at 7 p.m. on April 4 and 5. The performances are free to the community.

Camp Pendleton’s finest musicians will return to the California Center for the Arts, Escondido, for the first week of April, to entertain audiences during the 1st Marine Division Band Annual Concert. This year’s concert is especially meaningful as it is the 75th anniversary of Camp Pendleton, and will feature performances that will showcase the incredible talent in the ranks of the 1st Marine Division Band.

In this annual, free concert, the 1st Marine Division Band regales audiences with their masterful renditions of everything from  “The Star Spangled Banner” to “Ajax,” the theme song of an upcoming children’s book. The book, “Ajax Bound For Glory,” written by the local author Sarah E. Dautel, was inspired by her attendance to the 1st Marine Division Band’s countless performances. Dautel will be visiting a local school to read “Ajax Bound For Glory” as well as attending the upcoming Marine Band performances where she will be selling and signing copies of her book.

The band will perform Tuesday and Wednesday, April 4 and 5, at 7 p.m. in the Center’s 1,500-seat Concert Hall. While admission is free, concertgoers will need to reserve their seats in advance due to the popularity of the show.

The 1st Marine Division Band consists of 50 Marine musicians. In May of 2015 the band travelled to Belleau, France to perform with their French counterparts at a Memorial Day ceremony held in honor of the 97th anniversary of the Battle of Belleau Wood. In 2007 and 2011, the band was awarded the “Colonel George S. Howard Citation of Musical Excellence for Military Concert Bands” administered by the John Philip Sousa Foundation. The band was also recognized as the Marine Corps Band of the Year in 2009.

All Marine Corps Bands fulfill the objective of preserving the values that comprise the unique and fundamental national strength and character of the United States. Whether performing music or serving in a combat zone, the 1st Marine Division Band carries on this esteemed tradition and remains the Pride of the Division.

Learn more about the 1st Marine Division Band and its history here.

The Center is located at 340 N. Escondido Blvd. in Escondido. The Ticket Office can be reached at 800-988-4253. Tickets can also be purchased online. To learn more, including performance dates, times and ticket information, visit www.artcenter.org.