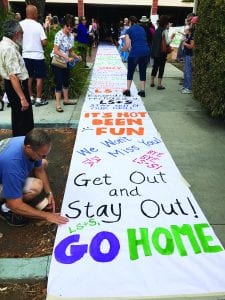 70-foot-long unwelcome mat to let LS&S they are unwelcome here.

About 150 opponents of outsourcing the Escondido Public Library to the private contractor Maryland-based Library Systems & Services (LS&S) Saturday morning continued their campaign to keep this issue in the public eye as the city negotiates a contract with the company.

They unrolled a 70-foot-long “UnWelcome” mat at the entrance to the library. The paper “mat” bore a variety of hand-written messages, none of them warm and friendly.

August 23 the council voted 3-2 to negotiate a contract with LS&S; with Mayor Sam Abed, John Masson, and Ed Gallo voting yes and Olga Diaz and Mike Morasco voting no. The council will meet in closed session Wednesday of this week (this edition will have already gone to bed at that point) to discuss the negotiations on September 20 and could consider a contract in October. We will report any news that comes out of the September 20 meeting in the following issue.

On Saturday, the protestors made calls and videos, collected petition signatures, and sang songs to keep the library run by city staffers and, as they declared, “operated by, for, and accountable to the public.”

Some messages written on the mat and on hand held signs included “We don’t want you, we don’t need you” “LS&S not welcome here,” and messages in Spanish. Some made short video messages to send to the President and CEO of LS&S, Todd Frager, and Argosy Capital, owners of LS&S.

An example was 30-year resident Brenda Townsend, who declared, “Our library has been here 123 years without you and we can go another 123 years. We don’t need you, we don’t like you, and we don’t want you. Stay where you are. Leave us alone.”

Communities That Have Divorced LS&S

Last week The Times-Advocate reported that last year Jackson County received a report highly critical of the job that LS&S has done running its library system for the past ten years. The Jackson County Library Services Performance Review and Quality Assessment determined that the library met 37% of “essential specifications” as set out by the Standards for Oregon Public Libraries.  The report also held up the company for its “lack of transparency” when it came to finances.

This week we learned of two more communities that have parted ways with LS&S in the past, in 2007 and 2012.  In The Monitor, a Texas-based newspaper, reporter Elizabeth Findell in 2012 in “San Juan fire library managers,” wrote that the San Juan City Commission voted to terminate the contract with LS&S, which had operated the library for five years.

“The company proposed continuing to operate the library for the current $281,686 annual tab, plus a 3 percent employee cost-of-living increase. Expanded services the city had requested, including additional teen programming, Sunday hours, more books and a seventh employee, would cumulatively add $120,000. . . Commissioners declared that cost for the added services unacceptable and nixed the company, overruling Mayor San Juanita Sanchez and 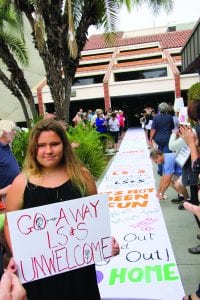 A young library patron with a message to Library System & Services.

opting to see if the city could add hours and staff for less money.”

The mayor had defended LS&S, which had overseen moving the library from a 2,500-square foot trailer to a 16,000 SF permanent building and had offered to run the library for $281,696 plus 3% cost of living salary increase.

In May 2007, the city of Calabasas, in Los Angeles County, following the recommendation of its library commission, voted to end its contract with LS&S and move to in-house administration.

The city had withdrawn from the LA County Library system in 1998 and contracted with LS&S for library services. The commission calculated that the city would reduce staffing costs (which were $516,700) by $68,959 by bringing the staff in house.

Of course, despite the fact that these two cities ended contracts with LS&S, the company continues to operate 80 public libraries in California, Texas, Tennessee, Kansas and Florida, with by far the majority in California.  LS&S’s takeover of the Riverside County library system in the 1990s is considered a success story. It was Temecula’s library, in Riverside County, that Escondido Mayor Sam Abed enthusiastically praised and held up as an example of where he would like the Escondido library to go in the future when he explained his vote on August 23.

To view a video of Saturday’s demonstration, go to: