The weather has changed at City Hall. One might even call it a climate change that was evidenced rather early in the first meeting of the year where the new majority was in charge. The council moved quickly to address a call by Mayor Paul McNamara: “Some people think economic growth is somehow in conflict with environmental awareness…and I think […]

God’s Identity Is Yours!

“But now you have arrived at your destination: By faith in Christ you are in direct relationship with God. Your baptism in Christ was not just washing you up for a fresh start. It also involved dressing you in an adult faith wardrobe—Christ’s life, the fulfillment of God’s original promise.” (Galatians 3:26-27).   God’s original plan for mankind was […] 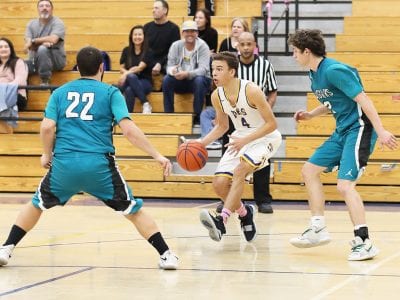 In a bang-up Valley League contest that featured five dramatic lead changes down the stretch, host San Pasqual converted two late drives to the hoop that enabled it to eke out a compelling 64-61 victory over Valley Center last Friday night. With a raucous crowd responding with resounding roars to every shift in momentum taking place during a thoroughly entertaining […]