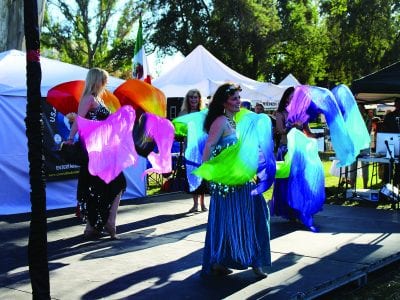 Grape Day fest October 7 will celebrate Escondido’s heritage The Escondido History Center is gearing up for its big event of the year, the Grape Day Discovery Festival on October 7, 2–8 p.m. at the center, located at Grape Day Park. If entertainment, rather than shopping is your game, this is the event for you. This year’s theme is “Party […] 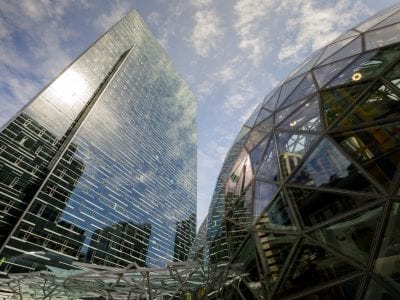 Amazon has announced what amounts to a nationwide “bidding war” to site a second Amazon headquarters on par with its Seattle campus (see photo). Yes, the company is so big, it needs two headquarters. Last week, Amazon released a Request for Proposals (RFP). Only one submittal per metropolitan area will be accepted. Escondido is partnering with the SD Regional EDC […] 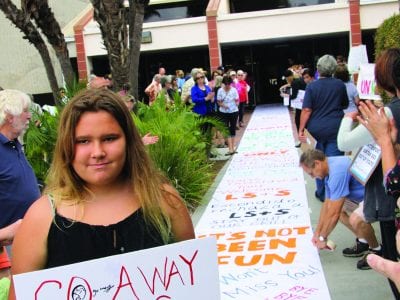 About 150 opponents of outsourcing the Escondido Public Library to the private contractor Maryland-based Library Systems & Services (LS&S) Saturday morning continued their campaign to keep this issue in the public eye as the city negotiates a contract with the company. They unrolled a 70-foot-long “UnWelcome” mat at the entrance to the library. The paper “mat” bore a variety of […] 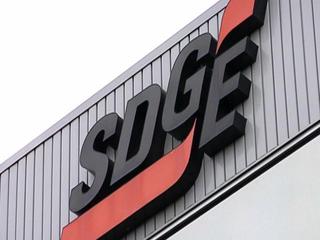 Escondido is fast becoming a “solar city,” one that, according to San Diego Gas & Electric Co. (SDG&E) ranks second only to San Diego in the number of Net Energy Metering solar customers. As Escondido prepares to make an ambitious bid to be part of a consortium of cities that would welcome a second Amazon headquarters (see story this page) […]

Rejoice, comrades! All is going precisely according to plan!

~ Guest Opinion
Southpaw ~ a leftie living in a ‘rightie’ world

That title is obviously having a little fun with the belief of many righties that every leftie is, at heart, a commie. That observation is, of course, ridiculous with no data to back it up, but I’ll tell you something that is infinitely easier to prove: That Donald J. Trump is, at heart, a liberal (the “J” stands for Lenin!) […]

The Legislature has adjourned

As the 2017 legislative session closes, I am pleased that most of my bill package received overwhelming support, and three of my bills have already been signed into law by Governor Brown. Six of my bills are on the Governor’s desk, including AB 1386, a Legislative Woman’s Caucus priority bill to raise awareness for newly diagnosed breast/ovarian cancer patients about […]

I’m always reluctant to criticize firefighters, who are, this time of year especially, the unquestioned heroes of California, and of the entire nation. Still, questioning an organization of firefighters is really not the same as criticizing individual firefighters, so I’m going to ask flat out: Why would the California Association of Professional Firefighters have led the fight to make it […]

Letter to the Editor: THERE IS ALREADY AN “ELECTION COMMISSION”

Editor, Times-Advocate: We already have an “election commission” it’s called the Registrar of Voters and every county in the state has one. The Registrar uses another state agency the DMV, to identify and certify mailing address to register a voter. The DMV has rigid rules in place for issuing ID’s. One can also register without using DMV by visiting a […]

Letter to the Editor: MISSING AN IMPORTANT POINT

Editor, Times-Advocate: Reading over your commentary on Voting Rights and Voter Fraud, I think you missed an important point, and that’s how many there would be on either end of this equation-people voting illegally vs. people not able to vote because they do not own a picture ID. First, the illegal votes. In the year since President Trump declared that […]

Letter to the Editor: CITY MANAGER’S STATEMENT IS BLATANTLY WRONG

Editor, Times-Advocate: Last week there appeared in your paper a long article on the Oregon County report on LS&S services.  Deep in the article, City Manager Jeff Epp was quoted as saying, “Jackson County has been the ONLY government entity that has expressed any concerns with LSS.  Every other city, county, or library they have done business with has provided […]