Game of the Week – Classical vs. Escondido Charter 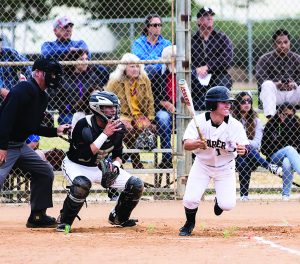 A team doesn’t win 11 out of its last 12 games, as the Classical Academy baseball club has done, without having demonstrated multiple ways of doing so.

And so on an overcast and slightly breezy Friday afternoon on the ball field at Del Dios Middle School, the latest pathway to another Caiman victory proved to be the comeback route. This rally manifested in the form of a dramatic four-run outburst in the top half of the final inning that keyed an eventual 5-3 conquest over neighborhood and league rival Escondido Charter.

With the rather theatrical win, the Caimans upped their overall record to a splendid 16-8 while improving their Pacific League ledger to 3-1, good enough for second place behind top dog Maranatha Christian (5-1). Meanwhile, the EC saw its seasonal slate fall to a still solid 13-10-1 while its PL record dropped to 1-3.

Just when it seemed as if the host White Tigers were primed to exact some sweet revenge for a lopsided 11-1 loss they had suffered at the hands at the Caimans just two days before, things quickly and rather stunningly unraveled.

Having pitched a scoreless sixth inning that was punctuated by his blowing an amped up fastball past Caiman Noah Dull, EC reliever Devin Stinnett seemed more than capable of closing things out and preserving the 3-1 margin that he had inherited. But the freshman right-hander committed the cardinal sin of walking leadoff hitter Dane Kelsey in the seventh and that helped put in motion a remarkable reversal.

The muscular Ian Peters was up next and he soon added to Stinnett’s dilemma by slicing a 3-2 pitch into right field for a critical table-setting single. A pinch runner then came on for Peters. Shortly thereafter, a wild pitch moved the respective runners up 90 feet. 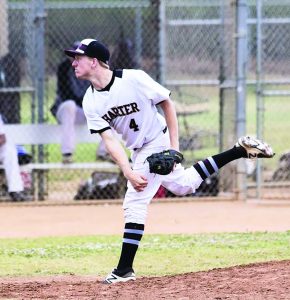 EC right-hander Matthew Coe was solid and efficient in his five innings of work.

With the tying runs now in scoring position, it was Jake Mizel’s turn and the athletic senior didn’t disappoint. Mizel, who is also Classical’s ace starting pitcher, pulled a shot into shallow left-center field that chased home two runs and made this a brand new ball game at 3-3.

As the EC crowd groaned in disappointment at the sudden turn of events, over on the other side of the modest stands, the Caiman faithful had come alive. And things were about to get even better for the Classical supporters.

After another wild pitch advanced Mizel to second, Classical’s Chase Martinez gave himself up for the cause with a nicely executed sacrifice bunt that advanced Mizel over to third with just one out.

It was here that EC coach Kevin Reinking, hoping to create a double play scenario and perhaps get out of an inning that wasn’t trending positively, elected to issue an intentional walk to talented catcher Micah Anselmo. But that strategy was immediately rendered moot when Anselmo took off and stole second without a throw.

Now, it was all on the line as Caiman Trevor Blount stepped to the plate and the junior second baseman was more than up to the moment. Showing himself to be every bit as clutch as his teammate Mizel had been three hitters before, Blount ripped a Stinnett offering into right-center that plated two more runs, gave Classical a 5-3 edge and would make him the undeniable hero of the day.

Right-handed reliever Zack Jordan, who endured a somewhat shaky sixth inning in which he allowed a pair of hits and a run, was able to record the save by pitching a scoreless seventh. But dynamite EC first baseman Tony Leishman, who is raking at a stellar .513 clip on the season, made Jordan uncomfortable by kicking things off in the final frame with a rope single to left, his third hit of the game.

However, from there the sophomore hurler noticeably settled in and induced three consecutive infield outs that wrapped things up. 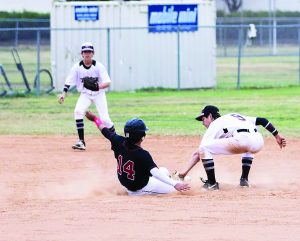 A controversial call at second ruled that Caiman Chase Martinez (14) had slid safely under the tag of second baseman Mathew Burcin. Photos by Lenny Kerbs

For the most part, throughout the first four innings of this generally well-played and entertaining contest, it was the starting pitchers that were establishing the tone although each did have to extricate himself from some testing moments.

Classical right-hander Tim Boshaw, a sophomore with real promise, used an efficient windup to generate decent pop on his fastball and his off-speed pitches were also serviceable. His counterpart was EC standout Matthew Coe, a righty who is all business on the mound. Coe appears to almost sling the ball and at times his heater can flat out explode. Not employing much of a leg kick, this gifted senior can also trouble hitters with a curve that is tight and crisp.

And so it wasn’t until the top of the fifth that the scoreboard was finally dented, although not without controversy. With two out and no one aboard, Mizel smoked a shot that found the gap in left-center and rolled all the way to the fence. Mizel was to cruise into second base with a standup double. A subsequent wild pitch would advance him over to third. The hard-hitting Martinez would then draw a base on balls.

With Anselmo now at the plate, Martinez surprised many of those in attendance by taking off for second. Not at all caught off guard by the move, the pitcher Coe stepped off the rubber with dispatch and made an accurate toss to infielder Mathew Burcin, who had hustled over to cover the bag. Of one thing there is no dispute; Coe’s throw clearly beat Martinez to the bag. So when the base umpire ruled that the sliding Martinez was safe, the reaction from the EC bench and from most of the stands was one of disbelief and incredulity.

Meanwhile, the alert Mizel had taken advantage of developments at second to race home totally unmolested. It wasn’t long before the dispute was escalating with a face-to-face between EC skipper Reinking and the under siege arbitrator. This reporter later found out that though the umpire agreed that the throw had arrived first, it was his determination that Burcin had applied a tardy tag that came after Martinez had slid in safely.

But not allowing themselves to either wallow in self-pity or become unnerved by the debatable call, the White Tigers displayed both character and grit by battling right back. It was almost as if they were using the controversy to fuel their fire.

With one away in the bottom half of the fifth, JR Lucas ignited the offense with a walk and then an aggressive stolen base in which he got a superlative jump. Soon after, the game was knotted at 1 apiece when diminutive but potent lefty batsman Tristan MacMahon turned on a Boshaw fastball and sent it screaming into the opposite field for a clutch RBI double. Burcin was able to follow that up by coaxing a walk but Leishman was retired on a comebacker. So when Boshaw got Coe to hit a bounder to short, it looked as though the inning would be over without any further scoring.

However, as the baserunner Burcin was heading from second to third, he appeared to distract Martinez who was charging in to make the play. The Classical infielder then momentarily bobbled the handle and by the time he retrieved the ball and fired over to first, it was too late because Coe had beaten the throw, thereby allowing MacMahon to sprint home with the go-ahead run.

Now with momentum clearly on their side, the White Tigers were to add to their lead an inning later when Brooks Martello bombed a two-out double over the leftfielder’s head and then came home as Lucas flared a looper just onto the cut of the outfield grass. 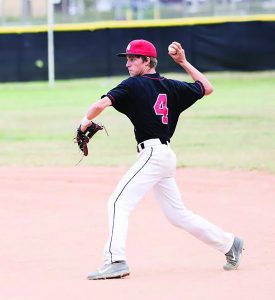 Junior Trevor Blount, who came up with a decisive two-run hit, was also a factor in the field.

Staked to a 3-1 lead and based on his commendable work in the previous frame, Stinnett seemed a good bet to seal the deal but the Caimans are nothing if not resourceful and resilient. And as if to give credence to those qualities, they staged a stirring comeback that won’t soon be forgotten.

Currently in the midst of a tremendous run, the Caimans figure to be a real threat down the stretch in both the Pacific League and then into the postseason. Classical will seek to keep things percolating this week with Wednesday and Friday afternoon encounters with Tri-City Christian.

As for EC, despite the two setbacks to Classical, this is one bona fide and very competitive ball club. Owners of a six-game winning streak earlier in the year, the White Tigers have scored 16 runs or more a rather amazing eight times this season. And man, do they have some guys who can wield those aluminum bats. Coe (.514, 38 hits, 31 RBIs) and the sturdy Leishman (39 hits, 21 RBIs and 14 doubles) have been nothing short of stellar with their prolific output. And EC also has the consummate leadoff hitter in junior centerfielder MacMahon who possesses a keen eye, gets on base, hits for average (.338) and can scoot around the basepaths.

EC’s steady pitching has also been on the plus side. The rock has been Coe who carries with him a very low ERA while Stinnett and senior Thomas Brunette (3-3, 2.61 ERA) have also been big-time contributors on the mound.

Well-coached and determined, watch for the White Tigers to bounce back this week when they take on the San Diego Jewish Academy in back-to-back games on Wednesday and Thursday. And beyond that, don’t be at all surprised if this game club makes some genuine noise in the playoffs once they commence.

There’s no doubt that when Classical and Esco Charter met on Friday, it was a matchup of two sound baseball clubs. And with the victor being able to claim some local bragging rights, there was even more incentive to come out on top. On paper, it figured to be a worthy tussle and it more than lived up to its billing. It was a tense game with more than its share of suspense.

For a while, it looked like the White Tigers were the ones destined to celebrate. But in the end, the outcome boiled down to one irrefutable fact. Simply said, Classical had staged a classical comeback.